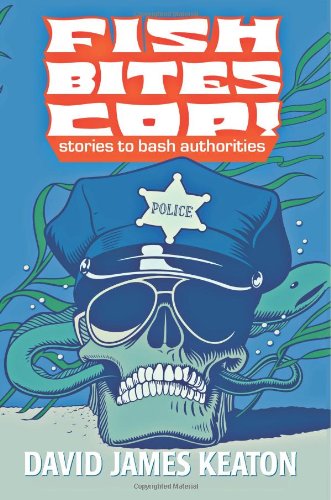 Remember that cop who wrote you a ticket for having a turn-signal out and went on to condescend you and imply that he could get you for a whole lot more but wouldn’t because he “decided to be nice?” Remember seeing the video of the off-duty Chicago police officer who got drunk and beat up a bartender, sending her to the hospital?

Remember that gym teacher who called you names and told you that you’d never amount to anything? Or how about the bully in your class who, after pushing you into the lockers and calling you names, you decided would probably go on to become a cop? David James Keaton does, and in Fish Bites Cop! he serves up some harsh, fictional revenge via darkly tinged humor and masterfully worded punches.

Released earlier this year (2013) through Comet Press, home of dark crime and horror stories (including Deadcore, a collection released in 2010 that features the author’s novella Zee Bee & Bee (A.K.A. Propeller Hats for the Dead)), Fish Bites Cop! Stories to Bash Authorities is a collection of short stories by David James Keaton.

The genre stylings of the book vary, going from the dark horror of “Greenhorns” to the hilarious and brutal revenge of “Killing Coaches,” then swinging over to the misguided with a twist of the peculiar crime story “Nine Cops Killed for a Goldfish Cracker.” Jedidiah Ayres, author of F*ckload of Shorts and Fierce B*tches, says it best in his foreword to the book (awesomely titled “Use Your Allusion”): “…Keaton’s characters are blessed/cursed with preternatural abilities to avoid the brunt of natural consequence until it’s matured into something damn near apocalyptic.”

Enough backstory, backstory, backstory, on to the content of the book. The very first story, “Trophies,” successfully sets the mood for the next two-hundred and seventy-some pages. To turn a two page story into a two sentence synopsis, a lazy cop pulls someone over and ends up having his head blown off, causing it to pinball across traffic before getting stuck under a lowrider. The same lowrider ends up winning third place in a competition, where the decapitated skull is found, along with a whole bunch of other things, drawing the comparison to opening the stomach of a shark. It is at once brutal and hilarious, and this is just the beginning.

There are many highlights to this collection. “Life Expectancy in a Trunk (Depends on Traffic)” is a fairly obvious, very biting criticism of a certain bounty-hunter who resembles a broke-down Hulk Hogan and has a reality show. The afore-mentioned “Greenhorns” is a horror story that goes in an unexpected and excitingly original direction. Jake, after competing against a number of other potential crewmembers, finds himself selected to join what he believes to be a crab fishing boat. As time goes on, the new crewmembers begin disappearing and Jake is told that they couldn’t handle the stress and went home, but things may not be as they seem. There is a bizarro-style western called “Three Ways Without Water (or The Day Roadkill, Drunk Driving, and the Electric Chair Were Invented)” that is followed shortly after by “Either Way it Ends With a Shovel,” a 2012 Spinetingler award winner for best short story on the web. You get a story about a guy cutting those fake testicles off of big pick-up trucks (“Castrating Fireman”) as well as a story about a first date that devolves into following a police officer who tries to intimidate them after a random traffic stop (“Doing Everything But Actually Doing It.”)

But the absolute best stories (in my opinion, of course) are when Keaton delves into the prison setting, which brings us to “Queen Excluder” and “Schrodinger’s Rat,” two of the wittiest, most brutal stories of the entire collection. Without giving away too much, “Queen Excluder” is the story of a small town getting a prison built in it and what happens when the inmates somehow get all of the citizen’s phone numbers. “Schrodinger’s Rat” is a Sherlock Holmes-like story involving the new guy in prison, a cat program for the inmates, toilet phones, and toy airplanes. I’m not going to give further details because I want you to discover them for yourself. Let me just say this: these two stories alone make this collection well worth the cover price.

It’s not just the genius of the plots that make David James Keaton’s stories amazing, it is the writing. The stories included in Fish Bites Cop! remind you of the stories that that one good friend can tell, the ones that drag you in quick and keep you listening, the ones that you could hear told over and over and never tire of them. These are the types of stories that writers like myself wish they could write, the kind that make people smack their own foreheads and say “Damn, why didn’t I think of that?” And no matter if the plot delves into unseen monsters beneath the sand or high-school gym teachers or power-abusing police officers, every single story demands that you take a pause and breathe deeply for a moment before moving forward. The intensity is almost intimidating.

Fish Bites Cop! is to fiction what The Dicks Hate the Police record is to punk. It is original, it is intense, it makes you wish you had been there. And after all is said and done, it makes you laugh at the same time as you cringe, which, in my opinion, is what makes life great. It is the Hot Fuzz of the literary world, and I mean that in the highest of compliments.