Land of Shadow and Substance: A World of Difference

And yet another tale from the late Richard Matheson makes its way into the land of both shadow and substance. But, it isn’t what sets this episode apart. That honor goes to a fourth wall. 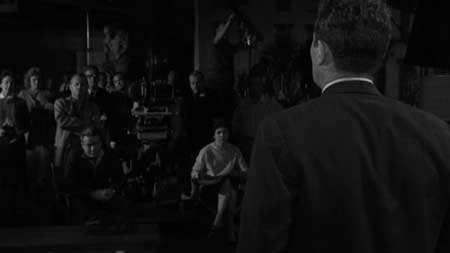 Director Ted Post wanted to film a continuous transformation shot that would change what initially appeared to be a standard office into a movie set with the off-screen players looking on. To accomplish this, Post reached into a magician’s bag of tricks and had a wall built on rails that could be silently moved while filming. The shot is flawlessly pulled off and the effect is incredible. Therefore, be sure to watch for it at the beginning of this episode.

Nervous breakdowns can take many different forms. Sometimes the person simply shuts down and won’t let anyone in. Other times the person finds themself in a completely alternate universe, and that is what this episode is about, the surrogate or substitution. 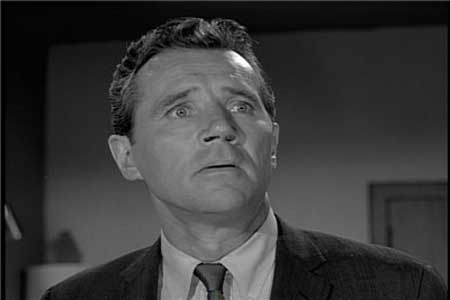 Arthur Curtis (Howard Duff), an apparent businessman, dutifully enters his workplace, makes small talk with his secretary Sally (Gail Kobe), discussing his daughter Tina’s upcoming birthday party and gives instructions for her to reschedule a planned trip to San Francisco before stepping into his office.

At his desk, he picks up the telephone, intent on calling his wife and finds that the line dead. Suddenly, someone yells “Cut!” Obvious confusion reigns over his face as he looks up and finds that he is actually on a soundstage being filmed.

Director Monty Fisher approaches, inquiring whether or not he can play the part and make the simple call. Upon noticing that something is obviously wrong with his star, he tells Endicott (Peter Walker) to keep an eye on him and requests an ambulance, indicating that Gerald Raigan, a nearly washed up and drunken has been of an actor, was having a nervous breakdown.

With no comprehension as to what is occurring and with everyone referring to him as Raigan, each imploring him to realize that he is only playing a character named of Arthur Curtis. Raigan doesn’t believe and continues to insist that he is Arthur Curtis, a man with a wife and small daughter. 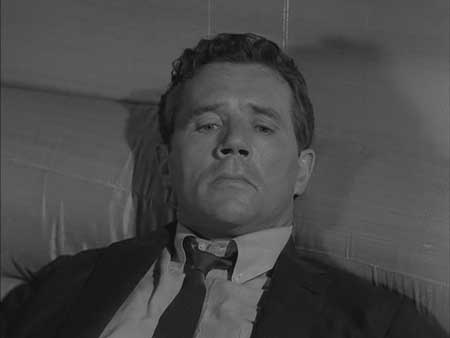 Frantically searching the set, he finds a working telephone and picks up the receiver. Wanting to dial, he refrains, unable to recall his home number, and the same bewildered look falls over his face. He dials the operator, gives his address, which he seems to remember, only to be informed that there is no telephone listed at that address. He pleads with the operator, saying it is his home, but it is to no avail.

Rushing out of the building and into the travel area he nearly walks in front of a car driven by a ruthless and shrewish Nora, his real-life wife. Of course, he doesn’t recognize her, but that doesn’t stop her from belittling and telling him that he is going to pay dearly in their upcoming divorce proceedings. Pushing her aside, he commandeers her car, intending to drive to his home. Before he can pull away, she climbs in the passenger side.

At Ventnor road, where he believes is his home, he spots a little girl, her back to him, playing in a yard. Rapidly approaching, he calls out his daughter Tina’s name and spins the little girl around. Obviously, it is not her.

Despondent, Nora chauffeurs him to his actual home, which yet again, he doesn’t recognize. Upon entering the home, his agent Brinkley (David White) is waiting and informs him that if he loses this acting job, he will be done for, that no studio will ever pick him back up.

Still puzzled, he phones an operator and asks for the listing to the Davis Morton Company. Told that there is no such listing he yells at the operator, saying that he’s worked there for the past 7 years, and is hung up on. All this is overwhelming and he collapses.

When he wakes, Brinkley is there, voicing empathy with his client’s plight; being under terrible strain; burdened with pending divorce; overworking. From the shooting script he begins reading off the film’s cast of characters and their roles, hoping to trigger a memory and snapping him out of the delusion. But, it doesn’t work as Raigan maintains that he is Arthur Curtis. Brinkley resorts to informing him that while he was out, he had heard from the studio and they are cancelling production.

The revelation throws Raigan into turmoil and he emphasizes his need to get back, to find his wife and daughter. Brinkley mentions that they are probably in the midst of tearing down the set and that it would be of no use. Raigan flees and drives like a maniac back to the studio.

Finding himself back in the office at the set, he sits down in the chair, lays his head down and pleads under his breath to not be left there.

Suddenly, there is a light that comes over him and he looks up. A few moments later, Marian (Susan Dorn), his wife walks in asking where he’s been, that she has been phoning him all day. Relieved, he takes her into his arms saying he doesn’t want to lose her and implores for them to begin their San Francisco trip right away. And, after saying goodbyes to Sally, they go.

Brinkley shows up on the set and inquires whether Raigan has been there. He is told yes, but that no one has seen him since and he walks away.

The camera zooms in on the desk, to a shooting script titled “The Private World of Arthur Curtis.” Gerald Raigan, a onetime actor, has fully disappeared.

Land of Shadow and Substance: A World of Difference