Home | The Return of Monster Magnet

The Return of Monster Magnet 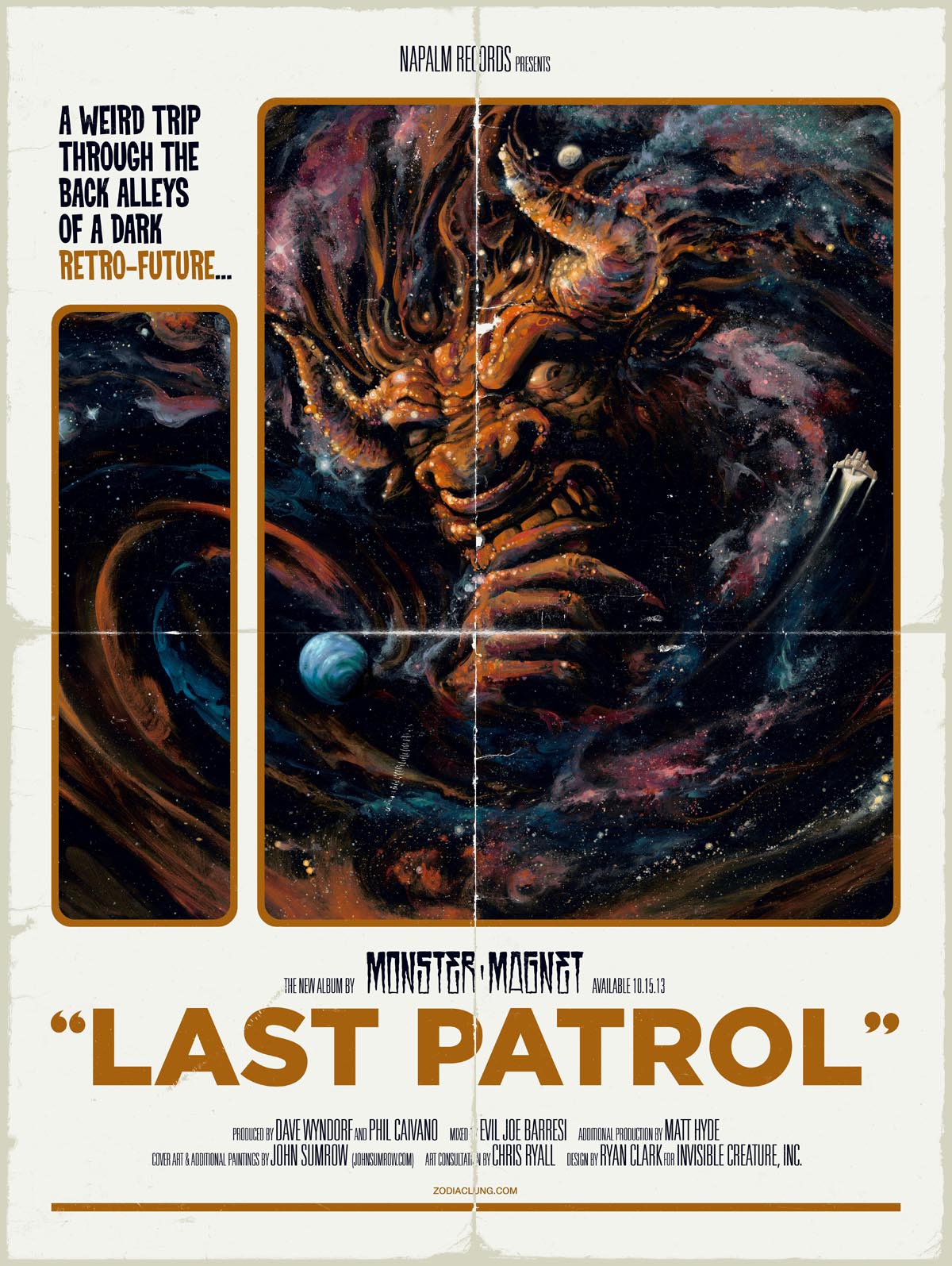 MONSTER MAGNET are back! The band has confirmed an October 15th North American release date for their new album entitled Last Patrol via Napalm Records. Today MONSTER MAGNET has unveiled the artwork and tracklisting for Last Patrol. Dave Wyndorf and Phil Caivano produced Last Patrol, whileEvil Joe Joe Barresi mixed the album with additional production duties handled by Matt Hyde. The artwork was created by Johun Sumrow with consultation coming from Chris Ryall and designs by Ryan Clark for Invisible Creatures Inc. The album will be available as a Limited Edition CD, standard CD, 2LP and digital format.

In support of Last Patrol, MONSTER MAGNET will be embarking on a full-blown North American Tour! Although the band has toured Europe relentlessly over the past decade, this is MONSTER MAGNET’s first full North American tour in over 10 years! The band is eager to hit the road in the states for the first time in what seems like forever. Prepare to hear MONSTER MAGNET classics and new cuts from Last Patrol for the first time live! Support will come from Prosthetic Records artist Zodiac. The tour is scheduled to kick off November 14th in Grand Rapids, MI and will run through December 14th in New York, NY.

Frontman and MONSTER MAGNET mastermind Dave Wyndorf checked in with his thoughts about Last Patrol:

“Last Patrol is a return to our roots in terms of vibe and recording style. It’s full-on psychedelic space-rock with a 60’s garage feel, recorded almost exclusively with vintage guitars, amps and effects in our hometown of Red Bank, NJ. The songs are a kind of Space-Noir, tales of cosmic revenge, peaking libidos, alienation and epic strangeness. It’s a weird trip through the back alleys of a dark, retro-future, which not by coincidence very much resembles my own life. (laughs) The lyrics aren’t fantasy really, rather a recounting of my musings on, observations of and general emotional reaction to my life and environment during a 1 week writing period in February of 2013. But I tend to use the vernacular and imagery of science fiction and surrealism to express myself and that’s where these lyrics get trippy. There’s also our cover version of Donovan’s “Three Kingfishers” which I thought fit the mood of the album.”

“Last Patrol was produced by Phil Caivano and myself with an effort to bring a home grown feel to the whole affair. We had been doing smaller projects out of Phil’s “Studio 13″ recording space and I really felt comfortable there so it was the natural choice on where to record the next full-scale Monster Magnet album. Phil and I grew up together and have a shared love of some very particular vintage music and styles. And everybody in the band played their asses off on this one.”

Today the first song from Last Patrol is receiving its exclusive premiere courtesy of The Obelisk. Check out the song entitled “The Duke (Of Supernature)” HERE.

1) I Live Behind the Clouds

7) The Duke (Of Supernature)