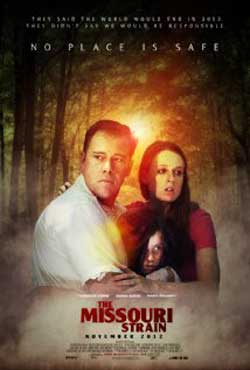 What with the recent success of World War Z (an intelligent, realistic zombie movie featuring Brad Pitt, with an estimated budget of $400,000,000), it is tricky for a short film like The Missouri Strain to pack much of a punch. The similarity between the story lines for both of these films works to the detriment of the latter. They are both about an impending zombie apocalypse due to some sort of biological outbreak. Both of the plots follow one (American!) family’s attempts to escape and fight this hideous situation, uniting together and facing a few difficult decisions.

However, due to the severe time constraints to The Missouri Strain (total running time, 22 minutes), it was hard for there to be much tension or emotion shown for the characters. The parents didn’t even have names, and were only known as ‘father’ and ‘mother’. This distance between the audience and the characters means that the severity of their situation is not fully reflected to the viewers. The music is pretty dull and unexciting, which only serves to draw more attention to the lack of innovation within the characters and plot lines. Ultimately, the main problem of The Missouri Strain is that it tells a story that we’ve all heard a hundred times before.

Unfortunately, director Wes Kotansky Jr. has declared that he is not planning to make any more films after the uphill challenges that he faced in his attempt to bring The Missouri Strain into fruition. Since early 2011, he tried to get funding for the film using a website asking people to donate what they can to help the film get made (the request was for a total of $2,500 – a fairly modest sum in comparison to World War Z!). The Missouri Strain had to be recast at one point, the entire film had to be shot in just 2 days and also, the writer and creator, Ryan McLaughlin, sadly passed away before the completion of the project. With all of these setbacks in mind, it is commendable that Wes Kotansky Jr. continued forward with the making of The Missouri Strain, and I certainly admire his efforts.

The Missouri Strain has gone on to win awards at multiple film festivals across America, hopefully proving to all involved that their hard work has paid off. Whilst I wasn’t fully convinced by the film’s techniques and thought that there was vast room for improvement, The Missouri Strain was shot very professionally and edited well which shows some real talent amongst the filmmakers who should take this experience to further enhance their potential movie careers. With a better plot and characters, this bunch of people can go on to do great things I reckon.