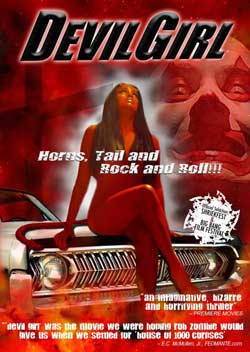 Fay is a small town girl on a cross country road trip, trying to escape her own reality after the death of her father. When her muscle car breaks down during a drag race she finds herself stranded along route 66 in an isolated desert town. Short on cash, she makes a series of choices to make enough money to repair her car. After encountering a neurotic, drug abusing clown she finds herself sliding down a dark spiral. Soon thereafter, her road trip starts to devolve into a living nightmare. Trapped and desperate, she fights to regain her identity while navigating through a host of locals; a creepy motel clerk, an overzealous preacher, and a sexy temptress with horns and a tail.

QUICK FIX:
In an attempt to deal with the death of her father, Fay leaves her little sister and her small town in the dust for a cross-country road trip in her souped-up muscle car, making gas money along the way by hustling pool and winning street races. Becoming stranded after a breakdown in a desert town in the middle of nowhere, she winds up in the local peeler joint trying to earn enough dough for car repairs and dealing with a host of quirky locals – everyone from a doped-up clown to a horned-up (figuratively speaking) sleazy motel clerk to a horned-up (literally) hot red chick with horns and a tail. Looks like I picked the wrong week to quit sniffing glue!

RAMBLINGS:
How many times throughout your life have you put a new movie in the player and within five minutes were pissed off enough to throw your super-deluxe nachos (with jalapenos) at the TV screen and play Frisbee with your DVD, thinking this was just another flick that you’ve already seen dozens of times before and done much better, and ask yourself why you’re wasting your time with it? I’ve lost count, personally. I almost fell for that trap this time, but I hung in there, and I’m so glad I did.

Once those 5 minutes were up and I let any air of pretension and exhaustion go, I realized that the intro fooled me, and that I wasn’t watching a badly done music video after all, but a very well done story about one person’s descent into a personal hell, losing her grip on reality, and her life unfolding into a living nightmare.

For this story to move forward convincingly, the main character had to be played by someone with depth in order to carry things along, and in lesser hands Fay could have very easily fallen flat. But thanks to the chops of Jessica Graham (my new crush), I got to know the character, feel for her, and genuinely care about where her journey ended up. I was unfamiliar with Ms. Graham previous to this, but you can bet your sweet ass I’m going to get my hands on the rest of her work now. Joe Wanjai Ross as the neurotic and constantly doped up The Clown comes across at first as Captain Spaulding Lite, but very quickly finds his own niche and manages to steal most of the show without ever taking me out of what was going on. Vanessa Kay as the title character reminded me of why I loved her so much as Lead Juggy on THE MAN SHOW, looking even more stunning in red makeup and horns. And much like Barf from SPACEBALLS, her tail definitely has a mind of its own!

Askins and Wilcox created a very impressive world of personal hell and inner demons come to life – here’s to hoping they collaborate more in the future. This was director Howie Askins first full-length feature from what I could find, and I was very impressed his overall style here…looking forward to seeing his next gig. Co-writer Tracy Wilcox has been a makeup specialist on many TV shows and movies, including other genre recommendations of mine such as LOVE OBJECT and BOO. The blood & gore factor was much lighter than I originally anticipated for a flick like this, but there was a great abundance of naked women on hand, so guys out there…rejoice!!

LAST WORDS:
DEVIL GIRL, while far from perfect and having (for me, anyway) a misleading and perhaps misguided intro, is still one hell of a fun little hallucinatory supernatural joyride of a road movie with a pounding soundtrack (where in the blue hell can I get a copy of that thing???) and enough twists and turns along the way to keep me entertained, and I truly enjoyed the hell out of it. The best way I can describe it to you is VANISHING POINT meets DEAD END. I certainly recommend it, so if that sounds right up your alley too then you should definitely check it out.