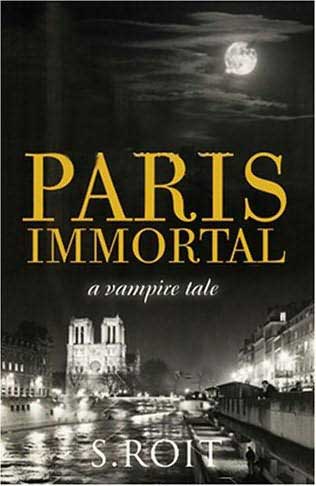 The Paris Immortal novels by S. Roit are something different in the overpopulated vampire fiction genre, and the fourth book, ‘Paris Immortal: Atonement’ is out soon. So what does this series and its author offer vampire fans that the others don’t? That is open to debate, but I would say that things such as character and sexuality are explored to a greater extent (and handled differently) in her books than those of some other authors. Plus, her blend of plot, character, horror and emotions are rather more subtle, making for a much more memorable read.

However, along with those aspects there is a genuine darkness to her fiction, a malice and a glint in its eye. The Paris Immortal series is continuing to grow and evolve, and so I asked how she would describe the series to a new reader of her work…

S. Roit: I’m terrible at summaries. Generally I first say: They are character driven stories in which some of the characters happen to be vampires. It’s different than some of the popular stuff out there, in that it tends to defy being pigeonholed into one genre. There’s some horror. Some romance. A little action. Suspense. It’s sexy and dark. It’s full of characters with fluid sexualities. If we get past that, I wait for questions!

You have a genuine love for a certain European city. Where does your fascination with Paris stem from? What is the attraction of the place?

S. Roit: I had long wanted to visit France, but was fond of saying that Paris was the last place I’d go, because hell, everyone goes to Paris and there are many other places in France worth visiting. Still, privately, I had to admit to myself that it always held a certain mystique, and was beautiful in film.

Once I did some real research on it…well, let’s just say the bitch snared me from thousands of miles away. I get it, now. I’m smitten from afar. I’m attracted to the history, the culture, the wine, the food, the people-and oooo, cheese. Of course, much of that is in all of the country, but Paris is just…well. It’s freaking Paris!

I was very interested to hear about your Paris Passionné release for the Kindle. What are your thoughts on the burgeoning ebook market?

S. Roit: To be honest I don’t think about it that much. I’m a person who yet loves paper, loves holding a real book; the scent of an old bookstores sends me into fits of ecstacy. It seems some people have been saying for a long while now that ebooks would kill print.

S. Roit: But so far, from blogs I’ve read on the subject by publishers and authors, and some I’ve spoken to, ebooks only account for 4-5% of the market at present. When I announced my Kindle project, many of my fans had absolutely no idea what a Kindle was.

So…I think it’s yet to be what it was predicted to be, though I think one day it’ll account for more sales than now, certainly. It does save space! It would be especially useful for college students. All those heavy textbooks reduced to one lightweight device? Think of all the savings on chiropractic bills!

Very true. There has been a lot of growth in ebooks recently, and it has now been revealed that ebooks are outselling hardbacks on Amazon (for every hundred hardbacks sold, there are currently 140 ebooks sold), so it will be interesting to see how things go. Any plans to get your books onto the Apple iBooks store?

S. Roit: Some of my series is already making its way to iPad, and we may look into Kindle for the series.

The urban fantasy genre has been very much in the public eye in recent years. Do you feel that the success of authors such as Charlaine Harris and Stephenie Meyer has been a help or a hindrance? I mean, while they may well have brought a great many new readers to a lot of authors, does the audience expect a certain kind of book?

S. Roit: First of all, while there may be a few of what some people term urban fantasy bits in my series, I’ve never considered it urban fantasy. I don’t think most of my readers do, either, nor does my publisher. It’s mostly said that I cross genres, which makes it a bitch to place in a category. I end up in horror/ghost stories, which is fine.

So… I don’t know that it’s had any impact on me personally, though there are vampires in both areas. However, in a broader sense, I think like anything, it has its pluses and minuses. I do have the sense that there is an expectation of what urban fantasy is (hence, of course, the label!) and that very popular books such as those you mention do set a definition in many people’s minds. They look for more like those.

On the other hand, there are those who are looking for something different. If they hated one of the popular books, they may never try another in that category, thinking that they’re all the same- and the thing is, many of them are, because they’ve been selling, and because again, we have those labels to fit. The label is the shorthand. I wish we didn’t need them, but bookstores and the like are all about placing them in sections…

Basically I think there’re pitfalls to ‘branding’, but it is what it is, just like the music business and its ever-changing categories. The attention is great most of the time; then again, people also get sick of being told what’s popular, what’s “in.”

Has this recent growth in the genre influenced your writing at all?

S. Roit: No, and I can’t imagine why it would or should. I don’t write according to

trends. I didn’t write in vamps because they were going to be popular (who really knew at the time anyway?); I wrote them because I’ve always, always loved them, and I will always write what I’m moved to write. Attempting to jump on a trend is the path of madness, if you ask me (One of them, anyway). For starters, you may not even be good at writing that trend.

What are the essential ingredients of a Paris Immortal novel?

cares what happens to them? Blurring/bending/erasing perceived lines, messing about with stereotypes. Honest emotion. Heart and soul. Darkness, whatever its forms. This is sometimes horror physical, sometimes emotional. Sensuality.

Horror as a genre has had its boundaries blurred in recent years, just like other genre fiction of late. Do you feel that this is essential to the genre’s survival, or is this diluting the genre beyond recognition?

S. Roit: Hell, you could ask this about any genre, or…well just about anything people are entertained by. People argue about this kind of crap too much, if you ask me-and you did.

S. Roit: I think that whatever helps keep it alive, is good. I think there’s plenty of room for every type of horror we like. I myself like different types, so why would I want my genre limited to someone else’s perception of what they think it should be? Diluting, my ass! The classics will always be there. There will always be people to write new stories. I say less whining, more searching for what you prefer, and/or, more writing what you prefer. You know, put up or shut up.

Granted, I may read something and say to myself “there’s too much sappy romance in this supposed horror novel,” but I’m not going to make a case out of it. I’ll just grab another book, one with less romance. Simple to do, as there are so many. No one is forcing anyone else to read weak horror (or whatever the complaint may be).

I think I drove that point home, eh?

I’d say so! In closing, what lies ahead for the fiction of S. Roit?

I have three works in progress at the moment, each very different, though all of them contain various amounts of horror. One of them is, I suppose, a more classic type of horror tale; more straight up. Another goes more inward for the horror; psychological, the character’s very personal horror.

And the other, I will now officially state for the first time, is another in the Paris Immortal series. I have no dates for when I’ll finish these. I’ve been on a bit of a break. I just hope to finish them, period.

Wow, thanks for the scoop!

With a growing fan base of dedicated readers, There is certainly the demand for more tales of terror, romance and strong characters from this particular author. The Paris Immortal series is available from all good booksellers, as well as the major online outlets. Amidst a deluge of vampire fiction that has clogged the shelves in recent years, a novel with the name S. Roit on its cover is one that will live on in the mind of the reader for a long time to come. If you are growing tired of endless Twilight ripoffs and the same old plot devices, then discover something new and vibrant in dark fiction- discover the characters and stories of Sherry Roit.

Andrew Hawnt is a pop culture blogger and widely read music journalist for Powerplay Rock and metal Magazine in the UK. He is also busy writing fiction that will hopefully give people nightmares. You can find more from him at www.andrewhawnt.com

Links for S. Roit for throughout the article: