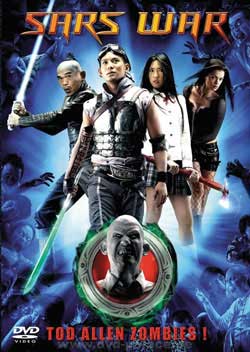 The fourth generation of the virus SARS is found in Africa! It’s more dangerous and causes the patients to transform into bloodthirsty zombies. The virus quickly lands to Thailand, Dr. Bryan Thompson who creates the anti-virus, ends up getting infected while doing his experiment and soon the virus is spreading to all the residents of his same building. At that time, Khun is trying to help a young girl who’s being kidnapped in the building… He ends up trapped in the building with only his precious sword as a weapon. Surrounded by the zombies, he has to find the girl and escape from the building before the government drops a bomb to destroy the virus and the building

” This is alligator shaking it’s tail!” ” And this is one ugly demonic ho!” These are just a couple of the stupid funny lines from the Thai made zombie gore slapstick bizarro cheeze fest called SARS WAR! Of course since I am a veteran gorehound and sleazmerchant I knew all about SARS WAR and had it on my Amazon wish list and was just about to order it when Mike, my horror movie pimpmaster, sent it to me to review for this site! Thank you pimpmaster!

From what I had read about SARS WAR it was a pretty outrageous, silly, bloodcaked, action packed low budget zombie feast that was so bad it teetered between wonderful and beautiful! But that is what I read. Ultimately I had to decide for myself and there are very few movies being released these days that hit the mark like so many horror movies from the 80’s that got a bulls eye while blindfolded. And I’m talking about flicks like STREET TRASH, BRAIN DEAD, BASKET CASE, RETURN OF THE LIVING DEAD PART 2, DAY OF THE DEAD, and most of all EVIL DEAD, EVIL DEAD 2: Dead By Dawn, and ARMY OF DARKNESS.

SARS WAR, great title by the way, is set in Thailand and the Sars #4 virus has swept across Africa and Thailand is the only Asian country that has not been infected by the disease. That is until a flying insect makes it’s way and bites a white guy named Mr. Biggs on the neck. While that is going on a teenage girl named Lai is being chauffeured around by her bodyguards and is ambushed by kidnappers. And it is this scene that sorta lets you know what kinda movie you are in for. One of the kidnappers is a hot young Thai girl in a pink bikini seductively distracting the driver and the other bodyguard so that the driver does not see the person dressed as a giant Teddy Bear walk in front of the car. The driver smacks the Teddy and sends him flying through the air landing on the pavement. The bodyguard says. ” Oh sh*t you hit a dog!” and the driver replies ” No it’s a bear!” One of them gets out to check on the bear and the bear kills the driver.

The other bodyguard gets out and starts shooting his guns John Woo style at the kidnapper who starts leaping and jumping around from tree to tree branch and this part looks like a old Nintendo super mario brothers game sequence! But it works for SARS WAR and made me laugh so now it’s up to Lai to save herself and she starts kicking ass but when she starts wrasslin’ bikini girl she tugs at bikini girls cheek and rips her face off! It was a mask and beneath it is one ugly Thai dude! Well, too ugly to be in a bikini. Not that any guy looks good in a bikin…except maybe…never mind.

Not quite meanwhile Mr. Biggs has gone to his apartment complex and begins to spread the diabolical Sars #4 virus to almost everyone in the tower block including a snake via cat that for some reason grows to enormous computer generated proportions!

If you read my MEAT GRINDER and P reviews, and I hope you did I really do, then you probably know as much about the Thai horror movie genre as I do. Other than these movie the only other Thai films I know are ONG BAK The Thai Warrior, and THE PROTECTOR. Both are Tony Jaa films and both are fantastic but that is all I knew until now. MEATGRINDER was really good and now that I have finally seen SARS WAR I am interested in seeing other Thai made horror films and what else SARS WAR director, Taweewat Wantha has done and what he will do in the future. Did he spew all of his wacky creative juices all over the screen with SARS WAR and is empty now? Or is SARS WAR just a stepping stone to many more outlandish gory slapstick horror comedies to come and what could he do with a bigger budget? And did all this madness come from him or was it a team effort with every one giving one hundred percent? I like this movie enough to wonder about all of this.

Because there is so much stuffed into SARS WAR and all my favorite genres are used and I’m betting Taweewat has a DVD and vhs collection very similar to my own. Here are just some of the movies SARS WAR reminds me of and must surely be influenced by: Of course EVIL DEAD 2:Dead By Dawn, DEMONS 2, BRAINDEAD, ZOMBIE3 & 4, THE CONVENT, BATTLEFIELD BASEBALL, ZEBRAMAN, MACHINE GIRL, TOKYO GORE POLICE, JUNK, VERSUS, BIO – ZOMBIE and other various films by Takashi Miike. And I haven’t even seen BIO – ZOMBIE yet! The only thing is that SARS WAR is not a complete gore fest and I am NOT complaining about this and it does try but I think the lack of even more gore is due to budgetary constraints. There is plenty of blood spraying, limb chopping, zombie babies ripping out through their mommas stomachs, cat eating, multi body chunks dismemberment and exploding heads but there isn’t much gratuitous consumption of flesh and gut munching but don’t get me wrong I am not complaining. But wait there’s more.

There are the stop virus bullets that the police use. When you shoot a zombie with a stop virus bullet it stops them in their tracks for a undetermined amount of time and their is the the green freeze sword that Master Thep uses that is just like a Jedis light sabre except it runs on batteries. Which Master Thep forgets to change. Oh yeah, and in my haste to tell you how awesome SARS WAR is I forgot to mention the hero Khun Krabi. He wields a sword and guns and uses a wok that he modifies into a chest plate and he can dance! And he saves the cute Thai damsel Lai!

I would like to see another movie with him as the hero too. Another thing I liked was the opening credits. During which we are treated to a animated segment of Master Thep dispatching zombies and throughout the movie there are times when it switches to animation for a bit. I know they probably took this from KILL BILL but again, this works for SARS WAR and makes it that much more fun.
I love a good, intelligent, well made horror film with good actors and even better gore effects but SARS WAR is a rare breed of movie and may be even rarer than you or I realize.

There are movies that are so bad they are good but usually these are made by accident and the film makers were trying to make a good movie but through their ineptness and high falootin’ ideals ended up cooking up a turkey with all the trimmings. And then there are film makers who are consciously trying to make a movie that straddles the line between bad taste and good movie making while poking fun at itself and giving a wink to us the audience. These types usually fail at what they are trying to achieve. SARS WAR does not fail it succeeds, in fact it exceeds on almost all points. By the way their is a third kind of bad film where you can’t tell if it was done on accident or on purpose. Two of these films are SAMURAI COP and KICKBOXER FROM HELL. You gotta check these out!

I’ve already seen SARS WAR twice and will see it again and not only am I giving it a glowing review for HorrorNews.net I will tell my friends that like these kinds of absurd movies about it and anyone else that will listen.

Lastly thanks to Mike for sending me this great movie. Ya know there is noise in the horror underground about the new wave of French horror and yes there have been some good flicks coming out of France but fans should keep an eye aimed at Thailand because they are releasing some good action , horror, and horror/comedies as well. They deserve some praise too.