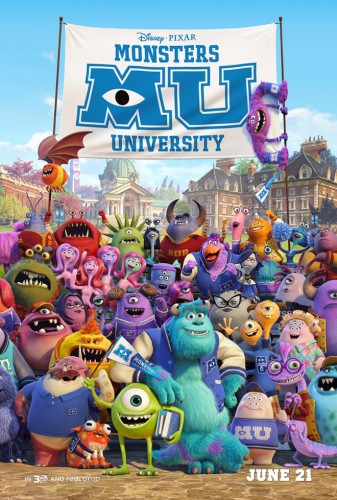 Mike Wasowski dreaming of being a “Scarer” since childhood enrolls in Monsters University. Once there, he meets his rival in James P. Sullivan, a fellow “Scarer” student who is far more imposing and carries a legacy of being a “Sullivan,” a famous family of “Scarers.” The two match wits, brawn and roars against each other resulting in their being tossed out of the scare student program. Now they must team up and train a motley crew of fellow students to win the annual Scare Games in order to be re-admitted back into the Scare classes.

With Monsters University, Pixar, Mike and Sulley decide to send up Revenge of the Nerds animation-style presenting how the two met in college and became a Scare team. The prequel to the 2001 hit has the lead characters meeting for the first time as they begin their freshman year in Monsters University where they both have enrolled in the “Scarer” program. Billy Crystal and John Goodman return in the key roles and provide Mike and Sulley with familiar and warmly entertaining characterizations. While the film struggles to reach the kinetic energy and pacing of Monsters, Inc., Monsters University does manage to eek out a fun, lively and refreshing look at the lives of its leads. 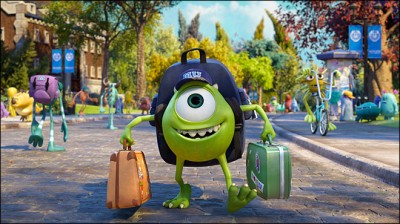 The first act sets up Monsters University perfectly, establishing Mike (Billy Crystal) Wazaowki’s love for the “Scare” industry and his determination to becoming a legendary “Scarer.” On a school trip to Monsters, Inc., he witnesses first hand how and where “Scarers” do their scaring and is immediately hooked. He enrolls in Monster University to take part of the “Scarer” program. The second act is all about Mike and Sulley, who get kicked out of the program during mid-terms, and their efforts to get re-instated into the program. There seems to be only one way to do so: enter, and win, the annual Scare Games. If they can win, they are back in; if they lose, they have to leave campus. But to win, it must be as a whole team, not as individuals. Mike and Sulley enter the Oozma Kappa fraternity (OK) and must guide the odd group of misfits into becoming top Scarers – the best, better than the opposing fraternity, ROR. Enter: Don Carlton (Joel Murray), Scott “Squishy” Squibbles (Peter Sohn), Art (Charlie Day) and Terri/Terry Perry (Sean Hayes and Dave Foley). The third act centers arount Mike and Sulley dealing with the aftermath of the Scare Games showing Dean Hardscrabble (Hellen Mirren) a new trick or two as they finally team up to work together instead of constantly butting head as they have throughout the film thus far. 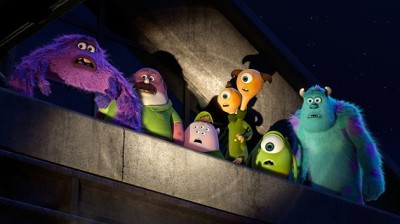 While the film is technically Mike Wazowski’s coming of age story, it is as much the formation and maturing of the relationship between the green, round unimposing scarer-wannabe and his big blue furry friend, James P. Sullivan. The film soars when it concentrates on the budding and strained early friendship. When they first meet as Mike helps Sulley re-capture Archie, the mascot of rival college, Fear Tech, the friendship appears to take an instant, natural bond of big tough guy and little smart fellow; but, when Sulley gets rewarded for Mike’s efforts, the friendship takes a quick dive. The strained relationship allows for a few laughs but also drowns the story in less than appealing child’s entertainment as they bicker and become enemies. Thankfully, their rivalry is short-lived as they end up in the same corner when they both get kicked out of the Scare classes. Even when their friendship is strained, it is their relationship that fuels the fun in Monsters University. It gives weight to Sulley’s confession late in the second act and provides the third act with its core emotional bond. Crystal and Goodman are just a perfect for these two characters now as they were when Monsters, Inc. debuted over a decade ago. 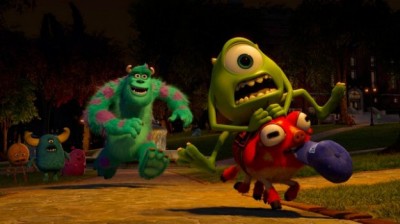 But there seems to be something missing in Monsters University that keeps the prequel from being as energetic and entertaining as the first blockbuster film. For one, the first film was entirely original while this film plays on very familiar themes and plot devices for the entirety of its second act. It literally plays out like a variation on Revenge of the Nerds or similar college themed comedies where the misfits must outwit and outlast the jocks. In Revenge of the Nerds, the Tri-Lambs must defeat the Alpha Betas in the Greek Games; here, the Oozma Kappas must defeat the Roar Omega Roar house at the Scare Games. For adults its is familiar ground; for children, however, it will likely come across incredibly exciting and fresh. To its credit, the script manages to keep things fun and interesting as it navigates its way to the more refreshing third act. 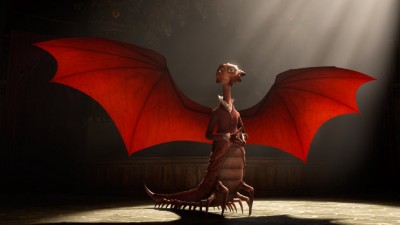 The film also suffers from the lack of a significant villain. Neither Johnny Worthington (Nathan Fillion) nor Randall Boggs (Steve Buscemi) from the ROR house step up to take that role which leaves the most menacing character in the shape of Dean Hardscrabble (Helen Mirren). While the multi-legged, bat-winged head mistress of Monsters University is intimidating in appearance, hiding mostly in shadow and standing tall over most all around her, she never oversteps the bounds of a well-intentioned Dead of a highly respected college. While her actions never favor Mike or Sulley, they are never malicious. She is no Dean Wormer from Animal House, for example. Here again, the perception from adult to child will differ. To parents, she may not be even wrong in her actions; while, to children, she’s the voice that keeps the cast from achieving their desires. In an odd way, she’s “the man” keeping our heroes from being “Scarers” by denying them entry into the Scare program. She’s far different, and far more innocent, than the corrupt Henry J. Waternoose III from Monsters, Inc. And, Randall hasn’t become the villainous Randall from that film yet either. This results in a lack of tension in the film that prevents it from being as classic as the superior Monsters, Inc. 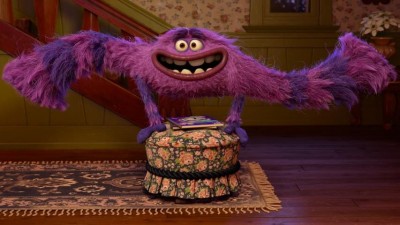 Monsters University ultimately wins with its concentration on building the characters of Mike and Sulley and establishing their friendship. When it comes time for them to work together to escape being trapped in the human world, the film rises to heights that begin to challenge the original. With Mike leading Sulley in tactics to scare the police in the cabins, the finale deals with rewarding its themes of individuality combined with teamwork. And it rewards its audience with a thrilling conclusion. Neither can escape without the other and their eternal bond is forged. Mike is intelligent, quick-thinking and encouraging, building Sulley’s confidence. The film also contains some welcomed cameo voices and familiar animated faces, such as Bob Peterson as Roz and John Ratzenberger returning as the Abominable Snowman – here a mailroom employee. Monster University is a entertaining romp, the perfect companion to Monsters, Inc. Not quite as original as the first film, but equally warm in heart and character easily trumping over the more derivative plot elements of the script.