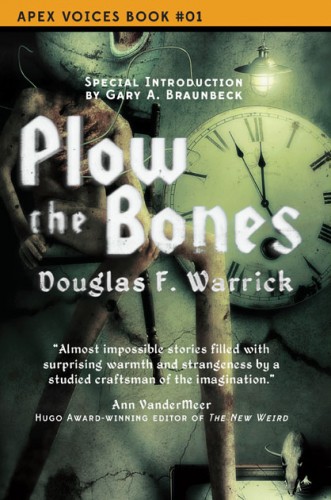 A common complaint in the genre is that Weird Fiction is no longer weird. That Speculative Fiction no longer speculates. Instead of the bright, dimensional boundary shattering work that started the genres, we’re getting stale, staid and bland rehashes that stick to the established formulas. Nearly every fantasy is a copy of either Tolkein or Howard. Far too much Sci-fi is trying to be Herbert, Asimov or Heinlein. And if I get one more f*cking lazy goddamn Lovecraft pastiche, I swear that I may stab someone. But then comes Dougie Fresh here with some of the weirdest speculative fiction I’ve read in years.

Now, if you like your fiction easy, simple and fun, then I will just tell you to stop now. You won’t like this stuff. His stories are dense and, at times, intensely painful. This is not good time reading. At the same time, it is damn good.

If you’ve read either of Apex’s Dark Faith anthologies (shame on you if you haven’t), then You’ll recognize his name among the standouts there. “Zen and the Art of Gordon Dratch’s Damnation” (from the first one) presents a bhuddist lesson to a Christian god that manages to avoid didacticism and leaves pretty much everyone feeling cold. “I Inhale the City, the City Exhales Me” (courtesy of Invocations) follows an artist become a god or sorts, who is left weeping over the creations she has poured from her pen and her own petty, empty desires. Both stories are dense, intricate mazes of human misery and hope laid out in bizarre, but not incomprehensible, landscapes that positively wrecked me.

Two of the stories hit a bit too close to home for me. The first was “Come to My Arms, My Beamish Boy”, a tale of an old man, losing everything he was and the few tenuous connections to his own life that remain his to interdimensional lampreys. The portrayal of Alzheimer’s from the inside is touching and was possible a bad choice for me to read so shortly after losing a family member to dementia. All the same, the touch of potential hope at the end was needed, and I thank him for that.

The other was “Rattenkonig” about the hidden room in the house with a wall of interwoven rat-type things and the strange guy that shows up asking about them. Or, it’s about the slow, steady, unnoticed dissolution of a relationship until those left feel no connection but can see no way out. He perfectly captured the feelings of alienation and confusion as well as the fear that nothing will get any better for either of you, no matter what you do.

Overall, there seems to be a general theme of disappointment running through these stories. An exploration of a life and a world that does not meet the hopes we were given for it. Don’t look for answers, though. None are given and we (both readers and characters) are left fumbling and tumbling through things we have no hope of comprehending. I told you it wasn’t going to be fun.

As I said, if you are looking for breezy entertainment, you won’t find it here. But fans of Thomas Liggotti and Gary Braunbeck as well as people that want a bit more honest weirdness in their Weird, without the nonsense of Bizarro, may not be happy, but they will consider the experience a worthy one.

buy it directly from Apex here.