Aurelio Voltaire is directing a film version of his comic book “Oh My Goth!”: An irreverent, comedic trip through horror & science fiction. Details regarding Voltaire and the film below: 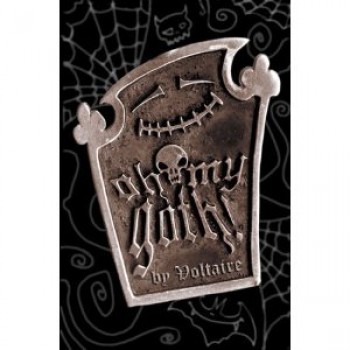 On behalf of musician and filmmaker Aurelio Voltaire, we’re excited to announce his upcoming full length film as director: An adaptation of his comic book “OH MY GOTH!” featuring his musical talents!
When the reanimated skeletons of Necronus, a cemetery planet across the dark expanse of space, decide they need Earth paved into a landing strip they send the worst of their agents to undertake the task. Arrogant, pompous and not the brightest laser in the arsenal, Heironymous Poshe, takes on human form and travels to Earth aboard his Black Spire, a spaceship that can easily pass for a giant, black cathedral. However, Poshe has plans of his own, namely to avoid a desk job on the necrid home world and live a life of leisure in a fixed orbit above Earth. For centuries, Poshe (along with his robot slave and an imprisoned midget) has avoided his prime directive. Instead he has spent his time abducting Earth women, celebrities and bands for a non stop nightly party above the Black Spire. But Poshe’s days of care-free, hot babe abduction are coming to an end. Tired of Poshe’s lack of results, Lord Krom-Wrath, a supreme ruler of the necrus, launches a full scale invasion of Earth. Poshe bands with the only people on Earth who understand his cause (A group of Goth kids, a cadre of ninja priests and a small order of Hasidic Rabbi’s – Ironically people who all wear black) to repel the oncoming armada of Necrid ships. The final space battle is the “Jews in Space” Mel Brooks promised us and never delivered!

After performing worldwide onstage, directing commercially and following the film festival circuit with his stop-motion animated films, Voltaire will now direct a feature film based on his own comic work. The feature version of OH MY GOTH! will have that same strange brand of dark comedy and music that he has been performing at Goth clubs and Sci-Fi/Horror conventions across the land. 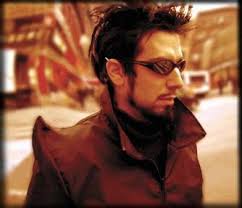 “It was time to finally unite my storytelling, my music, my twisted humor and filmmaking sensibilities all into one project.” says Voltaire. “It has all of the things that I love: Monsters, rock and roll, comedy and sex mashed into a giant ball of awesome!” Producer Keryn Thompson is very excited about the content. “There’s loud music! There’s scantily clad girls! There’s Satan!” she says.

Co-producer James Morgart says that he joined the project because “Voltaire’s material stretches across so many genres that he sort of encompasses every bastardized sub-genre to be associated with the Gothic tradition since Walpole’s Castle of Otranto. His plans for this film are to give his fans all of their favorite aspects of his work: music, animation & subversively witty humor”.

“OH MY GOTH!” the film is currently in pre-production and will shoot in the New York City metro area.
Genre: Horror/Musical

Screenplay by Aurelio Voltaire based on his comic book OH MY GOTH!

Aurelio Voltaire is a media personality and respected authority on all things Gothic, Horror, Sci-Fi, Steampunk and “Geek” culture. He is often referred to as a modern day renaissance man having achieved success in the fields of animation, music, comics, books and toys.
Voltaire’s career began in the 1980’s as a stop-motion animator and director, creating some of the award winning, classic MTV and SYFY channel station ID’s. He’s worked in television, animating and directing commercials for nearly twenty years when he realized it was time for him to tell his own stories. Finding comic books to be a vastly more economic tool than feature films, Voltaire told his first epic tale Chi-Chian in comic book form. This dark Cinderella story set in Manhattan’s future was published and led to a 14 episode animated web series directed by Voltaire and featured on the SYFY channel’s website. His success in comic books also led to several underground hits including the comic book series OH MY GOTH!, HUMANS’S SUCK! and most recently DEADY. The latter featured collaborations with some of the biggest names in horror and comics including Neil Gaiman, Clive Barker, James O’Barr, Roman Dirge, Gris Grimly and many others. It also spawned a long list of toys including plush toys for Six Flags, Hot Wheels toys for the Japanese market and over a dozen vinyl toy releases including collaborations with Disney and Skelanimals. In yet another career swerve, 1995 saw Voltaire take the stage at a New York City club where he launched his music career. His songs are a strange brew of murder ballads, tongue-in-cheek exercises in the macabre with just enough bawdy Star Trek and Star Wars songs to keep convention audiences rolling in the aisles! Many in the mainstream know Voltaire as the writer and performer of the songs “BRAINS” and “LAND OF THE DEAD” from the Cartoon Network show, The Grim Adventures of Billy and Mandy. Almost constantly on tour, he’s played his music around the world and has released eleven full length CD’s to date. 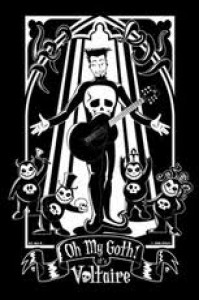 Voltaire also wrote the popular books What Is Goth? and Paint It Black: A Guide To Gothic Homemaking (Weiser Books) and has appeared on numerous television shows and documentaries as an authority on Goth, Horror and Steampunk. Appearances include Fox News, Biography, MTV News, Fearnet, IFC, PBS and others. When not touring, writing books or designing toys, Voltaire teaches stop-motion animation at the School Of Visual Arts and continues to make short films. His “Chimerascope” series of stop-motion shorts are perennial film festival favorites. The five films have won a combined 31 awards and feature the voice talents of Deborah Harry, Richard Butler, Gerard Way, Gary Numan & Danny Elfman.

More on Aurelio Voltaire can be found at www.voltaire.net