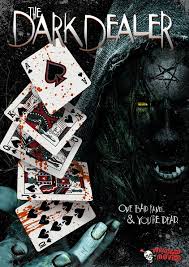 A demonic card-dealer allows three dead men to play a hand of blackjack for possession of their souls.

This cheap and dated looking anthology horror movie has a decent amount of ramshackle charm and is well worth a look for retro horror buffs.

The wrap-around story, which is later developed into the third tale in its own right, concerns Ray (Richard Hull Jr) a young man being pursued around an empty office complex by a strange floating multi-coloured ball of energy which seems intent on destroying him. Dashing through a door to escape the orb, Ray finds himself in a dingy room with three men sat round a table playing cards. The dealer (Mark Fickert) explains that Ray and the other two men are dead and that they will be playing blackjack for their souls. 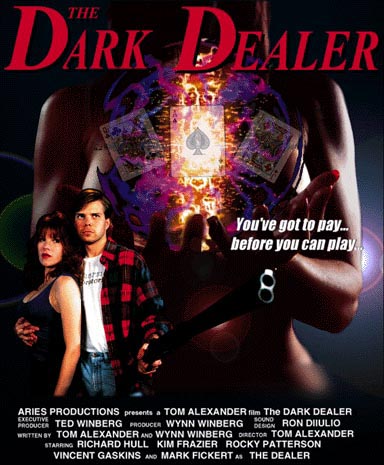 First to play is Pete (Rocky Patterson). As his hand is dealt, flashbacks show us how he got into this predicament. We learn that Pete is, or rather was, a small-time hood on the run from the law with his partner Fred (Charles Carroll) after killing a man who owed him money. Pete and Fred hide out by breaking into a grotty basement apartment occupied only by a strange little old man who introduces himself as Nickodemus (Gordon Fox). Helping themselves to the old man’s dinner, Pete and Fred slowly begin to realise that there is more to their host than first appears…

Second to play is the long-dead Samson Burke (Vincent Gaskins) who opts to split his hand. The dealer says he’ll require another soul for Burke to do that, to which the corpse replies, “You’ll get it.” It transpires that Burke died in 1961 – an ignominious exit in a motel room with only a hooker and a bottle of whiskey as witnesses, for Burke was a blues musician who was so overcome with alcoholism that he was reduced to playing bars for tips and free beer. What no-one seemed to know is that he was also a gifted songwriter who never got further than recording a few of his compositions on a reel to reel tape. Thirty years later that tape surfaces in a garage sale and is snapped up by hot shot entertainment lawyer Phillip Barton (Kevin Walker), an ambitious but frustrated songwriter in his spare time, who risks the wrath of the dead by trying to pass off Burke’s songs as his own…

The third and final tale concerns Ray, whom we met at the start of the film. As his hand is dealt we learn that he and his girlfriend Denise (Kim Frazier) have broken into the offices of a pharmaceutical research company in order to steal a new chemical for a drug dealer Cracker (Jeff English) to whom Denise is deep in debt. Cracker, who has accompanied the pair on their trip, samples the new chemical and is immediately transformed in a glowing ball of energy that begins to chase Ray and Denise through the office complex. And that, neatly enough, is where the film began, so I suppose you might say that it is a wrap-around story in the truest sense of the phrase. 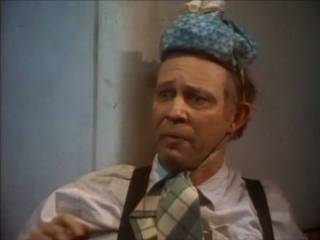 I believe that THE DARK DEALER began life as two separate shorter projects which were then merged into one film with the third book-ending tale added at a later date. There’s nothing wrong with that approach and in fact the anthology horror movie is actually a great vehicle for showcasing two very different but enjoyable stories. The wrap-around story is great fun too, and reminded me of those great British anthology horrors of the ‘60s and ‘70s, particularly DR TERROR’S HOUSE OF HORRORS. The third tale is the weakest but two out of three ain’t bad, as they say, and despite the scuzzy photography and cheapo special effects this entertaining little horror collection is worth looking out for.