Last week celebrated the American DVD/Blu-ray release of Ji-woon Kim’s The Good, the Bad, the Weird. The film is more or less a remake of Sergio Leone’s spaghetti western of a similar name involving three mercenaries in hot pursuit of buried treasure and get caught in the midst of a civil war. Here, it’s 1930s Manchuria and the Imperial Japanese army is battling the Qing Dynasty over territory dominance. It has the same “this land is our land” sentiment that almost all American westerns do, but that’s where similarities end. Kim doesn’t flaunt any of his characters as “badass” nor does he attempt to seriously tackle violence as a subject, which sets it far apart from our grungy interpretation of the genre. 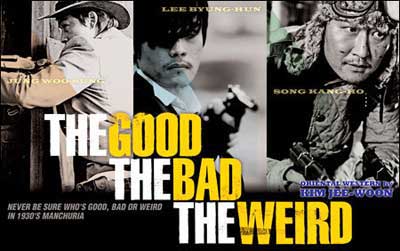 You don’t see too many “Asian Westerns.” After all, most spaghetti westerns have their roots in the early samurai films, such as the sublimely entertaining Seven Samurai. The film is one of the most celebrated adventure epics of all time, being remade twice in the US with The Magnificent Seven and, most notably, the Roger Corman produced Battle Beyond the Stars. The tradition continues with Kurasawa’s next two masterpieces, Yojimbo (translation: “bodyguard”) and Sanjuro (translation: “thirty-ish male”), which inspired the “man with no name” trilogy (starring Clint Eastwood as the “thirty-ish male”). This, was followed by Django, which shared the similar storyline of “sole warrior manipulating two rival gangs,” and once again thirty years later with Takashi Miike’s Sukiyaki Western Django. 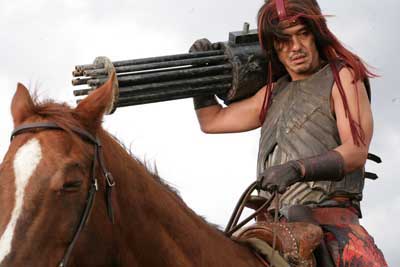 Kurasawa actually cited a few American westerns as inspiration for some of his work, or in this case, the Yojimbo dualogy. He claimed to have lifted from an American detective novel called The Glass Key (adapted as a film in 1935 and remade seven years later) and his studies of western cinema and technique helped him to create and capture his own period locale. Yojimbo, unlike its American counterpart, plays more like a noir piece with dark morality issues and a tone lifted from its printed counterpart. The “hero” of the film, while under spoken and quite intelligent, is a venomous sociopath who kills for sport. He hacks off limbs without so much as batting an eyelash, provides sardonic commentary overlooking a brutal massacre, and tears apart someone’s house in less than five minutes with what looks like the effort of “ten to fifteen men.” There’s contempt, and then there’s total psychotic hatred, which is slightly below what his fiery temper is capable. Kurasawa decided to tone it down a bit for the sequel, Sanjuro, which utilized a broader sense of humor.

Unlike heroes from the old west, samurai actually had a duty to protect the people from outlaws and rival clans, a duty much more serious than mere obligation. They had a specific code of ethics called “bushido” and upon violation they were forced to commit hari-kari; the ultimate method of preventing corruption. However, like in most American films, these vigilantes were solitary anarchists never working for a higher power except the good of all humanity, riddled with battle scars from a mysterious past, opposed materialism and almost never wanted to resort to violence. Although they sure did a pretty bad job avoiding it. 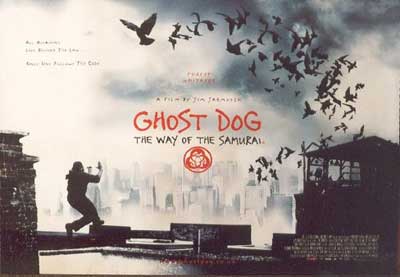 Slowly, the samurai genre migrated to the US market with films like Ghost Dog , wherein they don’t take place in the Tokugawa period (or even Japan for that matter) and the ronin are more like the hardboiled, grizzled vigilantes from older films like Death Wish, only instead of guns they used swords. Quentin Tarantino wrote and directed the Kill Bill films around the same time, expressing his love for spaghetti westerns and samurai films (doing so once again in the recent Inglorious Basterds). Meanwhile, Asian cinema has seen some particularly over-the-top explorations of the wild west, with the previously mentioned Sukiyaki Western Django.

Anyway, back to The Good, the Bad, the Weird. As a matter of fact, Good/Bad/Ugly happens to be my all-time favorite movie, so I was curious to see what they had to hit me with. Ji-woon Kim’s previous efforts included A Tale of Two Sisters, stars the guy who played the boss from Sympathy for Mr. Vengeance and the dad from The Host (Kang-ho Song), two films I absolutely adore. He plays “The Weird,” a buffoonish thief who gets caught up in a scandal way out of his league with “The Bad,” played by the guy who was the director in the “Cut” segment of Three… Extremes (Byung-hun Lee). Then Woo-sung Jung plays “The Good,” who closely resembles Eastwood’s character from the original. All three are after a lot of buried treasure with “The Weird” being the only one who knows the location, and as always, they have themselves a little stand-off at the very end.

My favorite character has to be “The Weird,” the proverbial snake-in-the-grass of the trio. Kang-ho knows what kind of movie he’s in and just goes for it, and it pays off. He’s paired up with Woo-sung (who does a great straight man, by the way) for the majority of the film against “The Bad,” an egotisic madman who’s out to kill… pretty much everyone, I guess. All three have terrific character moments that shine through especially come the final confrontation. Overall, I watched this with a goofy smile plastered on my face through and through. I couldn’t recommend this film enough.

Honestly, I really hope we get more of these “Asian Westerns.” We have two filmmakers who brought us some very innovative action films, and there are certainly enough talented directors to keep it going. I’d love to see something from Chan-wook Park (Oldboy) or Joon-ho Bong (The Host). We’ve had our own impressive westerns like No Country for Old Men, maybe an Asian version would be fun.

That last part was a joke.