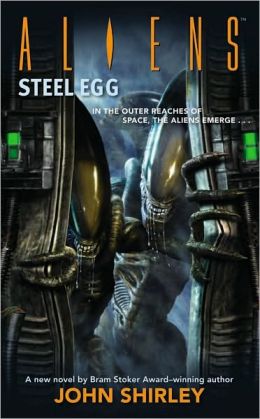 I have read some movie-tie-in novels and adaptations of such movies they are based on. When I found out about a series of Aliens novels published by Dark-Horse, my first reaction was: Finally! They are publishing more Aliens stories. There is one writer whom I’m familiar with who specializes in horror fiction, John Shirley, I discovered that he wrote an Aliens story, I had to think…wait, is he that guy who wrote Demons?

I was pleased and excited to find out that it was him. I had to buy Aliens: Steel Egg and read that one, I did and read the Author’s Note that he wanted to do a sort of prequel on how humanity first met the Aliens. I have seen Prometheus and how Ridley Scott wanted to do something different, but if Ridley had read Aliens: Steel Egg, I think he should have preferred to hiring John Shirley for the writing of Prometheus, I know Ridley Scott had this unique vision, but John Shirley’s Aliens novel really struck home with me.

I have been an Aliens fan for a long time and have always wondered what would happen if humanity first ran into the Aliens? I mean before Ripley and her crew set down on LV-426 and investigated the alien vessel that carried the eggs, I always wondered where did they come from, who created them?

John Shirley did what Ridley Scott should have done, made it a mystery. When reading Aliens Steel Egg, I could see this as an actual Aliens movie. I could see the inside of the anomaly and the gruesome deaths made at the claws and inner jaws of the Aliens. I liked how the novel progressed and did what the first Alien movie did, introduce the characters and flow the story along as the crew met their grisly fates in Alien. The action is fast-paced and the horror is relentless. There is the strong sense of claustrophobia that is throughout the novel. I’ve discovered in horror novels that there are no happy endings and that no one gets out of danger scarred, I felt sympathy for the two main characters and what they went through. If anything, this would definitely make up for Ridley Scott’s Prometheus. It would fit into the Alien saga nicely since the writer has paid quite an homage to the original Alien film.

If you are an Aliens fan, seek this book out and read it with the lights on and be sure to check out the ventilation shaft while you’re at it. This is John Rizo, last surviving reader of John Shirley’s Aliens: Steel Egg signing off.