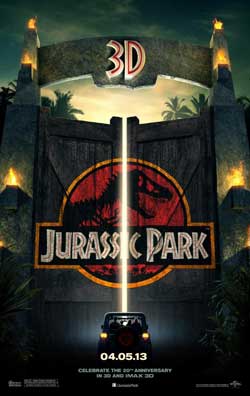 During a preview tour, a theme park suffers a major power breakdown that allows its cloned dinosaur exhibits to run amok.

I remember the excitement I felt when I bought tickets to see “JURASSIC PARK” for the first time in 1993. Back then it was THE movie to see, with effects like no film before it. Steven Spielberg (with the help of some cutting edge CGI) made the world believe that dinosaurs could exist in today’s world & audiences just ate it up. A massive box office success, it spawned 2 sequels and a third is due in 2014. And now it’s being re-released theatrically in 3D! But does it still hold up? Does the addition of 3D make it any better or is it just a case of Hollywood scraping the bottom of the barrel & attempting to mine what few dollars it can from an audience who has seen this movie countless times already? 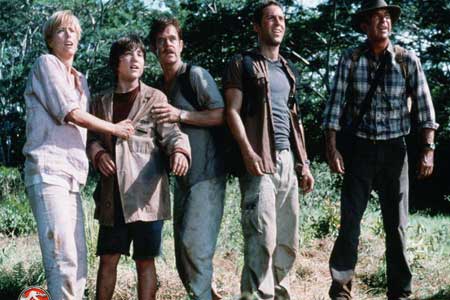 I suppose it’s possible for someone reading this to not be aware of “JURASSIC PARK” but I really doubt that. But it’s my job to tell you guys what it’s all about isn’t it? Billionaire John Hammond (Sir Richard Attenborough) & his team of scientists have figured out how to clone dinosaurs by mining the blood of prehistoric mosquitos that have been frozen in amber for thousands of years. His plan is to open the world’s most exclusive theme park. One with live dinosaurs as the main attraction. He has enlisted the help of paleontologists Alan Grant (Sam Neill), Elle Satler (Laura Dern) & chaos theory expert Dr. Ian Malcolm (Jeff Goldblum) to give their seal of approval to the park before opening it to the general public. 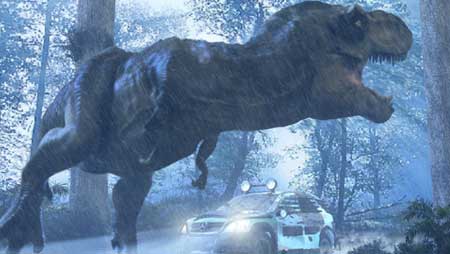 He also has his two grandchildren on the island (Isla Nublar) where the park is located so that they can experience it all first hand. But unbeknownst to him one of his technicians has plans to steal individual dinosaur embryos & sell them to one of Hammond’s rivals. Dennis Nedry (Wayne Knight) has placed a password into the programming of all the park’s functions in order to essentially shut it down so that he can grab the embryos & escape the island on a boat that’s waiting for him. Unfortunately by shutting down all of the park’s security systems he’s allowed the dinos to run free. And they’re hungry…

“JURASSIC PARK” is a landmark film for more than a few reasons. Firstly it’s a truly exciting film that really puts audiences at the edge of their seats. Based on the novel by the late Michael Crichton (Who also wrote the script) it’s a nerve wracking thriller of the first order. The acting is top notch with Goldblum’s Dr. Malcolm stealing the show with his constant comments on how bad an idea the whole idea of a theme park filled with actual dinosaurs really is. Spielberg’s direction is smooth & assured and I daresay he was at the height of directorial prowess here. But the main focus of the film was the dinosaurs of course! Could these new fangled CGI effects reallyconvince modern day audiences that dinosaurs could still exist? The enduring popularity of the film proves that the answer to that question is a resounding “YES”. By far the most convincing display of dinosaurs on film ever attempted, “JURASSIC PARK” featured dinosaurs of all types interacting with the actors on every possible level through a combination of puppetry, full size animatronic creations & of course, amazing computer generated imagery that put the creatures in the forefront without worry of audiences calling them “Fake”. They were that convincing. 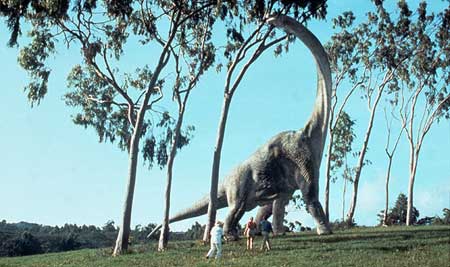 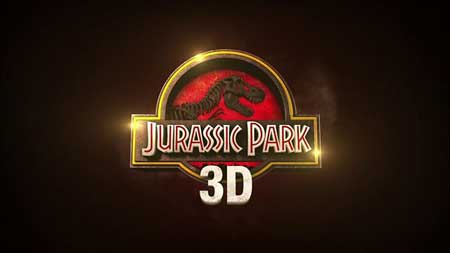 But here we are in 2013 and the film is getting re-released with a shiny new coat of 3D on it. Does the film hold up after all of these years? I’m happy to say “Yes”. It still made members of the audience I saw it with jump up & shriek with fear & delight throughout it’s running time. This really surprised me as I was sure that everyone has seen the film at least once in their lifetime & wasn’t going to be surprised by anything they saw onscreen. But I was wrong, the audience still ate it up as if it was their first time with it. And the 3D? Well…IT WAS AWESOME! I’m not a fan of 3D conversion and I don’t think that films that weren’t meant to be shown in 3D should go through the process just to make a few more dollars but I must admit “JURASSIC PARK 3D” really kicked ass! I don’t know how much Spielberg had to do with the conversion but I doubt that if it couldn’t be perfect he would’ve allowed it to go forward. It’s a brand new film with the 3D effects added onto it. The framing of scenes with palnts in the foreground & actors/dinosaurs in the background was truly stunning. The dinosaur stampede scene featured the creatures coming straight out of the screen right at the audience & the scene in which the T-Rex is chasing the jeep from behind (Which is the basis of the thrill ride at Universal Studios) is one of the best examples of 3D on the big screen I’ve ever seen. 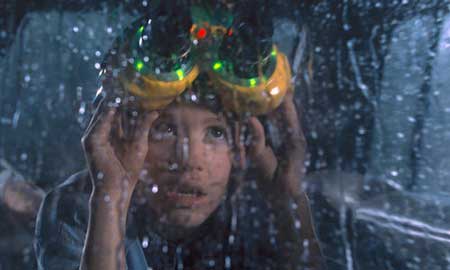 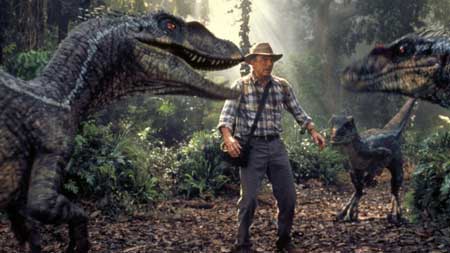 Now to be fair I saw the film on a IMAX screen which only multiplied the sense of the creatures coming out of the screen and into my lap. If you have a chance to see it in the IMAX format you would be doing yourself a disservice if you didn’t, it’s really amazing. It’s still a great film and although it might be an instance of quadruple dipping, what with it’s availability on all home formats & such, but it’s one of the few times that I can think of in which it’s actually worth the money to see a movie in a theater again. You remember the feeling you got when you saw it for the first time? You’re gonna have that same feeling all over again acolytes…it’s really that good!