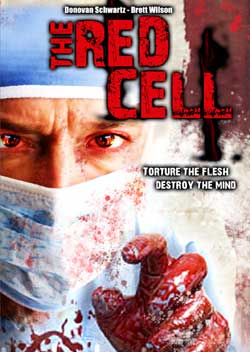 A terminally ill patient, wakes up in a dark, decrepit underground chamber. An IV pumps an unknown liquid into his body and adorning his head is a crown of wires. His last memories lead him back to the hospital where doctors had recently discovered his illness. He didn’t even have enough time to inform those closest to him of his untimely death sentence before ending up here. Behind the walls someone is lurking, and Ayden soon finds out that a psychotic killer, bent on performing strange, immoral medical experiments, is holding him captive. But there’s more to this man than meets the eye, as Ayden will learn in time. What starts out as a sadistic medical experiment quickly becomes an excruciating race for Ayden to survive both his captor and his illness long enough to simply tell his shrouded family goodbye

The Red Cell is a 2008 D.I.Y. horror film written and directed by Chris Schwartz (see also his 2006 one-man show Crawlspace) that attempts to play off one of man’s darkest fears: what would you do if the movie you rented was shot so dark you often couldn’t see what was going on? Schwartz’s answer to that question is to give us eighty-seven minutes of scenes that we recognize from other films strung together with a story that could almost hold our attention if not for the poor acting. 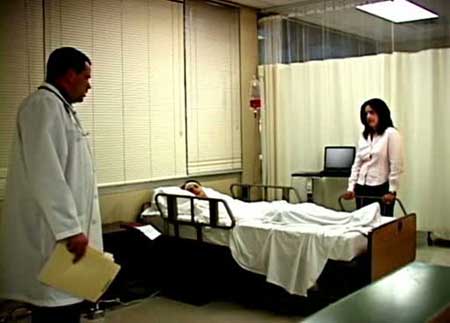 Ayden (Donovan Schwartz, opting to give us his best Keanu Reeves impression) wakes up on a gurney in a dark room attached to machines and IVs (see 28 Days Later, even down to the soundtrack). The walls are covered in bloody handprints, and an eye is peering in at the confused man through a hole in the wall. Ayden stumbles around the room looking for a way out, eventually stepping on an unidentified bloody, um, thing (?) on the floor. He collapses, and the director takes advantage of his unconscious state to give us the first of many flashbacks in which a faceless doctor reads his lines to Ayden, slowly piecing the story together. 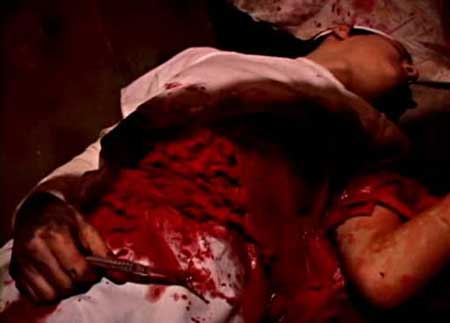 What happens next happens multiple times throughout the remainder of the movie: Ayden wakes up, stumbles around his room, a guy in a gas mask (think My Bloody Valentine meets the weird underground attacker in House of 1000 Corpses) comes up behind him and injects him with something, and Ayden collapses again, bringing us to another flashback. We discover, through these flashbacks, that Ayden has a brain tumor and is dying. Sometimes when he wakes up, he sees another man in the room, a ghost perhaps. Sometimes he has conversations with the man behind the wall, whom he decides must be the doctor from the hospital. Eventually he finds a diary that might be from a previous prisoner which details horrible experiments going on, as well as a map to get out, only it disappears every time he puts it down. 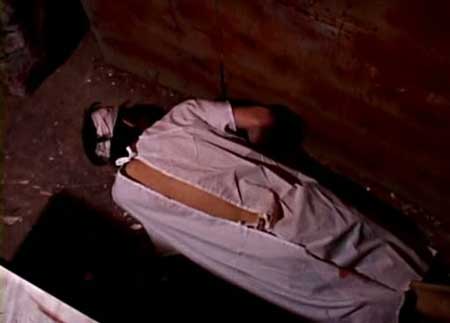 The main problem with this movie is that it feels like a repetitive plot with bunch of ideas from other movies put together to create the substance. I can brush aside the immediate Saw feel, as it’s not fair to say that every movie set in a single room is a Saw copy-cat. But when a box appears in his room, and as he reaches to touch it, it jumps (like Audition’s old bag-o’-dismembered-guy trick), then the camera focuses at an angle that shows us blood and hair on the box, I expected Ayden to go from Keanu to Brad Pitt and moan “What’s in the box?” And the ghost guy who keeps appearing (at one point even showing an eye injury) feels like an unmasked Frank the Bunny from Donnie Darko. Add all of this to a constant cycle of Ayden stumbling around, Ayden collapsing, Ayden reviving, ad nauseum, and we run into a wall between ourselves and enjoying the film that we just cannot climb. 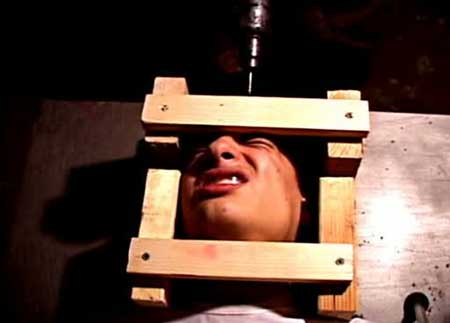 The other frustrating part of The Red Cell was that a lot of it was shot so dark that it’s near impossible to decipher what we are supposed to be seeing on the screen. At one point, the ghost man in the room points toward a dresser against the wall, then disappears. Ayden goes to the dresser, opens the drawers, and the music makes us feel like something shocking or surprising will be found. But it is so poorly lit, we can’t even see anything that is going on. It’s enough to bring the viewer out of the moment, and not many movies can get away with that even once, much less multiple times, and still be successful. 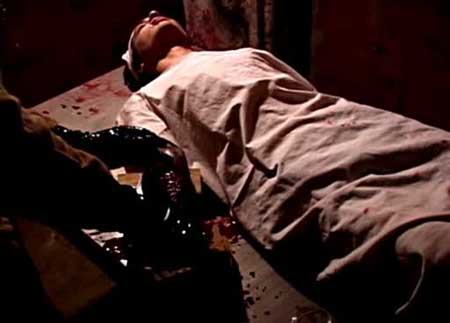 The Red Cell isn’t a total waste of time by any means, and the plot, while telegraphing its twist fairly early, isn’t horribly written. Some of the gore-effects are decent as well, especially a fairly nasty Cabin Fever-like blood vomit, and an infected arm that could make Harry Goldfarb (Requiem For A Dream) shudder. In fact, I commend the director for working within an obviously miniscule budget and limiting the action to happen within only a couple different sets. Schwartz is further proof that you don’t have to have the budget of a Hollywood blockbuster to get some good gore on the screen. Good enough for an early effort, but a lot of work needs to be done to make future releases more enjoyable.