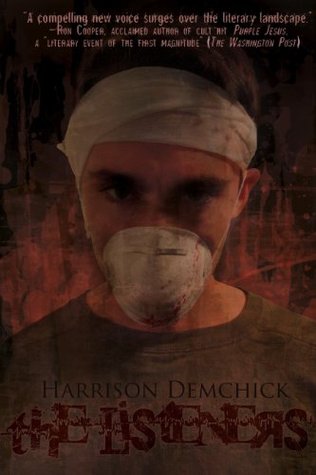 Before the plague, and the quarantine, fourteen-year-old Daniel Raymond had only heard of the Listeners. They were a gang, or at least that’s what his best friend Katie’s police officer father had said. They were criminals, thieves, monsters–deadly men clearly identifiable by the removal of their right ears. That’s what Daniel had heard. But he didn’t know. He didn’t know much in those early days. He didn’t know how the plague began, but then, no one did. The doctors and emergency medical personnel said it was airborne, and highly contagious. They said those infected became distorted both inside and out, and very, very dangerous. Then the helicopters came and took the doctors away, and no one said much of anything after that. Except the police officers. They said they’d provide food and order, in exchange for guns and, ultimately, anything else they felt like taking. Daniel’s mother went out for toilet paper. She never came back. He hasn’t heard from Katie since the phones went dead. And with his real family gone and surrogate family unreachable, Daniel, scared and alone, has nothing except the walls of his apartment, the window shattered, the poisonous air seeping in. That’s when the Listeners arrive. Derek, the one-eared man with the big, soulful eyes, promises protection, and hope, and the choice not to sit alone and wait to die in some horrific way. He offers a brotherhood under the watch of their leader, the prophet Adam. He offers a place in the world to come.

After talking with Mr. Demchick about the book and reading the above synopsis on Amazon, I was extremely excited to read The Listeners. The day it arrived, I quickly set aside the book I had been reading so I could focus on this one and I’m very glad that I did.

The Listeners is a tale most often told from the point of view of Daniel as he makes his way through a plagued city, confused and alone even after meeting the mythical group known as the Listeners. From the start of the novel onward, the reader feels sympathy for Daniel, yes, but a certain camaraderie is also built with him. Quite often, I found myself in the same throes of emotion as the young teen and simply had to commend Mr. Demchick for his excellent portrayal of the boy.

In fact, if there’s one thing that Mr. Demchick gets right it’s human emotion; I found it so easy to connect with each character and understand exactly why he or she felt that way even if I didn’t agree with them myself. For instance, one particular boy named Terry continuously comes off as uncaring, but when the reader learns of his past later into the book, his nature makes sense.

There are instances where the writing becomes confusing and hard to keep up with, but as long as the reader takes it slow and sticks with it then the dialogue is always explained by the end of that section. I feel as though Mr. Demchick has an excellent grasp of the English language and (thankfully) did not plague the novel with errors. Indeed, there were very few instances that I found anything grammatically wrong with what was written.

Originally, I assumed this to be another apocalyptic zombie novel, but much to my enjoyment it isn’t quite either of those. Yes, there is a plague, and yes, humans sort of lose their minds, but they are most certainly still alive and capable of thought. In turn, the sections where these mutated humans attack are more suspenseful than in a typical zombie novel, as the reader is unaware of how that particular human will react.

It should also be noted that these plague-carriers aren’t the only monster in the book. Among the warring factions are the Listeners, a corrupt police force, and the doctors who may or may not be responsible for it all.

Overall, I can’t recommend The Listeners enough. There’s tremendous emotion to be found and Mr. Demchick’s portrayal of the human mind is astoundingly realistic. Action abounds within these 308 pages, as well as violence (both physical and mental), a few twisted romances, and plenty of well fleshed-out characters. By the end of the book, the real question the reader has to answer though is this: is the real evil here the police, the doctors, or the Listeners themselves?