The Scholastic Corporation bought the USA rights to Harry Potter And The Philosopher’s Stone in 1997 for US$105,000 – an unusually high sum for a children’s book. They insisted no American child would want to read a book with the word ‘Philosopher’ in the title and, after some discussion, the American edition was published in October 1998 under the title that author J.K. Rowling suggested, Harry Potter And The Sorcerer’s Stone. But what really was the Philosopher’s Stone? Not Rowling’s rather ham-fisted treatment of established mythologies, but the real Philosopher’s Stone? It was from philosophical assumptions that the alchemists of old deduced their own postulates about the unity of both the material and spiritual world, and the existence of a transmuting agent called the Philosopher’s Stone which, if produced, could transform base metals into gold, and act as a panacea when dissolved in alcohol.

There was much confusion as to how the Philosopher’s Stone was to be produced, and the following description is a generalised account of the process. The first step in the production of the Philosopher’s Stone was to place a substance (ie: excrement, semen, herbs) in a thick-walled hermetic flask. When the planets were in conjunction in the appropriate zodiacal signs and the invocations uttered, the flask was slowly heated in a furnace and the substance was thought to separate into the four elements: Earth (the residue at the bottom of the flask), Water (condensation within the flask’s neck), Fire (the ignition of material within the flask), and Air (the vapours remaining in the flask).

The second stage in the process was called the Nigredo. At this stage, the substance had been reduced to a black inert mass under the vapours that had been driven off. These vapours were allowed to condense and return to the black mass in the belief that the spiritual essence of the material (the vapours) that had been driven off from the charred body (inert mass) would give birth to a nobler substance when reunited with it (analogous with Christ’s resurrection). This second stage was repeated many times until it gave birth to the Phoenix, the third stage, so called because the black mass was said to burst into expanding feathers of white fire. These flames became red, then yellow then erupted into a flash of colour known as the Peac**k’s Tail, the fourth and final stage of the process. The explosion of light faded and left behind a red powder known as the Philosopher’s Stone which, when dissolved in molten metal would transmute it entirely to gold.

After having given an account of alchemical theory and practice, I shall now try to answer the following question: Does alchemy work? The answer is no, the transmutation of the elements cannot be achieved by alchemical methods and, in order to understand why, we will need to examine the true nature of matter which has been elucidated by modern science. All matter is composed of atoms, which in turn consist of a nucleus of protons and neutrons. The number of protons in the nucleus determines the nature of the element, for example mercury has eighty protons while gold has seventy-nine. The nucleus is surrounded by electrons whose number is equal to the number of protons – since the electric charge of the electron is equal but opposite to that of the proton, the atom is electrically neutral. The electrons orbiting the nucleus are arranged in shells, and it is the number and arrangement of electrons in the outermost shell that determine how an element behaves chemically. The alchemist’s experiments were of a chemical nature, and no chemical reaction can alter the nucleus of an atom. the number of protons in the nucleus must be changed in order to effect a transmutation. This occurs in nature with the radioactive decay of elements such as radium which eventually decays to lead.

However, there were cases where alchemical gold was tested and found to be genuine. In these instances, fraud is the most likely explanation. How might the deception have been achieved? One possibility is that powdered gold was introduced into the crucible via a hollow stirring rod, or the crucible may have a thick layer of gold lining its bottom, and concealed by paint. Alternatively, an ingot of lead dropped into the crucible may have been a mere shell which encased a solid mass of gold, and in cases where a skeptical observer provided a sample, an alchemist may have made a substitution using techniques similar to those employed by magicians. 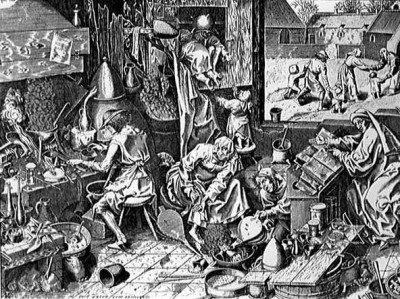 In conclusion, I think it can be said that although alchemy made contributions to chemistry in the area of laboratory techniques (such as distillation), its esoteric and magical theories have no place in the modern world, except as signposts to human folly. In today’s world, anyone who suggests that an alchemical transformation of the elements is possible, is either woefully ignorant of some very basic science or no better than the charlatans of old. For further reference on the subject of Alchemy, three publications proved invaluable in my research for this article: The New Guide To Science by Isaac Asimov (Penguin Books 1987), The Emergence Of Modern Science by J.D. Bernal (Penguin Books 1969) and Science In The Middle Ages by A.C. Crombie (Mercury Books 1964). 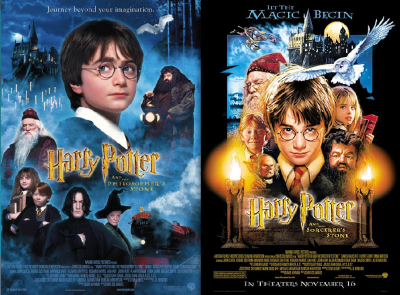 Arguably, author J.K. Rowling has succeeded turning excrement into gold with her series of rather clumsy (yet unfathomably popular) fantasy novels, and even I must offer kudos to absolutely anyone who can get children to read absolutely anything! And it’s on that rather bleak note I’ll bid you a good night and look forward to your company next week when I have the opportunity to raise the hackles on your goose-bumps with more ambient atmosphere so thick you could cut it with a chainsaw, in yet another pants-filling fright-night for…Horror News! Toodles!