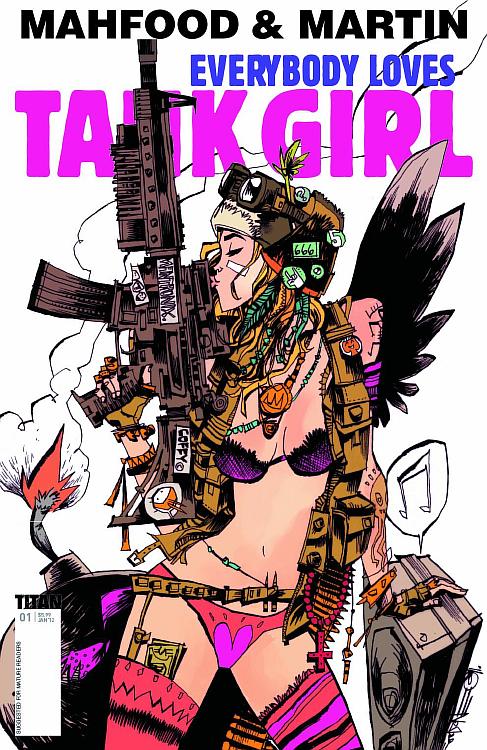 Everyone’s favorite outback anarchist is back to blow things up, swear profusely and offend the elderly in your household! This time, Monsieur Alan Martin teams up with wunderkind Jim Mahfood to bring you Tank Girl as you’ve never seen her: wild, raw, foul-mouthed and forever rockin’ but rendered in a style that will bring pleasure to thine eyes.

Tank Girl is a comic book series that follows the titular character – a girl who drives/lives in a tank – on her misadventures in post-apocalyptic Australia. Created by Jamie Hewlett and Alan Martin, it was first officially published in 1988 and had a solid run as a series. After more than a decade away, Tank Girl returned in 2007 and has been going strong since in various mini-series and one-shots.

The latest incarnation is the appropriately-titled Everybody Loves Tank Girl. The three-issue mini-series was published in 2012. Now it’s being packaged together as an 80-page, hardcover graphic novel, courtesy of Titan Books. It was written by co-creator Martin and drawn by Jim Mahfood (who also provides some previously-unreleased sketches as an added bonus). Our eponymous antihero is perhaps more badass than ever; she’s a gun-toting, foul-mouthed, sexy, powerful lady.

The Tank Girl series is known for its punk rock-influenced visual style, and Everybody Loves Tank Girl follows suit. While it seems disorganized at first glance, it’s definitely a controlled chaos. It may take a few pages to get used to to the Mahfood’s frenetic style, but by the end of the book you’ll be wanting more. The stories vary between color and black and white. The color works better for the book’s psychedelic nature, such as the LSD-induced rampage.

The headline comic finds Tank Girl fending off the Arty Farty Gang while acting as an unlikely babysitter for a boy named Feldman Haim. The saga of outback anarchy also finds Tank Girl and Booga, her mutant kangaroo boyfriend/sidekick, participating in such stores as The Automatic Psychedelic Hand-Grenade Crowbar Shit-Storm Massacre, The 16th Annual Australian Swearing Competition (in which you might even learn a few new dirty phrases), The Big Fucked-Up Car-Jet Rocket Thing and more.

Unlike most graphic novels, Everybody Loves Tank Girl doesn’t have much of an overarching story; instead it’s largely unrelated vignettes, with the common factors being Tank Girl and endearing immaturity. Everybody Loves Tank girl is a must-have for existing Tank Girl fans. As for those unfamiliar with the series, it may not be the best starting point, but most will still find something to enjoy. Mahfood’s erratic artwork proves to be the perfect companion for Martin’s absurd, over-the-top, crass stories.