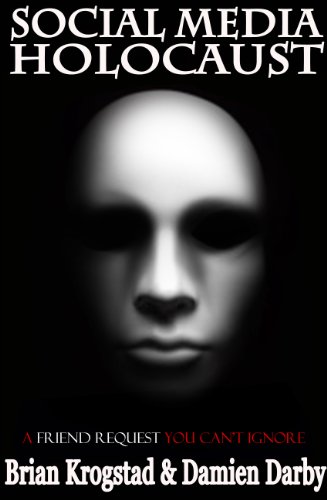 From the prologue:
“What you are about to read will disturb you; make no mistake. By the end of the first page you’ll be confronted with a troubling fictional story revolving around two thing that are deeply rooted in modern society: the fear of death and the obsession with social media.”

One of the golden rules for storytelling is to show rather than tell. A well-crafted story will speak for itself; there is no need to tell the reader that a story will be disturbing—the reader is more than capable of figuring that out on their own. Social Media Holocaust begins on weak footing; within the first six pages the reader is presented with a rough synopsis for the rest of the book. Show rather than tell!

Social Media Holocaust begins with a series of murders related to Facebook friend requests. Richard, an unemployed Farmville addict, is found decapitated and disemboweled—someone wasn’t too happy that Richard denied their friend request. Next up is Katie, an obese wheelchair bound drunk found hacked to pieces after ignoring a friend request. Before long everyone involved in social media is at risk, even those who delete their accounts in panic. The killer made a moving meme of when Jean screamed at the sight of Marty’s head. “Friends Don’t Let Friends Ignore Friend Requests.” it said in scrolling text below the grotesque clip.

The murders increase until it is clear that something bigger is going on than one murderous lunatic upset over his friend requests getting denied.

Social Media Holocaust is at its best in the beginning, where we meet interesting characters that meet their death shortly after. Unfortunately the book’s erratic structure and pace doesn’t allow for any true character development or attachment. While it has some bright spots, Social Media Holocaust reads more like an outline of a novel than an actual novel. The story is told by an anonymous narrator in a disjointed and often confusing manner and leaves the reader little to engage with.

The book does have some clever and amusing moments. Towards the middle we meet Jalex Bones, a character fashioned after a popular online conspiracy theory figure—the name speaks for itself. While Jalex’s story is intriguing, it further lends itself to the general identity crisis that Social Media Holocaust suffers from. The story is at times a slasher horror story, at times a comical look at our society’s addiction, and at times a story about revolution against consumer capitalism, greed and politics. Simply put, the authors tried to pack in too much in too little space.

The most frustrating thing about Social Media Holocaust is that is has solid potential. It would be a great read if it were presented in a traditional narrative format with developed characters and events. The intended story is far too much for the novella format and would be better served in longer form. A professional editor would go a long way in fixing this book as well; it has a number of typos and poorly structured passages.

Social Media Holocaust is the product of two authors, a task that is quite difficult to pull off. This likely played a role in the fractured voice of the book—there are too many chefs in the kitchen. That being said, I’m confident there are readers who will enjoy this offering, particularly those interested in the darker corners of modern culture and the increasing influence that social media has on us. I like to end reviews on a positive note; here is one my favorite passages from the book:

The shriek came when he swiftly sliced off a chunk of her bulging cottage cheese looking arm fat, stuffed it in her mouth, and began to choke her with it. Sweat and blood fermenting in her rolls of flesh coalesced with the scent of evil in the air as life finally escaped such a cruel body as hers.

Now that is fun! Social Media Holocaust is available on Amazon.