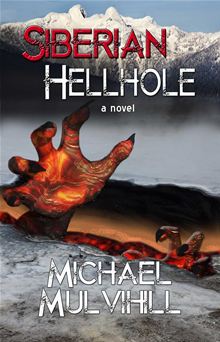 Michael Milvihill’s new novel Siberian Hellhole is a confusing, convoluted look at Post-Perestrokia Russia in which a man named Tobias is hired to guard what he soon discovers to be a literal hole to the pits of Hell. Those attempting to gain control of said hole include “…an unholy band under Asmodeus, demon leader of dark forces, and Ethagoria Nebsonia, master of the Siberian Vampires…”, along with a Russian Orthodox Church who wishes to expel its evil.

While this all may sound very intriguing (as it did to me when asked to review it), the execution of the story is, for lack of better words, subpar and sloppy. Sentences crop up that make little to no sense, such as: “Acting casually and innocently upon the logical side, The White Hand cradled the left hemisphere of Tobias’ brain in his hand. (The White Hand was also naturally action malevolently and enjoying these activities.)”

Personally, that kind of writing just didn’t sit well with me. A similar example just a few pages later has “the White Hand” discussing with Tobias about how “Neurons and neurotransmittors [sic], especially serotonin reuptake inhibitors, are particularly delicious. It is always the very brainy ones who have the tenderest brains.” It was at this point in the book, a mere twenty or so pages in, that I knew it would be a chore to read through the rest.

Mr. Mulvihill’s prose is simply strange and off. He seemingly makes an attempt to spice up his work with an overload of adjectives, similes, and metaphors, but it all comes off tasting bad on the tongue when one tries to read it.

Again, the premise seemed excellent. However, the execution is all wrong. If Mr. Mulvihill had used a more accessible writing style then this one may have been a knockout. As it stands though, do yourself a favor and avoid this hellhole of a novel.