The Director Of RUBBER Goes WRONG

Much like RUBBER, the killer tire movie from a few years back, the new film WRONG from director Quentin Dupieux appears to be another strange, quirky, bizarre ride that folks will be talking about for quite some time.

WRONG tells the tale of Dolph who wakes up one morning to discover his dog Paul has vanished and goes to some very extreme measures in order to find him. The official synopsis fills us in:

Dolph Springer (Jack Plotnick of Comedy Central’s “Reno 911!”) awakens one morning to find
he has lost the sole love of his life – his dog, Paul. Desperate to reunite with his best friend and
to set things right, Dolph embarks on a journey which spirals into the realm of the absurd. On
his quest, he alters the lives of several bizarro characters, including a promiscuous pizza
delivery girl (Alexis Dziena from HBO’s “Entourage”), a mentally unstable, jogging-addicted
neighbor, an opportunistic French-Mexican gardener, an eccentric pet detective (Steve Little of
HBO’s “Eastbound And Down”) and most mysterious of all, an enigmatic pony-tailed guru,
Master Chang (William Fichtner from HBO’s “Entourage”) who imparts his teachings to Dolph
on how to metaphysically reconnect with his pet.
From fearless cinematic surrealist Quentin Dupieux, the director behind the head-exploding
Rubber, Wrong is an entrancing and wholly original hallucinatory universe all its own, which
TwitchFilm calls “a wild and hilarious ride of absurdity!”

Check out the trailer, it’s pretty crazy and strange:

I’ve got lots more on this one in the coming days so check back for updates. 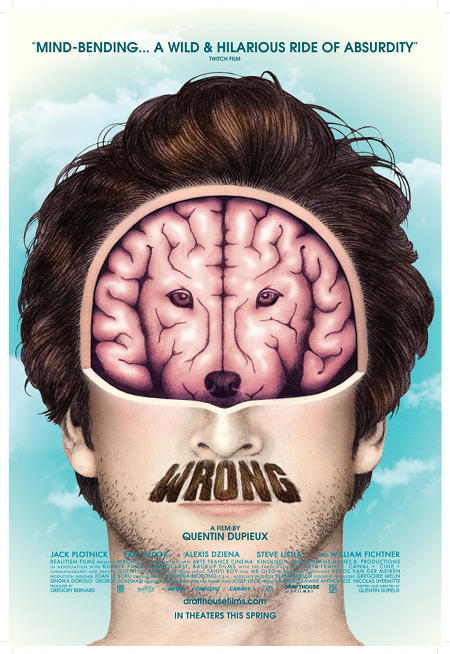