Home | A Great Retro Trailer For IT CAME FROM YESTERDAY

A Great Retro Trailer For IT CAME FROM YESTERDAY 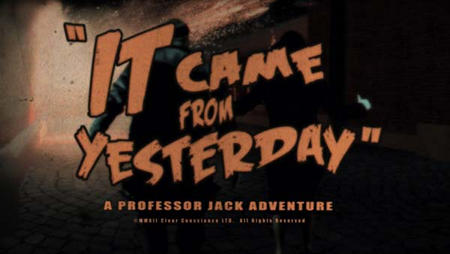 Being a child of the old black and white B movies when I see a title like IT CAME FROM YESTERDAY, I am immediately drawn towards it. While certainly paying homage to the very film style I am mentioning IT CAME FROM YESTERDAY appears to embrace modern technology with a ton of computer generated effects. Watch the trailer and see for yourself:

I love the idea and premise and can’t wait to see the finished project.

Synopsis: “IT Came From Yesterday: A Professor Jack Adventure is the feature film that launches scientist/adventurer Professor Jack into unknown realms of adventure! Along with his sidekicks, Buddy and Penny Precious, Jack must unravel the mysterious plot of inter-dimensional creatures hell-bent on enslaving the human race in this serial-inspired sci-fi extravaganza! Starring Jeff Waltrowski (Project: Valkyrie), Nathan Hollabaugh (George A. Romero’s Deadtime Stories, Unstoppable), Nayli Russo, Joel Ripka, and Erica Highberg (Swarm of the Snakehead).”

Tags It Came From Yesterday