Greetings all you wonderful pieces of meat… Yes, I called you all pieces of meat, because we are all edible and I’ve always wanted to go all Hannibal Lector on someone’s ass, just for the fun of it. Maybe I’m alone on all the cannibal carnage, but heck, I say try anything once. Anyways, I was recently mentioned in www.horrorinthehammer.com ‘s “Screamwave Horror Podcast #15”!! You can check it out at www.screamwave.libsyn.com and hear them mention me in their ‘Skump’ contest (yes, I’m popular, so ha!). And I guess that’s what happened with me since last time we met… I don’t have a very exciting life it seems. Well, except for corrupting the minds of innocents and then obviously reaping some souls for the dudes in charge and of course writing, living, breathing horror. So on to some neat stuff:

This is not a remake of the 1976 movie or associated to it in any way (I hope), actor Mark Cray (“The Ritual”), is teaming up with award-winning film maker Bobby Jones (“Hellweek”,“Tear” and “The Candidate”) to begin pre-production of the action packed horror film “Girl Scout Cookies”.  Starring the beautiful screamqueens Monique Dupree (“Satan Hates You”), Tara Cardinal (“Legend of the Red Reaper”), Jessica Cameron (“Two Doors Down”), and Deneen Melody (“Divorced Dudes”), with a special appearance from Actress Hope Marie Carlton (“Nightmare on Elm Street 4”) and introducing Erica Soto and Ryan Rolando (Front man for the band “Payback”).  The Film will be shot almost entirely on the Iron Range of Minnesota and is scheduled to begin the production phase at the end of June 2011.  “Girls Scout Cookies” is a low budget independent film that will be shot over 5 days towards the end of June 2011 between Biwabik and Hoyt Lakes.  The basic plotline has been released as:

The story centers on a group of couples that go camping for the weekend. However, things go terribly wrong when the guys realize the women are not who they seem and lives now hang in the balance.
Mark Cray and Bobby Jones said in the press release that: “There are some incredible action scenes and many of the women involved have already started training with some of the weapons and fighting styles they will be using throughout the film we’re extremely excited about the project and enthusiasm displayed so far. We’ve picked up a huge amount of momentum that is really going to translate into a phenomenal feature film!”
Well, with such an exceptional line-up of actresses involved, this could very well be one of those phenomenal feature films, it all just depends on whether or not the movie is done correctly. Let’s see what happens next, shall we?

MY SOUL TO TAKE

We Craven’s new flick “My Soul to Take” has revealed their new poster… It looks a little drab in my opinion, but what can you expect from a ‘thrilling 3D’ film? However I’m nice, so I’ll show it to you to judge for yourself… (By the way, I love Wes Craven regardless, so don’t bitch) 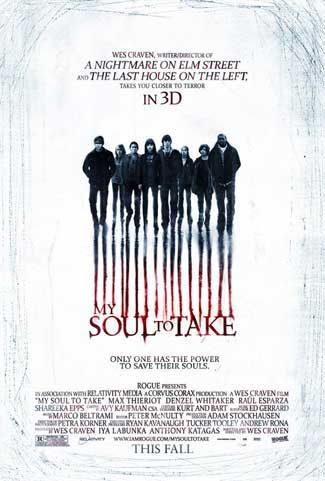 Remember I told you guys about SKG Films and their upcoming projects?  You don’t?  Well SKG Films is currently working on two projects and one of them is named “Abolition” which is written and directed by Mike Klassen.  This particular film is taking the supernatural side of the horror genre specifically into account.  Abolition is about the question, “What if your next door neighbour is the end of the world?”  Joshua, the protagonist in the story, is burdened by the anti-Christ and it’s about all the good and bad things about having this supernatural ‘problem’.  And then the other film SKG Films is working on is titled “Bitter”, which stars Chris Carnel (“My Bloody Valentine”, “The Devil’s Rejects”) and Kane Hodder (“Friday the 13th”).  You can read more about it in my previous columns, but looky looky what I found!  Some concept art of the upcoming movies by SKG films has been released and man do they look pretty!  These are some nice teasers for you guys, so say: “Thank you Monique” and enjoy the pretty pictures. 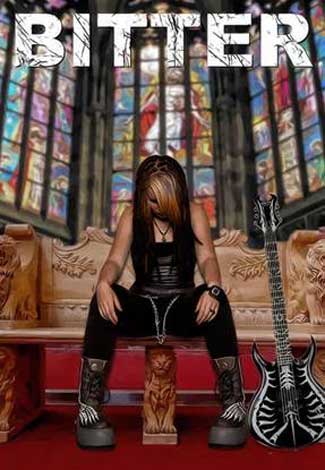 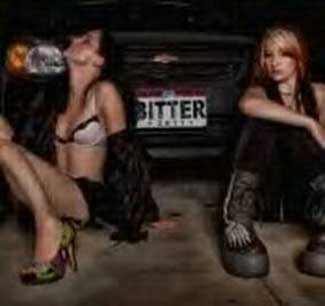 Hope you’re as intrigued to see what’s next in SKG Films’ future as they develop these movies… I know I am. 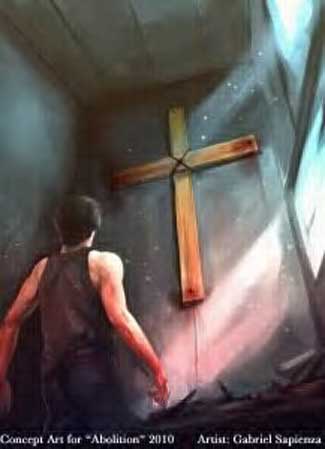 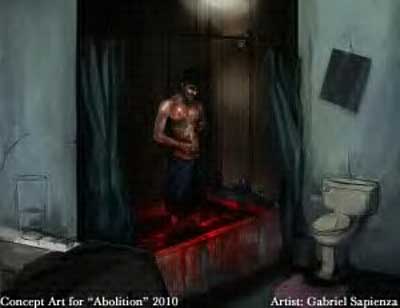 If you’re a die-hard horror fan, like me, then you’ll probably have read the news by now about how brilliant [sarcasm] the assholes in Hollywood are by the rumoured remake of the werewolf cult classic “American Werewolf in London”.  If you’re not a die-hard horror groupie, then I’m sure you were also shocked by reading the previous sentence.  I mean everyone must be wondering why there isn’t a horror fan in charge of regulating the horror film output or something (I know I am), but anyway on to the story…  According to some recent news, Dimension Films found a writer for this catastrophe of a remake in the form of one, Fernley Phillips (“Number 23”) who has been in talks for rewriting and putting a ‘modern spin’ on the classic horror/comedy.  Apparently John Landis sold the remake rights to Dimension Films.  And as this terrible remake is in talks, the Weinstein Brothers are hectically busy trying to get the remake of “Hellraiser” off the ground.  This original Clive Barker creation will most probably be a better remake than most, seeing that Barker will write the screenplay and produce and will be very involved in the film just like in the original.  Other names that have been linked to “Hellraiser” are Anthony Diblasi (“The Midnight Meat Train”) and Joe Daley (“Book of Blood”) will co-produce, but no cast has been attached to the film and neither has a director.

In my opinion, I’d actually give the “Hellraiser” rumours the benefit of the doubt, seeing as there is a bigger budget to go on and that the names being thrown around does look impressive.  Not all remakes are bad… most are, but one out of ten remakes isn’t THAT bad, so maybe this is one of those.  Only time will tell.

Something else that came under my attention is the animated remake of “The Addams Family”.  Tim Burton (“Corpse’s Bride”, “The Nightmare before Christmas”) could be involved with the project by adapting this classic into a stop-motion 3D picture.  So far there hasn’t been much news on what is going on, seeing that it’s still in the development phase, but producer Christopher Meledandri has confirmed that it will be based on Charles Addams’ original comics that appeared in The New Yorker. 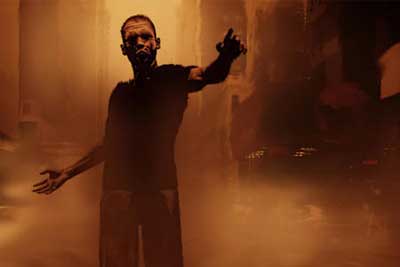 A prequel to George A. Romero’s classic zombie flick, “Night of the Living Dead” is in the works and is called, “Night of the Living Dead: Origins 3D” (stop with the 3D nonsense!) and according to imdb.com it has been detailed as an animation/horror!  I hope to the horror gods that’s wrong, but if it isn’t we can blame newbie writer/director Zebediah DeSoto (“Thirsty”) for this catastrophe.  So far the cast has been confirmed as Danielle Harris (“Hatchet 2”, “Halloween”, “Halloween 2”), Tom Sizemore (“Natural Born Killers”, “Black Hawk Down”) and Bill Moseley (“The Devil’s Rejects”, “Army of Darkness”).  It’s an impressive cast, no doubt about it, but I can’t look past the 3D nonsense and the ‘could-be-but-hopefully-isn’t-animation-horror’… I’ll need to delve deeper, but when I get some more information on this I’ll definitely give you the details. 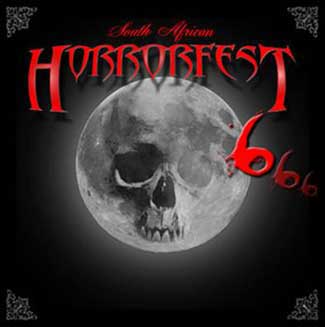 Holy mackerel! If the FIFA 2010 didn’t convince you to come over for a visit to sunny South Africa, then book your plane tickets and come on down to the Labia Theatre in Cape Town for some good horror fun!

Since it’s inception in 2005, the “SA HORRORFEST FILM FESTIVAL” has been the Halloween event on the continent, showcasing horror, the macabre and the strange from around the world.  The 6th instalment of this exciting week of horror will include new movies, classics, fan favourites, sneak previews and premieres from across the world, as well as several chapters of short films (international and local), Halloween dress-up prizes and awesome audience give-aways before each movie.  If that wasn’t enough to get you giddy, then you can revel in the fact that there will again be a big Horror DVD collection (of several dozen movies) up for grabs for one lucky viewer!  To make things even better, there will be a spectacular live movie soundtrack performance to the screening of a classic silent horror movie by “The Makabra Ensemble” (created by members of “Terminatryx”, collaborating with members of “Lark” and violin maestro Matthijs van Dijk).

The final festival line-up will be released soon…

Then, there is also something juicy for all you horror writers! The new literary leg, which was added in 2009, with the Lounge of Horror Fiction readings, has been expanded in 2010 to include “Bloody Parchments’s” short story competition: www.shadowrealminc.com/bloodyparchment/index.htm

Is that enough to convince you yet? No? Well, maybe you’d like to hear about some other awesome features coming in the form of dark art & photography exhibitions… or maybe you’d like to hear about the limited edition 2009 HorrorFest/Provoyeur Wine Range that was very well received last year and that something similar is in the works for 2010? Maybe a prominent figure in horror movies that’ll be at the event will make you whet your curiosity more?

So come on down and get a taste of some South African horror… you already like me, right? Imagine a few hundred, perhaps a thousand horror fanatics just like me… (I’m still trying to sort out my stuff, but at this point, I’ll see you folks there.)

So you want something truly horror-related to read and you don’t know where to go? Well, Garry Charles (“Hammerhead”), whom I have dubbed the “Stephen King of Britain”, makes almost all his novels available for free download! He’s super nice and somewhat twisted (which I adore) and his novel “Death Tide” will only be available for free download until somewhere in September. There are a lot of other novels up for free download though, all of them just as freaky crazy as “Death Tide” and only available at: www.garrycharles.co.uk (I’ve been devouring as much of his books as I possibly can just to try and figure out the man behind the pen… and it turns out his pretty insane, so I know you’ll love it.)

While you’re at it and downloaded some of the crazy, go order “Hammerhead” from your local bookstore… Cannibalism has never been so awesome! 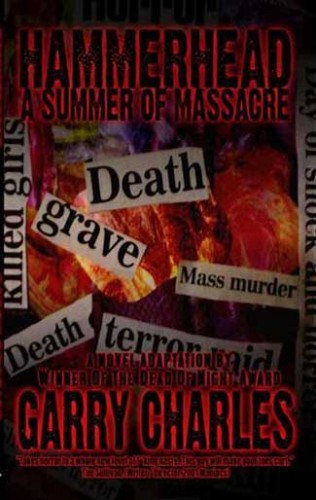 And with that I bid you farewell until next time when I give you the lowdown on what’s what. Keep on being your horrible, lowly, terrifyingly, strange selves, but remember to keep it at least semi-law abiding.