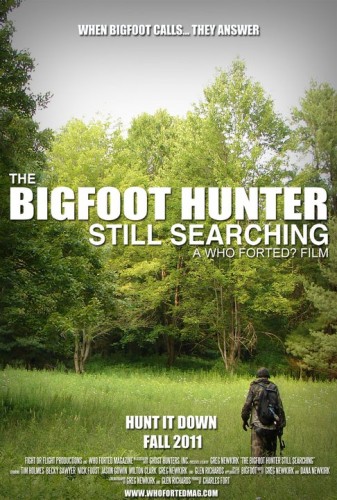 How long has Tim Holmes been searching for Bigfoot?

When I first met Tim, it was about 2005, and at that time he claimed to have been hunting “The Beast”, as he called it, for about three or four years. Tim is a former military man, and he told me that his quest to hunt the creature down started when he was deployed in the Philippines and literally tripped over a Bigfoot that was sleeping by a tree. After that sparked his interest, he started researching Sasquatch sightings in the southern New York area, and lo and behold, there’s quite a few, so he formed the Elmira Bigfoot Watch and the rest is history.

How would you compare this to other Bigfoot films?

That’s a tough question, but it’s not really like any other Bigfoot films. In fact, while there’s plenty of actual evidence of Bigfoot in the film, like footprints, vocalizations, and even a very strange encounter that caused Tim (and a few of us) to c**k our guns and run for our lives, the focus of the film is primarily on Tim and his partner Becky, their fairly odd relationship, the interaction between GHI and The Bigfoot Hunters, and just the sheer weirdness surrounding the entire situation.

Everything from the way that I stumbled onto Tim, to what made the crew and I want to go Bigfoot hunting in the first place, to the subtle things going on in the background that connect to some very big moments within the Bigfoot hunting community as a whole, they’re a strange turn of events that couldn’t have been planned. I’d say that this is just about as “raw” as a documentary about people invested in cryptozoology can get. When we shot it, we were just kids with a few handycams who had little to no knowledge of Bigfoot hunting (this was a good many years before shows like Finding Bigfoot came out), and for some reason decided that it was a good idea to follow a strange man with a lot of guns into the forest. The interesting part was finally editing the film six years later as an adult, and wondering what the f*ck we were thinking. 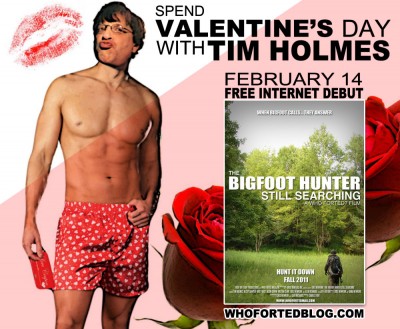 What kind of preparation was done to get ready for this journey?

Zip. It was all very off-the-cuff. Once I knew that there was a Bigfoot hunter in the area, I looked up his address and one night while a few of us were out for dinner, we realized we were in his area and decided to swing by. At first we didn’t believe that his address could have been accurate because it was located in this big office building in downtown Elmira, a building that was filled primarily with doctors and lawyers. Well, sure enough, we walk inside and see his name on the wall – Timothy Holmes: Elmira Bigfoot Watch, 2nd Floor.

When we got to his door, we could hear the faint sounds of Bruce Lee screaming, and when I finally got the urge to knock, the door swings open and this 7 foot guy is standing there, head to toe in camo fatigues, and yells “heeeeeeey! I know you! You’re the ghost hunters! Come on in!”

We hung out with him for awhile, asked him if he’d take us Bigfoot hunting, and that was that. About a week later, we met him at his office with all our gear and headed off to the woods. We had no idea what we were getting ourselves into, and we didn’t actually think we were going to find Bigfoot. 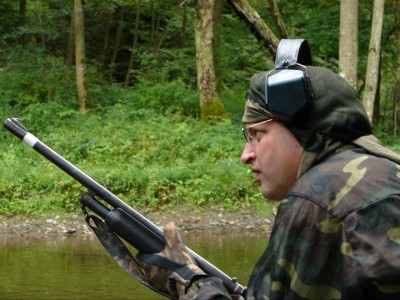 Did you have any moments that you thought you might be close to finding Bigfoot?

A few, as strange as that might sound. Tim and Becky still maintain that we actually DID find Bigfoot. They started finding “markers” all over the place and going on about a “Bigfoot Highway”, but it didn’t convince us very much. That started to change when we found a set of huge footprints deeper into the forest, exactly like the kind you picture when you think of the iconic tracks. What finally convinced us that something strange was happening up on Connecticut Hill was hearing something actually vocalize in response to Becky’s whoops and grunts. It was deep, guttural, and eventually led to a very weird standoff at the edge of a field that had everyone c**king their shotguns and preparing to fire. It was tense, and I was convinced that something intelligent was in the woods when it started throwing things at us.

Were there any dangerous moments during filming?

Just being around Tim Holmes is dangerous. If he’s not swinging a shotgun around, it’s a machete, a high powered rifle, the battering ram welded to the front of his gigantic truck, or the fact that he carries live grenades on Bigfoot hunts. Actual grenades that we’ve had to talk him out of using.

So yeah, I’d say that our lives were in danger just about every moment we were with that man. 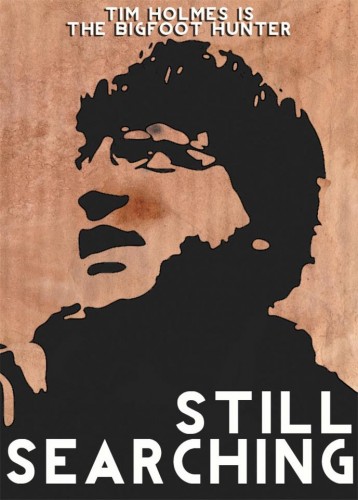 What was the strangest thing that happened while filming, The Bigfoot Hunter: Still Searching?

Such a tough call. If it wasn’t something yelling and throwing rocks at us from inside the woods, it had to be going to Burger King with Tim. He has this obsession with Burger King that can’t really be explained as much as it has to be experienced. Here we are, five kids preparing to go on a Bigfoot hunt, sitting around a table with Tim, who insists that we all wear the cardboard crowns while we eat. He actually went to the register and demanded the crowns. Once the crowns were firmly affixed to our heads and Whoppers being shovelled into our mouths, he sat there and regaled us with tales of competing in Kung-Fu tournaments in Japan. It doesn’t get much stranger than that.

How long did filming take?

We shot the film over the course of two weekends in 2006, but there’s a bit of footage toward the end of the film that was filmed variously from then until about 2010.

Where were the primary search locations?
Every single bit of the search took place on Connecticut Hill in Alpine, New York. Not only is it Tim Holme’s primary research location, but it’s got a pretty varied history of everything from UFO sightings, to strange vortexes that will affect electronics, to Satanic cults, and all other kinds of weirdness. For a long time it’s been known to locals as “The Alpine Portal”. 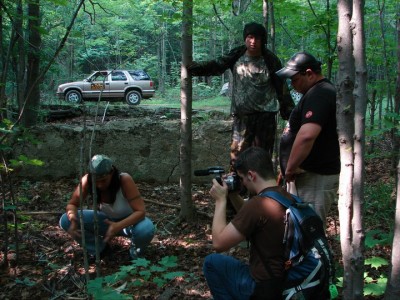 If Bigfoot truly does exist, why hasn’t he been found?

That’s a question that I couldn’t even begin to answer, because I don’t think that I really have one. There’s plenty of people who think that they’re just too smart for us to find them. There’s others who believe they’re ghosts, some who think they have the ability to slip in and out portals, can become invisible, or that they’re some kind of advanced alien race. Becky told a story which we actually included in the DVD’s deleted scenes where she mentions being hypnotized by a Sasquatch. When she came to, he was gone. Tim on the other hand just thinks that everyone looking for Bigfoot really, really sucks at it. Personally, I’m not afraid to say “I don’t know”. I think that if you force yourself to choose a side in the ongoing battle of skeptic and believer, you’re bound to lose the kind of magic that exists within the stories of elusive monsters and paranormal phenomena. I think that being able to say “I don’t know” is required to actually experience these kinds of stories the way they were meant to be experienced, and aligning yourself too steadfastly to either side pretty much guarantees that you’re going to miss the point.

Now that “The Bigfoot Hunter: Still Searching” is released, will the search STILL continue?

Of course it will! The search continues not only for Tim (who was actually in the running for Spike TV’s new show The Ten Million Dollar Bigfoot Bounty until he was unceremoniously canned last week), but for us as well. This summer I’ll be debuting an original web series titled Planet Weird, and in a way, it’s the spiritual successor to what I started with Still Searching, but with an actual budget and real film equipment. The project all about engaging the strange rather than merely looking for it. Over the last few months the gang and I have been all over the country poking our heads into everything from alien abduction, werewolf sightings, psychic phenomena, real vampires communities, and hanging out with all manner of the weirdest people, places, and things. We even went back to Bigfoot, and had a totally, completely different experience than Still Searching. People can check out the trailer for the series and get all the info by checking out www.weirdhq.com, or heading over to www.facebook.com/planetweirdhq .

I should also mention that The Bigfoot Hunter: Still Searching will be streaming online, in it’s entirety and totally free, beginning February 14th at Who Forted. If people weren’t lucky enough to get tickets to the sold-out, weekend premiere in 2011, or missed out on owning one of only 315 of the physical DVD’s we printed to support Planet Weird in 2012, they’ll finally get the chance to see the see the flick this year. Valentine’s Day seemed like the perfect time to tell the story of a man and his one true love: Bigfoot.