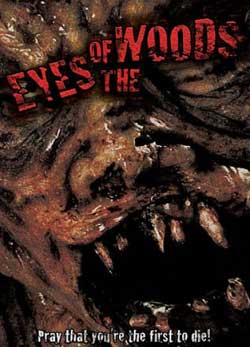 If anything can be said for Eyes of the Wood it is that is full of ambition. In spite of its ultra low budget, the film utilizes three different directors, had a plot that teeters between two different time eras, and has some impressive special effects. The prologue to the film is unique and gives viewers a fresh take on the background and purpose for the villain (in this case a demon) to be stalking the said woods referenced in the title.

You see, the film starts in Puritan times where a grieving father decides to make a deal with the devil in order to deal with the loss of his daughter. Surprisingly, the devil misleads the man and instead turns him into a flesh eating creature confined to stalk the woods for the rest of eternity. After tearing apart his fellow townsfolk, the film jumps to present time and introduces us to a group of friends preparing for a weekend road trip. It is worth saying that while the opening scene does contain some impressive gore, everything else about it is eye-roll inducing. 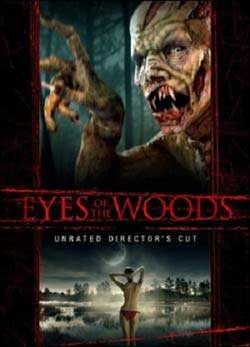 First and most recognizable, the acting is atrocious. The performers try their darndest to speak like they thing early Puritan Americans sounded, but one has to wonder what their inspiration or example sources was? And though they are wearing the appropriate costumes which seem to be right out of the “Dress Like A Pilgrim” section of the local Party City, none of the actors can shake their modern mannerisms.

However, the acting could be somewhat forgiven in the technical aspects of the film were above average; unfortunately, that is not the case. The sound is muffled throughout and there is something completely off with the lighting of the film causing is to casually fluctuate from being too dark at times to too bright. The editing during the attack sequences looks like it was done willy nilly with no fluidity from once shot to the next. Honestly, it will be a miracle if ninety eight percent of viewers do not shut this off by the end of the opening sequence.

Fortunately, for the five percent who tough it out and continue watching after the opening sequence, the technical aspects do improve slightly, and I assume this is where a different director took over because the entire tone shifts. The film now becomes your typical and cliched “kids on a road trip get stranded in the middle of nowhere and go traipsing through the surrounding woods to look for help but instead encounter a ferocious killer” flick.

Now, even though the acting is still pretty bad, the banter between the group is slightly amusing and it is refreshing to see characters who aren’t the typical slasher film victims. However, after about five or ten minutes, when it is obvious that nothing is going on except the banter between the characters, the film becomes rather tedious. Despite an opportunity to flesh out interesting character, the script instead opts to make them very one dimensional with no connection to the audience.

After what seems like hours, the group finally gets a flat tire and an excuse to go searching about the woods. Of course, the demon from the opening sequence is gleefully waiting to tear apart those stupid enough to wander into his territory and that is exactly what he does.

It is here that the third director must have taken reign because the film once again shifts tone and visual styles. And while, again, the special effects are the highlight, everything else just falls flat. The action just takes too damn long and the sloppy editing and the lack of attention to detail and any clear vision really hinder the film. It honestly seems like no one involved (except the special effects person) was completely invested in or had a clear vision for the film; the ambition was inherently there, but nobody really grabbed ahold of it and ran with it.

In the end, Eyes of the Wood becomes another in a long list of forgettable direct to video horror films. It is a shame that with three directors, the film is not more polished and focused and this certainly illustrates the case that more is not better. A vision and focus must be established and this films lacks of either gives the viewer perfect reason not to care. 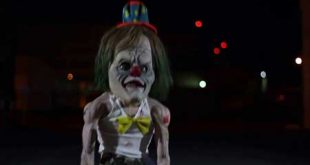