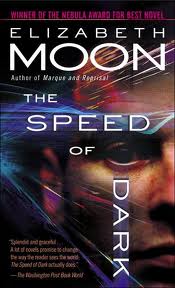 “Out there is the dark: the dark we don’t know about yet. It is always there waiting; it is, in that sense, always ahead of the light… I will never come to that end, chasing the light.

Now I get to ask the questions.”

Most of us, if presented with the option of fundamentally changing who we are, what makes us ourselves, would automatically decline. The importance of individualism, the idea that what makes us different from others is what make us matter. But what about those whose defining traits are things seen as a detriment to both others and themselves? The clinically depressed, schizophrenic, violent or obsessive who are not able to function the way the majority of us do. Is it okay for us to say that they should want to change? That’s the question that lies at the heart of Elizabeth Moon’s The Speed of Dark.

Here we have Lou Arrendale, a functional autistic man living in a near future where early treatment has eradicated the condition for future generations. Despite social awkwardness and difficulties fitting in due to his condition, he is gainfully employed, has a small circle of friends and enjoys fencing as a hobby. Now, a new surgical procedure is available that may “cure” him of his autism. Faced with pressure on both sides, he must decide whether or not to go through with this surgery that may well completely change the person he is.

First off, I can’t express enough how well Elizabeth Moon conveys the world through the eyes of an autistic person (at least someone residing in this specific range of the autism spectrum). In my real world profession, I have had the great pleasure of working with several autistic people and there were many times, over the course of the reading, that I found myself comparing the patterns of speech and approaches to problem solving she presented with what I experienced. Not only did the interior world of Lou ring true, but the exterior world, the way others treated and reacted to him did as well. Her dedication to conveying this completely alien world view and experience shines through on every page. Sure, it is an attempt at translation and certainly must lose something of the truth of the experience in the process, but this is the most honest portrayal of the autistic mind I personally have experienced in print. It makes for a wondrous and powerful experience that I highly recommend even if there was no other reason to read this.

However, there is more to The Speed of Dark than just a portrayal of autism. It deals very intimately with the question I mentioned at the start and it doesn’t allow the answers to come easy. While Lou is our primary concern, other applications of the same dilemma are also presented. In this world, criminals are altered in much the same way, oddly similar to the type of behavior modification detailed in A Clockwork Orange. It’s argued by the society that it is less cruel than prison and certainly better for the other people who have to live around these individuals but even those arguing for the procedure don’t seem 100% behind it. This is a tough issue and Ms. Moon does her best to keep from oversimplifying it.

WARNING: this paragraph will get more than a tad spoilerish so you might want to skip to the next paragraph if you wish to avoid such things.

Now, I have a bit of a problem with how the plot is resolved this. In the end, it feels like Ms Moon, through the choice made by Mr. Arrendale, is still making a decision for us even if it is not an easy one. As much as she is vehemently arguing against forcing the change, the end would seem to indicate that this type of change should be desire because change is a good thing. Of course, if he had made the opposite decision I may very well have been complaining that as well. Perhaps, if it had ended roughly sixty pages earlier, with the decision firmly in his hands and on the cusp of deciding, then that issue may have been avoided while leaving the complexity of the issue intact. I’m not sure.

I’m done spoiling the end for you.

I’m not certain what I think, now that I’ve finished. Not sure where my opinion on the ideas expressed within this book lies. That isn’t a bad thing, though, not by a long shot. Moon manages to raise important questions in a time when we possibly too readily push personality changing pills on people in order to make them more normal without even thinking about it. The answer isn’t easy or simple and may not even be that important compared to the simple act of asking the question as we fumble through the dark.