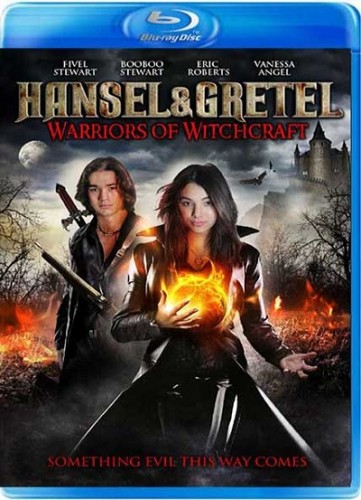 American teenagers Hansel and Gretel (no, really) are imprisoned by an evil old lady who lives in the woods and makes meat pies out of the youngsters she captures.

When the fateful words ‘An Asylum Production’ appeared on my screen, barely a few seconds into the movie, my heart sank. For those few innocent souls who have still to hear of The Asylum they are a production company that specialises in low-budget rip-offs of current big-budget releases. So if you’ve ever wondered who’s behind the likes of PARANORMAL ENTITY, TRANSMORPHERS or CLASH OF THE EMPIRES now you know. Evidently this particular movie is a rip-off of the forthcoming HANSEL & GRETEL: WITCH HUNTERS, which will star Jeremy Renner, Gemma Arterton and Famke Janssen. The best that The Asylum can offer the viewer is Dee Wallace who, by my reckoning, last had a hit movie in 1983. Neither should it surprise you that, despite the title The Asylum have given their film, Hansel and Gretel aren’t warriors and there’s precious little witchcraft in it. 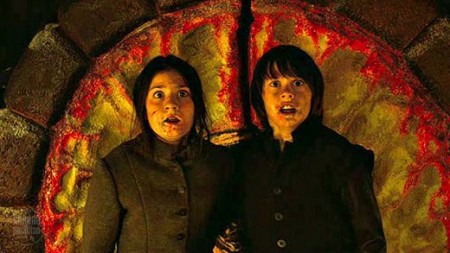 The Hansel and Gretel in this telling of the fairy tale are two feisty American teenagers. Hansel (Brent Lydic) is a feckless young man, bright and brave but emotionally scarred from the premature death of his mother. By contrast, Gretel (Stephanie Greco) is a thoughtful and hard-working young woman who has a part-time job at Lilith’s (Dee Wallace) bakery ‘The Gingerbread House’. When their father (Steve Hanks) breaks the news to them that he intends to marry again and sell the family home, Hansel is outraged and storms out. After congratulating Dad, Gretel dashes after her brother.

Realizing that Hansel will have headed into the woods where he, Gretel and their mother used to play, Gretel soon tracks her brother down only to find that he has his leg caught in a bear trap. Gretel manages to free him and together they stumble to a nearby cabin to ask for help. It turns out that the cabin is owned by none other than Lilith, who welcomes them in. Lilith, a sweet old lady with a neat line in home-made cakes, pies and candies, encourages them to stay for the night. 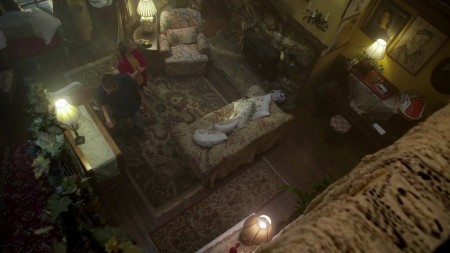 The following morning Gretel wakes up to find that Hansel has apparently been taken to hospital by a neighbour. Feeling somewhat confused, Gretel is further shocked when Lilith offers her the deeds to The Gingerbread House, saying she wants Gretel to follow in her footsteps. Suspecting that something is not quite right, while Lilith is in the kitchen Gretel has a nosey around and finds a bloody fingernail beneath a heavy wooden chest inside which she finds a secret flight of stairs leading to a dingy basement…

Up to this point the film is a reasonably entertaining update of a classic fairy tale: it’s corny as hell but there’s some fun to be had in spotting the thinly-disguised links to the original story. However, once Gretel descends the stairs into the basement the film degenerates into just another torture p*rn horror movie. My suspicion is that it was always intended to be just another torture P*rn movie albeit one that was hastily rejigged into a Hansel and Gretel movie in order to capitalise on the impending release of its better financed rival. And that, I suppose, is what is most dispiriting about The Asylum’s productions – not that they piggyback on the name of other, better movies but that once they’ve done so any attempt at doing anything interesting ceases.

So the rest of the movie is much like any other torture P*rn movie you’ve ever seen: girls in their undies get cut up by big hairy men, rescue attempts end in other people getting cut up, and after virtually everyone has been cut up there’s a sort of twist ending. The standard of the visual effects isn’t great but boy there’s plenty of them, enough to keep gorehounds happy anyway. The only memorable sequence is a drug-induced dream sequence in which three characters imagine themselves dying in bizarrely elaborate ways, one of which recalls a similar scene in Dario Argento’s brilliant SUSPIRIA. But it’s slim pickings really and not really a movie I can recommend with any great enthusiasm. 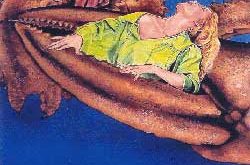