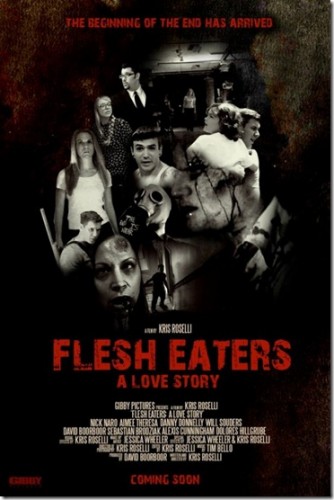 Today’s the day that Troy will propose to his long-time sweetheart Jamie. Unfortunately, the very first days of the zombie apocalypse have arrived, which leaves Troy a little more of a challenge to get to his beloved who is trapped in her office building. Will he make it in time?

According to the opening minutes of “Flesh Eaters”, the infamous “bath salts zombie” attack that sent the internet a reeling WAS in fact the beginning of the zombie apocalypse. At least, the fake radio news cast and very sparsely populated protest at the Center for Disease Control at the beginning tell us that.

You see, it’s a little tough after that to tell exactly how big this “apocalypse” mish mash is. People are still going to work, watering their lawns and driving around with the windows rolled down as one would see in these non zombie apocalypse times we live in. Sure, there’s a zombie here, a zombie there, a burning building in the distance. But, the fact that people are still filling out their tax forms (no, I’m not joking) kinda puts a damper on any post apocalypse excitement. Not that there is any real action to speak of. The acting is so wooden, and the actors mannerisms so uniformly awkward and uncertain, and the sfx so basic that its hard to tell who exactly is undead, and who just needs to go back to acting school.

The awkwardness level is ramped up when the film tries to throw in some jokes- none of which are funny, and all so badly delivered it does make one wonder if they were in fact written as jokes to begin with. And it is , in fact, as the title declares, “a love story”, with the main plot point concerning a guy who needs to rescue his girlfriend from her office once her boss becomes a member of the brain eating brigade. However, the chemistry between the two actors playing the couple is so nonexistent, it makes you wonder why on Earth the boyfriend half of the duo strapped on those obviously fake guns and went out to save her in the first place.

“Flesh Eaters” is a deeply disappointing, deeply unoriginal zombie film that doesn’t even try to ape the best aspects of the genre. It ultimately comes across as a lazy production, as if it was written, directed, and especially edited, by someone who took very frequent smoke breaks. And I don’t mean with cigarettes. 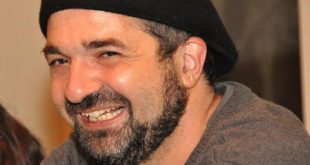 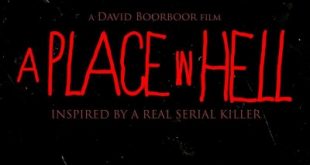 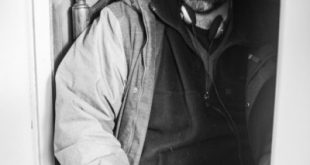 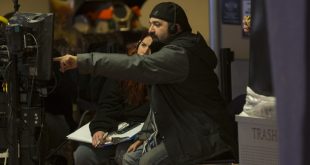