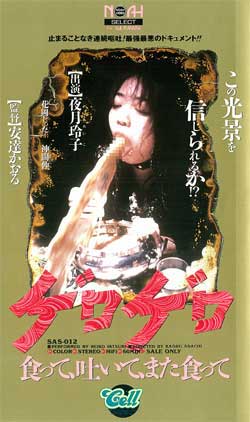 Tracking this movie down has been somewhat of a challenge. Though in that same statement, it is probably for the better as far as most are concerned. This film goes beyond the CAT III boundaries by jumping straight into some truly sick perverse hard to watch material. If you have read our review on Squirmfest, then you already have an idea what this film focuses on. 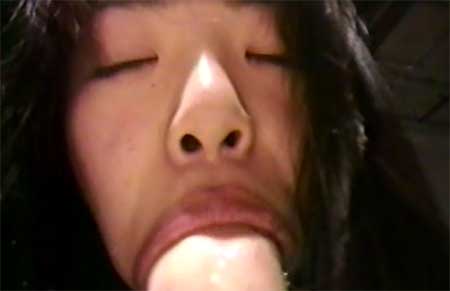 Now the copy I received failed to include subtitles, but in the case of “Terrible Meal“, there really is no point in hearing what little dialog there is included. Essentially we meet up with a young lady (lady is a stretch) that agrees to be filmed on camera while she eats. As soon as you can say “sushi”, she is dropped down in front of a nice meal prepared for her with a variety of Asian delicacies.

Then for about 5 plus minutes we are forced to watch her stuff her face with just about everything they can throw at her (food, that is). A bowl that sat empty previously is quickly pulled in front of her as we “then” have to watch (well, you actually don’t) her regurgitate all she has just eaten “back” into this bowl. Now I’m not sure about you, but I could think of better ways to spend my time. As you can see per some of the included stills, this girl literally rams her hand down her throat to induce every bit of food item she ate to resurface. 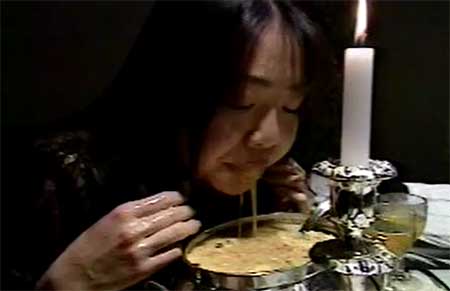 Then (yep you guessed it) like the trooper she is, pours it into soup bowl and has at it like a freshly prepared vomit chili. Now this back and forth celebration of vomit eating goes on for about 30 minutes, till it’s time to move on (and she does).

The film quickly migrates into typical blurred out Asian p*rn which simply is “no” treat coming off of various vomitings and exchanges. This hour long atrocity wraps up after mixing 2 genres into a hybrid sick fest that I can’t see pleasing any one for that matter. The film has no story, no purpose, or reason other than being marketed for what it is. 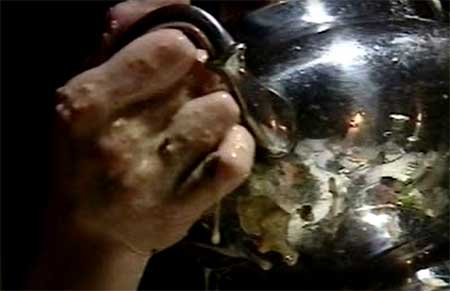 As you guessed, this shock entry into what I’m calling “beyond cat III” is for that purpose alone….to make you squirm while your senses are assaulted with nasty shots of potato soup upchuckings. The sex is boring and unneeded which serves only to reaffirm that this lady likes to eat anything (several times for that matter). You have to wonder what sub genre of our culture this appeals to (rather than the obligary posted review, such as this) 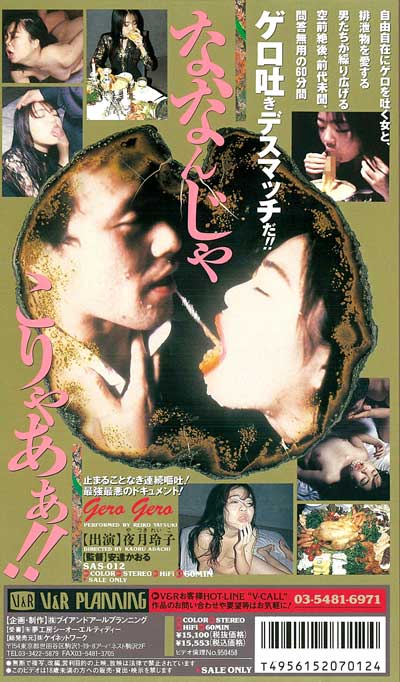 In summary, if you find yourself having to “check this one out”, you are best advised to do so away from dinner time or any kind of food intake, as it really is designed to make you sick to your stomach.