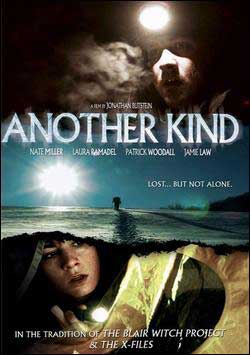 A group of friends find themselves at the mercy of the elements and mysterious unseen forces while spending a weekend camping in the Catskill Mountains.

ANOTHER KIND is a good, solid thriller from writer-director Jonathan Blitstein that combines familiar elements from of a number of genres but manages to add something new into the mix.

Four friends have decided to escape their city lives and spend a weekend hiking and camping in the Catskill Mountains. They are planning to visit the Himalayas and believe that toughing it out in a harsh but familiar environment will serve as good preparation for their overseas trip. It’s worth considering these personalities at length because there are no other characters in this movie.

Nominal leader of the group is Pat (Patrick Woodall), one of those annoying types who are long on enthusiasm, energy and endeavour but often short on sympathy and consideration. His best friend Nate (Nate Miller) is more the kind of guy who is up for adventures in theory but finds the practice less than entertaining. Both are taking their girlfriends with them. Pat’s girl Jamie (Jamie Law) is very much a city girl who doesn’t show much aptitude for outdoors pursuits but is loyal to her man. Nate’s girl Laura (Laura Ramadei) is a down to earth young woman who is good natured but doesn’t suffer fools gladly.

They’ve barely made their way out of the car park at the trailhead before Pat and Jamie have the mother of all rows which ends with her storming back to the car, with the intention of checking into a hotel and picking her friends up in a couple of days. At the same time, Pat reveals he hasn’t brought a map with him on the basis that he knows these trails like the back of his hand. Understandably, Nate and Laura are less than impressed because they – like the audience – have intuited that this is A Very Bad Idea. It’s a little manipulative on the director’s part, to deny his characters potential routes out of any predicament they might soon find themselves in, but no predicament no movie so I think it can be overlooked.

At the end of the first day’s hike, the now trio of mildly unhappy campers pitch their tent. They all sleep in the same one (and it’s pretty cramped just with three; it’s not explained how Jamie would have fitted in) and during the night they are all woken by strange sounds and even stranger coloured lights passing overhead. Sleepily investigating they find nothing amiss and go back to bed. Still feeling unnerved by their nocturnal experience, they decide to put as much ground between them and their campsite as possible. All goes well and they even enjoy an afternoon’s sledding before A Very Bad Thing happens… I can’t say too much more without revealing some of the plot’s more important details but suffice it to say – and you’d have guessed this anyway – things go from bad to worse.

ANOTHER KIND can be best described as cross between those ‘man vs nature’ movies that are quite popular at the moment (such as FROZEN, THE CANYON and even, at a push, THE GREY) and those sci-fi movies where something weird intrudes on a familiar situation (like the dreadful THE CORRIDOR). It also owes quite a debt to THE BLAIR WITCH PROJECT (but then so many of today’s horrors do) although thankfully it eschews the overused ‘found footage’ gimmick. What it does well though is play some quite skilful games with your expectations because you’re never entirely sure whether the greatest threat comes from the unforgiving environment, the unexplained lights at night, or even from within the group itself. To Blitstein’s credit he keeps this suspense going right until literally the very last frame.

So, as I say, ANOTHER KIND is a very solid effort: not outstanding and not particularly original but executed with enough skill and flair to make it an intriguing and compelling watch. Recommended.