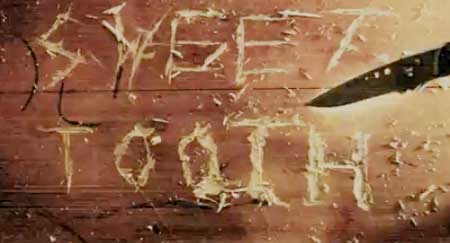 I’m going to start by saying that I really loved how the credits were adjusted to properly fit the horror ‘theme’, stating that it was ‘shot, chopped and screwed by Andy Schmidt and Sam De Angelis’. This was a simple but effective move, and I’m actually surprised that I haven’t seen it done before. The cinematography was good and I was pleased to see that the same old shots weren’t re-used but that the filmmakers actually tried to do something a bit different. Also, there was one moment where a split-screen was used and, although at first I was sceptical, I think this worked wonderfully well. It is an excellent tool to shoot two separate perspectives and show them simultaneously. This gave Sweet Tooth a tense atmosphere relatively early on and definitely keeps the viewers eyes glued to the screen!

The title ‘Sweet Tooth’ (despite the fact that I’ve watched the whole film), remains something of a mystery for me, to be honest. It didn’t seem to relate to the story at all, apart from the fact that it ended with some children knocking on the door for ‘trick or treat’. Then I began to feel like the story itself was lacking, that there wasn’t really much development, but I suppose this is always the hardest part when making a short film. There has to be a balance between the character development as well as the actual horror, because otherwise the audience has no attachment to any of the characters. (Think about how Saw is absurdly gruesome, yet you can watch it with little worry about what’s happening to the poor characters!).

The film begins with a man carrying a girl (wearing white – the universal symbol of innocence and purity) over his shoulder into a creepy basement, where we are fairly sure he is going to be up to no good. As he sets about getting his ‘tools’, she awakens and tries to flee the place in terror. It’s not a plot that horror fans are unfamiliar with. In fact, it has to be one of the most common storylines there is (due, perhaps, to the fact that it requires just two actors and no tricky CGI work). I do believe that Sweet Tooth has some promise, and there are definitely more good points than bad!

On the plus side, there is a nice dose of blood in Sweet Tooth (realistic looking blood at that, not the cheap ‘bright red’ paint that a lot of low budget films settle on). I wouldn’t say that Sweet Tooth is an especially violent short film (although perhaps I’ve become a bit de-sensitized to that kind of stuff!), but there is a rather dramatic climax. A comment I will make though, is that I’m curious about how quiet everyone is. I understand when you’re hiding from a ‘bay guy’ that you want to keep a low profile, but otherwise I would be screaming my head off. Even whilst being stabbed, there are no sounds made, which I do unfortunately find just a little unrealistic.