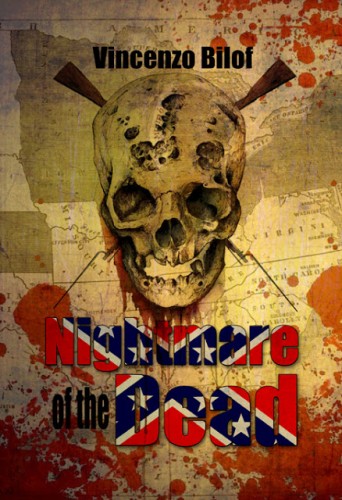 Nightmare of the Dead is a riveting tale surrounding Neasa, a gun-toting, hard edged, outlas who has lost her memory. Vicenzo Bilof does a superb job of making you feel Neasa’s desperation and courage in a world that has become foreign to her. This is both a horror and psychological thriller that readers will find hard to put down.

You, the reader, are willingly led into a beautiful landscape wrapped in a nightmare. The images of saloons and war are brought to life masterfully. As Neasa encounters familiar faces with unfamiliar names, Neasa’s journey becomes your own. Her confusion becomes your own.

The development of the supporting characters is superb as well. Vicenzo provides a villain who is as evil as the worst nightmare you’ve ever had.

Dr. Lynch is both maniacal and diabolical in his plan to destroy Neasa. His conscience doesn’t exist. The world doesn’t exist except as a means for him to excel and to please The Collection.

The Collection is a secret powerful organization bent on world domination and Dr. Lynch is more than happy to help.

His relentless pursuit of the perfect “weapon” is at once both sadistic and disgusting. Unsuspecting soldiers are turned into bloodthirsty, mindless, lethal, unstoppable creatures.

The transformation is one of pure horror. Once the ‘gas’ has been administered, the person is powerless to stop it. The skin and organs are instantly liquefied and the bloodlust is instant.

Neasa’s confusion grows as she encounters more outlaws that tease both the reader and Neasa with delicious morsels of memories from her past.

Why was her memory erased? Who is Neasa Bannan?

Is she the cruel, unfeeling woman that has killed many and struck fear in the hearts of outlaws everywhere? Or was she more complicated than that?

Ambala, another gun slinging outlaw, provides a glimpse into Neasa’s spirit. Providing Neasa with a glimpse of what her world could be with a kindred spirit. Shattering the gunslinger’s hardened outer shell.

The women ultimately band together to stop Dr. Lynch and The Collective from destroying mankind. But along the way, Ambala teaches Neasa to do something Neasa has never been able to do nor had the inclination to feel: Love.

But their relationship is one of mutual admiration as well. Ambala has a warrior spirit that Neasa can’t help but identify with. Neasa’s unflinching courage and no nonsense attitude intrigues Ambala.

Together they will hunt Dr. Lynch.

Their bond will be tested in the most horrifying way. Neasa will come face to face with her love for Ambala while also feeling an almost unbearable pain.

Another character that holds the keys to Neasa’s past is a former comrade, Santiago. Towering in stature and emotionally void, he is shocked and dismayed at the transformation Neasa has gone through.

He is also a willing pawn in Dr. Lynch’s sick game.

Lionel McPhee rounds out the list of memorable characters. He is a despicable man with no conscience. He has no loyalty to any side. The only person that matters to McPhee is McPhee.

But there is one thing he longs for, importance. He is a small man amongst giants. A nobody in the midst of legends. Only his greed exceeds his ego.

But ultimately it is Neasa who must learn to trust her instincts and allow her past and present to merge instead of collide. Her mission is clear, but her journey has just begun……

Secrets will be revealed, truths told, alliances broken. Neasa Bannan must find Dr. Lynch and his henchmen before he is able to unleash his monsters upon the world.

Neasa’s instincts will be tested as she finds out the truth about Dr. Lynch and his plans for her.

The ending will leave you breathless and begging for more. I encourage anyone who is into mystery/thrillers and horror to pick up this gem.