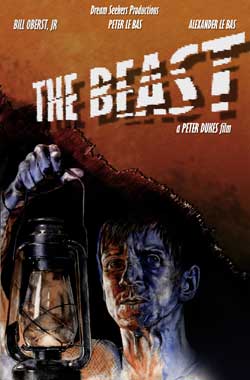 THE BEAST is a short horror film about the internal struggle that a father faces when his young boy is afflicted with the curse of the werewolf.

Saying that this is simply another werewolf movie doesn’t do The Beast any justice whatsoever. Yes, the main premise is very closely tied with the concept of a werewolf, but this short film focuses more on a father’s moral dilemma. Should you kill your son because he’s a werewolf? It’s a tricky one, and that, together with three fantastic performances from the cast make this an incredibly gripping viewing experience. The boy who played the werewolf (Alexander Le Bas, who’s actually the son of Peter Le Bas, who plays Douglas in The Beast) really did manage to creep me out, giving the whole transformation a nice, fresh take. And Bill Oberst Jr is definitely the glue that holds it all together, with his captivating gaze and tormented expressions. Well worth a watch, I’d say, and will only take around 12 minutes of your time – perfect for taking a little break between chores!

The score is also superb and reminds me of good, old fashioned ‘traditional’ scary music – definitely a nice surprise, considering the scale of the production. A lot of credit has to go to that music because it really did work wonders at creating an atmosphere. Maybe some of the dialogue was a tad quiet but this isn’t really a major issue, besides, it’s late at night, the characters are hardly going to be shouting their heads off. The intense debates and anxious conversations were all well written, helping to create the thought-provoking dilemma that the main characters found themselves in.

Written, directed and produced by Peter Dukes, I am definitely eager to check out his other works, as I’ve noticed that he has been associated with a fair few other projects. It is really apparent the sheer hard work that has gone into The Beast, so much praise should come his way for this film – as well as the actors, of course, for bringing the story to life! I genuinely couldn’t tell what the outcome was going to be and when we hear that haunting (but inevitable) gunshot at the end, it really could have gone in any direction. It is not until the last scene that the fate’s of everyone involved is revealed, a bitter sweet finish to such a tricky situation.

I suppose my only real criticism of this film is the fact that the audience never gets a proper look at the werewolf – just a long shot and then close ups of the eyes. What a tease! Part of me respects that choice as I am aware that the budget probably couldn’t stretch to make an awesome looking werewolf, but that horror-fanatic inside me was desperate for a proper look. Pretty please! This means that you largely have to rely on your imagination for the werewolf, which I suppose, in some ways, is much more scary.

The Beast is a powerful little film, and although, as far as action and violence is concerned, there is none to be found, it offers instead some food for thought, which is equally as important. Who would have thought it possible, an intellectual werewolf film! Now I’ve seen everything. I’d definitely recommend this as one to look out for.