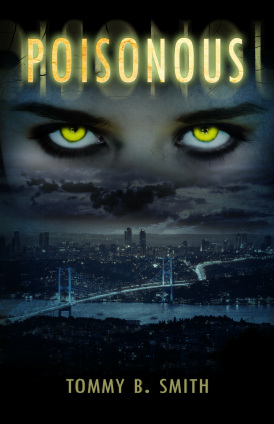 Poisonous, the latest novella by Tommy B. Smith is a rarity of its format.  Where I’d always believed novellas should have an economy of storytelling, and a propulsive quality to the writing, making the story readable in one or two sittings – think of the collection Different Seasons, by Stephen King, and how easily digestible it is – Mr. Smith has turned my expectations on its head.  Instead of a crafting a quick, dirty little story that demanded instant consumption, he’s put together a mighty slog, the kind of thing that took me nearly three months to get through, simply because I couldn’t stand reading it.

In essence, it’s the first novella I’ve ever know that demanded not to be read.

As a reviewer, one of the greatest parts of the work is receiving a package in the mail that I open with hopeful anticipation that I might be holding in my hands a wonderful, undiscovered gem.  That thanks to blind luck, I’ve been chosen to expose this gem, unearth it and lift it up to the light and champion it for all the world to see.  Sadly, that hasn’t actually happened yet because usually the resulting contents are completely underwhelming.  Some are middling, at best, but just as often, the contents are sub-underwhelming.

In a nutshell, Poisonous is the story of Lilac Chambers, a girl who is unwittingly the host of a parasite that renders her ‘living poison’.  In other words, it makes her evil.  What’s the purpose of her evil?  To have bring about a cleansing, whereby the earth will be spared the destruction of mankind.   Or something like that.

I’d love to be more complete with the plot, getting into the details of the characters, maybe exploring the subtext to the prose, but there’s no point.  The characters are little more than thinly sketched caricatures, and as for subtext – it doesn’t exist.

On the whole, the plot of the novella is preposterous, but I don’t hold that against it – most horror fiction is completely preposterous when held up to the light of rational thought.  More damning, though, is the writing is hopelessly clunky and could have benefitted from the services of a good copy editor – after all, just because this is genre fiction doesn’t mean the writing has to be artless, or pedestrian.

And where the writing is not pedestrian, it’s tedious and obvious, regularly violating the maxim that good storytelling is in showing, not telling.  Every motivation of every character is spelled out in excruciating detail, with plot-points and back-story related through lengthy monologues that sound less like the way people actually talk, and more the way people would talk if they spent all their time speechifying in clichés at one another.  My favorite passage – if you can call this a ‘favorite’ – occurs when Lilac meets up with Dan, a performer at a circus and after she asks him why he joined the circus he says:

“I was a nobody before I joined the circus,” Dan said.  “Just a two-but magician with a few tricks up his sleeve.  John Sutterfield took me on board with the circus and showed me to the crowds.  If not for him, I would still be Dan Andrews, the little guy nobody ever heard of or cared about.  How about you, Lilac?  What made you want to join the circus?”

You shouldn’t be surprised she responds with the same, tired, speechifying.  Or that the novel is concludes with the greatest of clichés: the grand villainous monologue, delivered by a man in clown makeup.

Perhaps if the characters were a little more likeable that might help the story, but sadly, they are not.  Not only are they not likeable, they are not relatable.  Rather, they are little more than cardboard cutouts being pushed through the paces of the plot.  To my mind, horror is only truly horrifying when it’s visited upon something or somebody we care about – think about Rosemary in Rosemary’s Baby – but I couldn’t care about anybody in this story.  That, to me, is a fatal flaw.

In short, at barely 110 pages Poisonous seems endless.  It’s boring, lacks narrative drive and in this reviewers humble opinion should be avoided just like, well, poison.