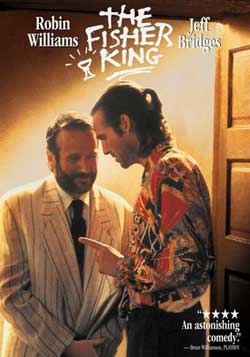 A former radio DJ, suicidally despondent because of a terrible mistake he made, finds redemption in helping a deranged homeless man who was an unwitting victim of that mistake.

Every now and then a great film comes along that is worth mentioning. Director Terry Gilliam, was about to introduce one of his greatest creations that while still ladled with some of his trademark stylings, would be a commercial success AND one of “his” greatest contributions to film. The film to be was a 1991 movie titled “The Fisher King“. Combining a hybrid genre crossover which included fantasy, drama, action, comedy and even a small slice of horror (at one point), The Fisher King would also become a much heralded cult film for its time. 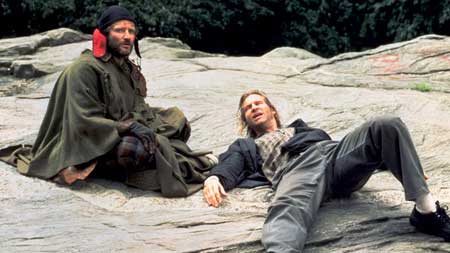 “The Fisher King” featured the primary talents of 2 top name actors, Robin Williams and Jeff Bridges. Jeff Bridges was dynamic as ever playing the role of a well known talk radio DJ star, Jack Lucas, who pushes the envelope daily with his on-the-air rants. Jack is also on the verge of breaking into the sitcom arena with a new role offered being offered (aka film’s trademark dialog of “Well Forgive Me!!)

His arrogance and perisonality were one in the same positioned in a place of an elite’s perspective that would shatter over the course of one fatefully day. It is from this first act that we experience Jack climbing the throes of the world into potential superstardom only to be pulled back into dismay and despair over a fateful broadcast that influenced one man (Edwin Malnick (Christian Clemenson) ), a disturbed listener, to open fire upon a local Manhattan yuppie bar named Babbitts. 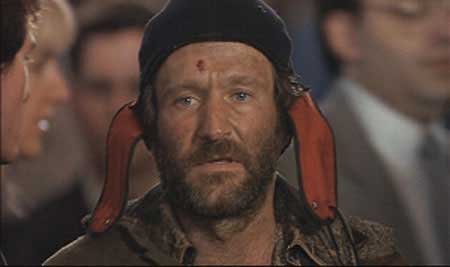 The incident pushes forward 3 years from that date as Jack is now living in less impressive accommodations with his new girlfriend Anne Napolitano (Mercedes Ruehl). Long gone are the days of fame and arrogance replaced with a daily drinking binge and the inability to survive on his own. Anne runs a local video store (“Video Spot”), taking care of Jack as he tries to rebuild his life. While that could be a story on its own, it’s really the introduction of Parry (Robin Williams) (who rescues Jack from an attempted suicide) that fuels this tale.

Parry, a homeless man dreams of acquiring the “Holy Grail” from a wealthy billionaire who was featured in a trade magazine. Parry (name is short for Parsifal, the “pure fool..aka liner notes) suffers from hallucinatory delusions that have him running from a “Red Knight” who constantly threatens his psyche. Jack soon discovers in a early reveal that Parry is “in fact” the former husband to a woman who was murdered in the fateful shootout 3 years ago. 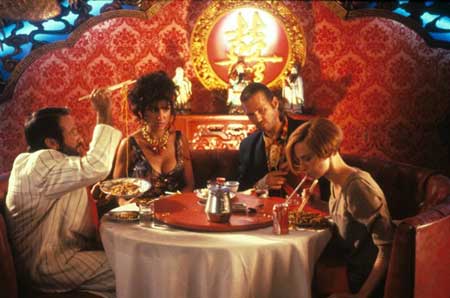 The incident left a mental scar that traumatized Parry from being a college professor into the vagrant he is now. Jack upon discovering this feels that to regain his life back he must do something incredible for Parry as an act of repayment. This sparks a friendship and a crossover between lives that demonstrates how things can sometimes come full circle in the course of fate and destiny. Jack decides that he will also help Parry to hook up with the woman of his dreams who Parry has been following day after day.

The Fisher King takes a hard look at the characters and personalities of those who live among the streets and reside within the local mental hospitals. While we learn that many suffer from mental issues, we also learn that not all began with the same handicaps. 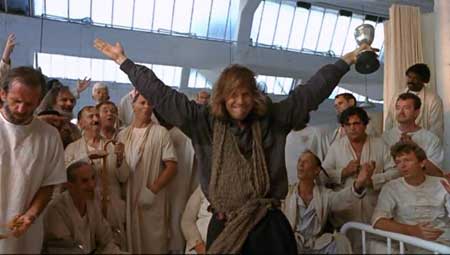 The movie would explore the path of redemption flavored with fantastical elements along the way and the skewed views of the homeless and mentally challenged. It is not only a look from the top down but from the eyes of the tragic who suffered tragedies along the way prompting them into losing all, to live among the desolate and distraught. We experience a flip flop in viewer perspective that does a fantastic job at changing our viewpoints about the world and the lives of the characters. Jack as a center point is forced to face his true feelings about those around him and how he has treated others in the past. Despite all that drama, the film is quite funny at times. 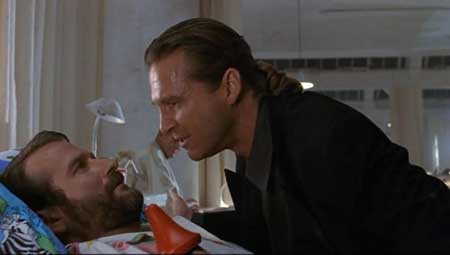 Terry Gilliam created a marvelous tale that roots itself into the short story of “The Fisher King“. The movie take a a modern look at the world while also sending a message about how life evolves and effects the lives of others. Its fantastical elements are kept low key enough to create an ambience of more commercial appeal than others from the Terry Gilliam invention. Still…. scenes such as the Grand Central Station waltz and the symbolism of the red knight would keep us informed that it “is” a Gilliam experience. The movie is simply summarized as an all around “feel good” movie rich with humanity and award-winning acting. Highly recommended as one of the best Gilliam films, “The Fisher King is one of the all time great cinema offerings. Rich with comedic appeal, fantasy favoring and heartbreak encounters, this is simply a film to see.