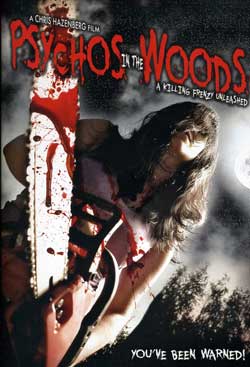 A motley group of friends go camping in a remote forest where people have been disappearing for several years. What starts as an innocent weekend of fun turns into an ordeal of backwoods terror as a group of psychotic wood-dwellers starts stalking the friends. Capture leads to torture and mayhem, and the friends are killed off one by one. It all leads to a final confrontation between the sole survivor and the deadliest wood-dwelling psycho of all

There are more and more small, independent films being produced each year and everyone involved should be applauded for taking the initiative and getting involved in the film industry. With an estimated budget of just $2500 Psychos In The Woods is at the lower end of even this budget driven market but should it, and other similarly financially restricted productions, be judged any differently than a Hollywood blockbuster with millions to spend?

Psychos In The Woods opens with a man shouting into his mobile phone having an argument with an estate agent. When the man begins to chop down a nearby tree with a chainsaw he is attacked by a person or persons unknown and killed. We then meet three friends Goose, Mandy and Bobby on their way to a party to drink, smoke drugs and listen to rock music. After the party our motley group plan to head out to a local area known as Mosquito River to camp as they have heard rumours that the woods are haunted. The morning after the party they wake up in the car park of a roadside diner and decide to have breakfast before setting off. After their food is served the locals regale them with tales of missing, and presumed dead, spouses, children and friends who travelled up to Mosquito River and warn them not go. When Goose, the obnoxiously loud member of the group, says they still plan to go they are virtually thrown out of the diner but before they can set off they are warned again by the local sheriff.

A little later when they arrive at the campsite they meet up with some other friends from the previous night’s party, one of whom inexplicably has a bass guitar with him at all times. Following an uncomfortable night sharing the one tent they have it is then that matters take a turn for the worse!

The first thing to say about Psychos In The Woods is that it is terrible. Not terrible in an amusing, knowing, “laugh at itself” way, but in an appallingly terrible way.

To start with the plot is disjointed and the script is very weak. I suspect that writer and director Chris Hazenberg has tried to coax some spontaneity and ad-libbing from the cast but this has just created a confused mess. The story doesn’t flow and the characters come out with lines from time to time that just don’t fit with what they have said before; as if they are speaking just because they have been prompted to do so. There are some serious issues with the characters too. It is difficult to imagine any of them actually being friends in the first place and as the film progressed I found myself disliking each one more and more. There is not one character that the audience can empathise with and as a result you just don’t care what happens to them. In the end this may not be such a bad thing as some seem to just disappear from the story without explanation. When the “psychos” do finally turn up they prove to be a disappointment as they are neither psychotic nor frightening which given the title is something of an issue.

It must also be said that the direction is problematic. The picture at times is blurry making it hard to see what is going on and on more than one occasion a character is stood in front of the camera preventing the audience from seeing anything at all. The camera angles used add to the confusion and the constant shakiness leaves the viewer feeling nauseated when I imagine it is there to create suspense.

I think overall though the main problem I have with the film is that it is just not scary. For a horror film, especially with the title of Psychos In The Woods, there is nothing here to make even the most nervous of viewers cower behind the sofa. There is no gore, no suspense, no “boo” scares…..nothing that you would expect from even the tamest of horror films. Ultimately all films must be judged by the same standards and unfortunately, and I say this with genuine regret, Psychos In The Woods just doesn’t work on any level.