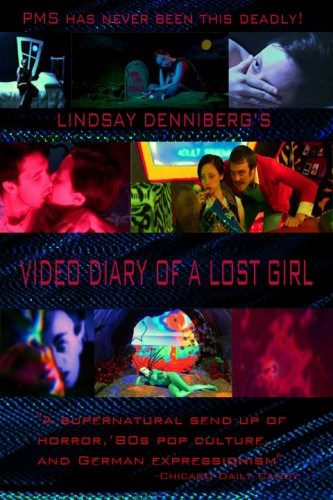 A rock and roll horror fantasy where we meet the immortal Louise and her beloved Charlie. Unfortunately, due to Louise’s supernatural origins, every man she sleeps with must die! Charlie was Louise’s first love from the 1920’s, who she accidentally killed before realizing what she is: a descendant of Lilith, the mother of all demons! This race of women must feed on the souls of men once every full moon, or else they will menstruate to death. Now a hundred years later, Charlie returns reincarnated, and Louise must struggle with staying away from the love of her life, or risk losing him a second time! PMS has never been this deadly!

Whilst the budget for this film was fairly miniscule, the visuals that are used throughout are truly remarkable. The psychedelic, crazily colourful artwork could even be compared to the sets used in The Cabinet of Dr Caligari (which is definitely a compliment!), and influences can also be seen from the likes of David Lynch, Guy Maddin and David Cronenberg, in the respect that the entire film has a abstract, dream-like quality to it. The director herself, Lindsay Denniberg, describes Video Diary of a Lost Girl as ‘epic, absurd, romantic and horrifying’ – what more could you want from a film? She says that it is a ‘fantasical mash up of genres you have never seen’ which will ‘explore the underbelly of feminist issues that normally don’t get touched on in most films’. This is a bold project, undertaken by complete unknowns, but I reckon that it was exceedingly well done, and any movie lover would do well to check this one out. 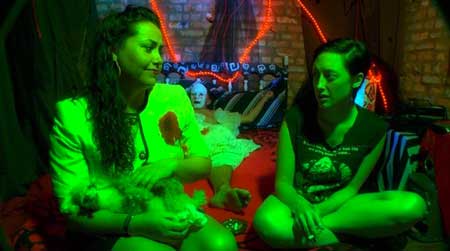 I love how Video Diary of a Lost Girl pays homage to so many horror films (which are too numerous to mention in this review), making it a delight to watch for any hardcore movie lovers out there! It is always good when a director is passionate about films and shows their passion in the films that they make, because it really is contagious. Although there are a great deal of references to classic horror films throughout, I’m slightly hesitant about calling Video Diary of a Lost Girl a horror movie – the comedy element is much more prominent, and even the romance is a stronger theme than horror. This is not at all a criticism, in fact, I admire films which challenge ‘conventional’ genre stereotypes, and this film manages to do that with ease. 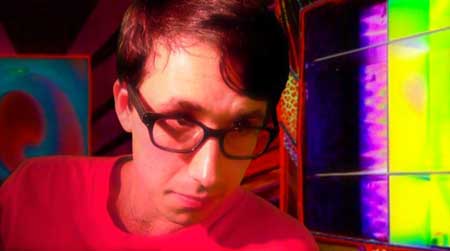 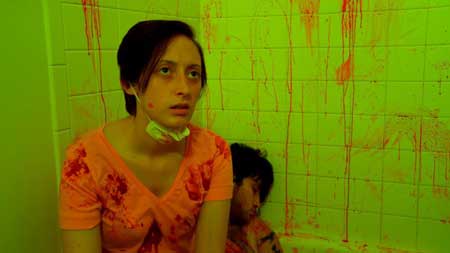 Video Diary of a Lost Girl tells the story of a group of women (called the ‘Lilin’) who are immortal and must have sex once a month (instead of menstruation) or they will die. Sounds do-able doesn’t it? But there’s a catch – the men that they have sex with will die! Whilst some women would surely jump at the chance to have monthly, ‘killer’ sex instead of a period, Louise, (who has been kicking around since the 1920s), struggles to deal with her tricky dilemma. This is exacerbated when she bumps into Charlie, who is a reincarnation of her first love, Charlie, (and first kill, as she did not at first realise that she was a ‘Lilan’). Louise is now faced with the awkward situation of trying to keep her distance from Charlie in order to save his life, and the film explores the nature of love and deceit in a clever and innovative way. I even looked up the mythology surrounding ‘Lillith’ and her part in the Garden of Eden story as it was something that I had never heard before. I think that it’s good that the film has been based on something and not simply made up out of thin air. 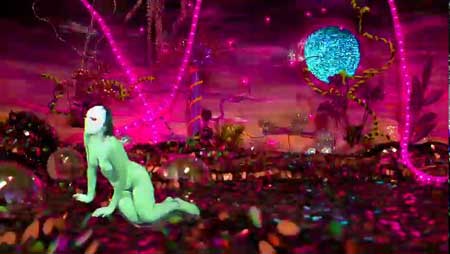 The basic plotline actually reminds me a little bit of Claire Denis’ film Trouble Every Day, where two of the main characters suffer with a strange kind of medical affliction which, for some reason, makes people get a little too ‘carried away’ whilst having sex, let’s call it – leading to them killing their unlucky partners. Whereas Trouble Every Day is much more horrific and serious about this bizarre issue, Video Diary of a Lost Girl mixes in some more light hearted features so that the overall tone of the film is a much more positive one. The interesting connection that is drawn together between love and loss in both films make for a gripping experience, placing the viewer in the same unfortunate position that the main character is in. 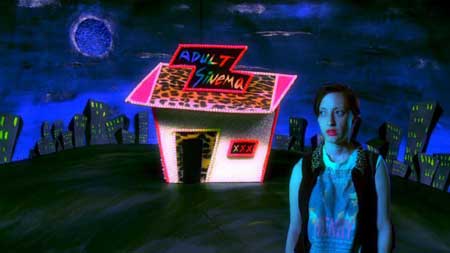 Despite the fact that Video Diary of a Lost Girl is totally different from the films I usually go for, I actually really enjoyed this one, which is a testament to the enthusiasm that went into making it. There’s something quirky yet charming about the humour used that I couldn’t help but find endearing. It’s an odd little film (no doubt about that), but that is somehow the beauty of it. Ultimately, it is a love story with some blood and killings thrown in to add slightly higher stakes to it. The visuals used played a lot with colour to create mood, with striking reds, blues and greens giving the film a definite style. The old school techniques used took me happily back to the nineties (especially considering that Louise works in a video store!). 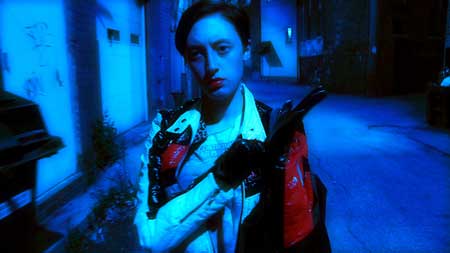 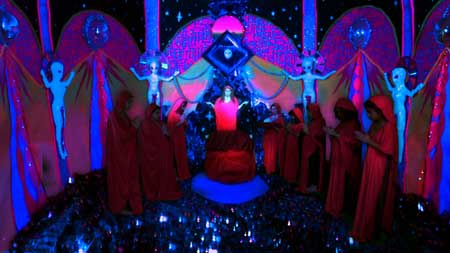 It appears to have taken the independent American film scene by storm since its world premiere at the Chicago Underground Film Festival (where it won the Audience Award). Video Diary of a Lost Girl has gone on to play a whole bunch of other festivals, as well as winning lots more awards (such as taking home five awards from the Dark Carnival Film Festival – Best Feature, Best Actress (Priscilla McEver), Best Actor (Chris Shields), Best Director and Best Visual Effects). I think that the film is totally deserving of all of this attention and I very much look forward to any of Lindsay Denniberg’s future works.

It’s safe to say that Video Diary of a Lost Girl is more than just a film, it’s a work of art! 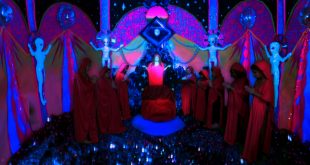