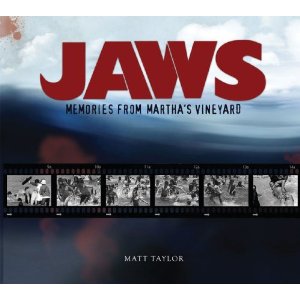 This impressive coffee table book is essentially the definitive guide to the making of the blockbuster film Jaws. Loaded with stories, pictures, and priceless memories from the people who worked on the film, this is one book that no Jaws fan can do without.

When I was a little kid I was totally and utterly fascinated with Jaws. I didn’t get to see the original film when it was playing in cinemas across the country, but I was lucky enough to see Jaws 2 at the local drive-in movie theater at the ripe old age of four (it was the first film I ever saw at the drive-in and to this day I still have the ticket stub from it that my father gave to me later on that night after we got home). As long as I can remember I have loved sharks and have had an obsession with them, thanks mainly in part because of the Jaws movies. I’ll admit that the later ones were pretty shitty, but I always dug the first two films. I was very happy to get my hands on the Jaws-Memories from Martha’s Vineyard book, and think that it is without a doubt a very awesome piece of Jaws memorabilia.

This book has a little bit of everything that will make even the most casual of Jaws fans happy. If you are a hardcore fan of the movie then I think that you will piss your pants with excitement once you start looking through it, and some people out there who live, breathe, eat, and sleep Jaws may even experience an orgasm or two after sitting down with it. Believe me when I say that it is that impressive. In addition to countless interesting anecdotes from the cast and crew we get a ton of pictures taken from different times during the film’s production. I really dug the early story boards that are included as well as the shots of “Bruce(the shark, for those of you out there who didn’t know what it was called during filming)” as it was being constructed. While the shark may not look as impressive by today’s standards I still think that there is just something pretty damn intimidating about it, so I was happy to get to see pictures of it being put together (too bad it didn’t work most of the time).

Cool items such as newspaper clippings about the film, copies of telegrams that state that the shark should be in working condition, pages from the actual screenplay, and early set photos are also included in this book. There are also some interviews with several members of the cast and crew, including Jeffrey Voorhees (any relation to Jason?), who played the poor, unfortunate young Alex Kintner- who ends up becoming a snack for our hungry shark pal early on- and Jonathan Filley, whose character was lucky enough to be too drunk to join his female companion in a late night swim during the opening of the movie (in case you haven’t seen the movie things don’t turn out so well for her). There is even a section devoted to talking about Pipit the dog that I thought was quite interesting. After hearing big names like Spielberg and Dreyfuss tell the same old stories over and over again about their experiences making the film it was nice to finally see lesser-known people involved with the movie get to share their stories.

Jaws-Memories of Martha’s Vineyard is loaded with goodies, and I haven’t even scratched the surface when it comes to the awesome and interesting things that await readers. I was pretty blown away and thoroughly entertained while I was reading it, and I am pretty sure that anyone who picks up a copy will feel the same way. If you know someone who is totally and completely into Jaws who doesn’t have this book then I suggest you get it for them for Christmas as it makes the ultimate Jaws-related gift. Highly recommended!