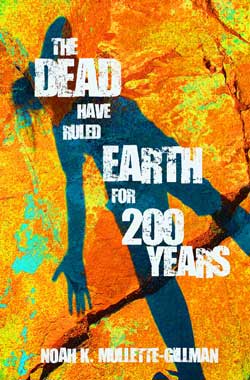 Let me start off by saying that I am a zombie purist. I do not like fast zombies, I do not like zombies that talk, and I do not like zombies that slowly begin to evolve and think. I like my zombies like very dumb dogs. And I like the humans they eat even dumber, aka: Roger from the 1978 classic Dawn of the Dead. The humans in Romero’s classic meet their demise because they do stupid things and the zombies are just there to pick up the pieces, so to speak. That, I believe, is the essence of what a good zombie story should entail. Let the humans screw up and become fodder for the living dead.

Mr. Mullette-Gillman seems to appreciate that idea because he sends three people from their new digs in space down to a decimated, zombie plagued, crippled (Paleo) Earth to search for some new DNA. The problem is that one of our travelers is an idiot. The story begins with our three explorers, Dix, Anya, and Greg plummeting to Earth in these super bad-ass space suits. The suits seem to contain enough firepower to give Iron Man a run for his money. Turrets, manual and automatic, sweep their landing area, or any area for that matter, clear of the undead.

This is where Mr. Mullette-Gillman begins to change our previous thoughts of the undead. While this story is very much a stranger in a strange land scenario for our heroes these are not your grandfathers re-animated dead; they are humans that have been infected by a lab-born virus. The virus, we find out a little later, was designed to cure cancer and since cancer cells are apparently immortal and the body is not, the geniuses that invented the cure decided to make the bodies of the living immortal as well. Now here is the rub; the pieces of the re-animated bodies will, over time, seek each other out, rebuilding into these weird and often grotesque monstrosities. We are treated at the beginning of our tale to a creature that bursts through the street that is supporting three torsos, childlike legs, and a misshapen head with a couple of dozen pink and brown tails growing out of it, reminding me very much of Herbert West and his Bride of Re-Animator tinkering.

After minimal resistance from our giant thing and the other infected, the group decides they are in the wrong place and decide to follow another lead. So back up they go into the landing zone and then dropped again into a very inhospitable Kentucky. The weather is horrible and being from The Mars and The Moon Dix, Anya, and Greg are a little freaked when they land directly in the middle of a torrential electrical storm. By this time we have learned that Dix is the not so smart one and Greg is the brains of the pack. Anya is somewhere in between. The characters are pretty well thought out and we do get enthralled with what the whole purpose of their visit might be.

Following a signal transmitted to their suits the trio heads for a hospital that, strangely, has electricity. After dispatching the infected, Greg and Anya exit the protection of their suits and leave Dix, the not smart one, in charge of holding the perimeter and securing the entrance. And just like a dumb Roger he decides to watch a movie from within the confines of his armor. Well, as we are all expecting, he gets overrun by our nasties and has to flee his suit and head into the hospital. Meanwhile, Greg and Anya head to a cryogenic center within the hospital to get DNA samples but instead awaken Catherine who has been in stathis for two hundred years. Catherine notices that something is a bit fishy. It seems that when Earth was abandoned they did not take with them the deepest of gene pools and everyone up in space is…uh…the same.

I enjoyed this novel very much. It had great pacing and a ton of ripping flesh. The suits that the voyagers wore sounded very cool but it took me about a quarter of the way through to really get a visual in my mind of how large they were or how sophisticated. At first I was thinking they were just heavy armored suits with guns and then maybe they were like the “AMP” suits from Avatar. It just never really formed in my head.

Another small problem I had was with the zombies being able to compound. While this does play a rather large role down the line it just seems like it was something cool and then discarded through most of the story. And then there is the whole DNA thing. I think that Mr. Mullette-Gillman started to write a nasty zombie horror yarn and instead ended up with an effective science fiction story with a new race of dead infected humans.

And did I mention that the dead infected humans have sex and reproduce?  Also, pretty cool.