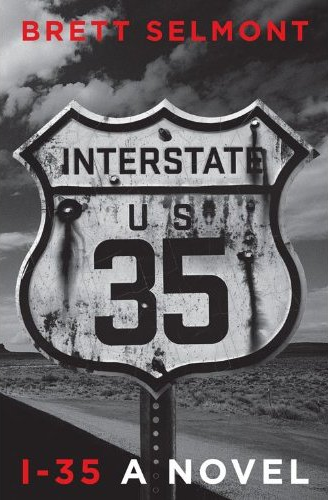 Do you like sex, drugs, and violence? I thought so. In that case you need to check out Brett Selmont’s novel I-35. It is the first of a trilogy entitled The Road Series, book two being Route 66 (already released) and the soon to be released third book entitled I-95 (Christmas 2012).

I-35 is about a twenty-something year old man named David. Readily apparent is that he is addicted to pain pills for migraines which are severe enough that he will have complete blackout sessions and not remember anything. However when the story starts he comes to after another blackout session and realizes not only has it been several days since his last recollection, there is a horrid voicemail from his brother Jim on his phone which can only be taken as if he is in trouble, if not already dead. David also finds out he is 1,500 miles from where he last remembered being.

The question of how he got where he is and what he has done over the last few days burns into his mind. Also by his side is the lovely Shawna, someone who apparently knows him and he knows her, but he has not a single recollection of. Not letting that hinder him, they take to the road in pursuit of Jim and Jim’s wife who were traveling musicians that played in every podunk town along I-35. As they cross state lines they come across a motley assortment of characters and adversaries in every town and bar they stop at trying to find answers; everyone from corrupt doctors and abusive police officers, to shady bar patrons and p*rn movie producers are out to raise David’s confusion and anger levels to their boiling points all while tempting him at every stop.

The entire book is a huge build-up towards the ending, and although it feels like that throughout, there’s enough action going on to keep you reading for the enjoyment of the story and not just because you want to reach the end. Given the length of the book (194 pages) the characters are developed well enough, however Shawna is by far the character you care and sympathize with the most. You are literally shocked when the climax portion of her story becomes revealed and for a time you forgot the novel is about David and not her.

The books journey down I-35 starts in Minneapolis, Minnesota and they travel all the way to Texas, down to Mexico and even down to Hell itself before it ends. That’s quite a journey South and one you are pleased as punch to be along the ride for. If I have any complaints about I-35 it’s about the sex descriptions. Not that sex is any book is wrong per se, but the slight graphicness of the descriptions in I-35 would, in my eyes, make the book inappropriate for those below a certain age whereas the story in itself is not, and I think this book needs to be shared.

Being said, the book is short, has a great storyline, almost cult classic level, is loaded with good word use, and definitely makes you want to get in your car and drive to your own little adventure. I have already started reading book two and am looking forward to it.