SYNOPSIS:
“A crazed killer is on the loose in the catacombs of Venice, Italy. He stalks beautiful women, drags them to his underground lair, kills them, then stuffs them and adds them to his collection.” (courtesy IMDB)

REVIEW:
Prepare to gird your loins as I take you to an underground hell somewhere beneath the beautiful and ancient city of Venice, an extremely popular destination for tourists, some of whom will never be seen again, except by…The Embalmer (1965)! He stalks young ladies, takes them to his lair deep beneath the canals of the city and, as the title suggests, embalms them to preserve their beauty for all eternity. What a nice guy! Also known as The Monster Of Venice, this week’s film was directed by Dino Tavella in 1965 and stars Maureen Brown, Luigi Martocci and the Italian Elvis Presley, all of whom shall be exposed to a flood of action, terror and suspense! So without any further ado, prepare to get stuffed by…The Embalmer!

It seems that some unidentified loony – who gets around the canals in scuba gear and looks very fashionable in his official Nigel Honeybone mask – is creeping about the city, abducting women and taking them to his underground lair beneath the canals. These beautiful girls are laid out on a slab, embalmed and placed on display while the scoundrel chats with them endlessly. It may be more difficult than collecting stamps, but it’s easier on the eye than train-spotting. Shot in austere black-and-white during a time when most Euro-trash exports were exploiting eye-bleeding colour to its full potential, The Embalmer feels more like an old Noir story, somewhat typical ‘giallo’ in its approach. By the way, the term ‘giallo’ is Italian for ‘yellow’ and refers to the origin of the genre as a series of cheap paperback mystery novels that had trademark yellow covers and rapidly yellowing pages. Who says horror films can’t be educational? 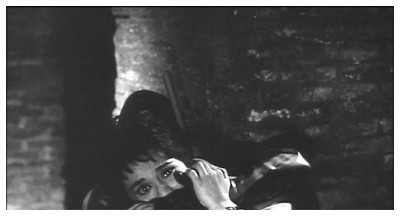 It’s a quirky little movie, made during a respected period in Italian horror and, although not entirely successful, it does have its moments, most of which are in the second half when the killer is given more screen time in his creepy catacombs. The concept of killing people to embalm them was rather shocking for its time, and the camera’s not shy at leering at ladies legs or watching the hotel manager while he watches his more attractive guests through a two-way mirror. Neither writer-director Dino Tavella or his cast have had shining careers, which should give you an idea of the general quality of the writing, direction and performances. Since Dino passed away in 1969, this was only his second and final film, proving once and for all that bad taste can kill. 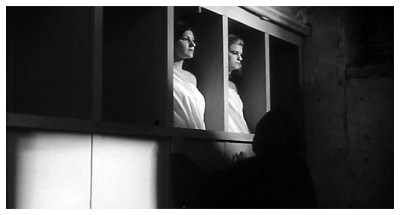 In fact the most experienced member of the cast or crew was the actress Anita Todesco, who crammed more than forty film appearances into a short ten-tear career, in swashbucklers like Morgan The Pirate (1960) and The Giant Of Marathon (1959) starring Steve Reeves, and the occasional science fiction film like Assignment Outer Space (1960) as a Venusian – no, not Venetian, Venusian…as in someone from Venus…no, the planet. Oh, forget it! One other person worthy of mention is co-producer Walter Manley who, between 1959 and 1968, made a career out of adapting foreign language science fiction films for the American market, like The Green Slime (1968), The Snow Devils (1967), Terror Beneath The Sea (1966), Invaders From Space (1965), War Of The Planets (1966), the Super Giant/Starman films Evil Brain From Outer Space (1965), Atomic Rulers (1965) and Attack From Space (1965), not to mention Creation Of The Humanoids (1962), which was remade as Blade Runner (1982). 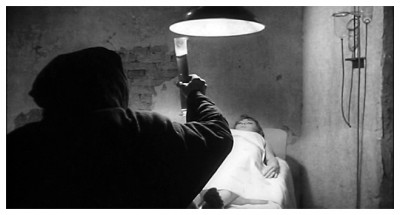 So what’s wrong with The Embalmer, I hear you ask? Cardboard cutout characters, musical numbers by Spaghetti Elvis, and a pair of annoying street workers who pretend to be comic relief. The jazzy music score sounds good but is totally inappropriate, and the dubbing is downright funny – just watch as Maureen keeps repeating herself just to pad out the mouth movements. Plausibility goes right out the window – you simply have to accept the fact that loonies will insist on doing loony things and the so-called detectives couldn’t find their own backsides in a dark room with both hands tied behind their backs.

The Embalmer was originally released on a double-bill with the Michael Reeves horror movie The She-Beast (1966), which I had the joy of inflicting upon you last year. A few years later, in the early seventies, The Embalmer was released again on a triple-bill with the delightfully titled The Corpse Grinders (1971) and The Undertaker And His Pals (1966). Anyway, please join me next week to have your innocence abused to within an inch of its life – again – while I force you to submit to another Public Domain escapee for…Horror News! Toodles!