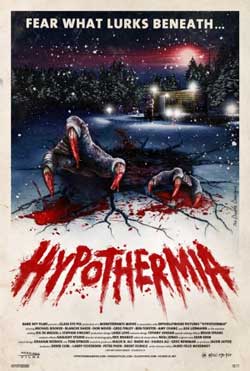 Ray Pelletier just wants to spend a pleasant and relaxing weekend ice fishing with his family. Alas, Ray’s plans are ruined by the unwanted presence of the obnoxious big city father and son duo of Steve Cote and Stevie Jr. However, the two squabbling families are forced to set aside their differences and work together after a vicious monster awakens from the cold waters of the remote frozen lake area they are staying at

The state of hypothermia is defined as “An abnormally low body temperature, often caused by prolonged exposure to cold.” The movie “Hypothermia” has absolutely nothing to do with this condition, other than to perhaps describe the pathology of the amphibious monster living beneath the ice on a frozen Maine lake, or maybe because it’s a pretty cool word. It rolls off the tongue and contains more than two syllables, so one feels intelligent just uttering it.  Said lake is the main setting of the film as well, and serves as a refreshing departure from the usual horror trappings of barren deserts and ominous, seemingly endless woodlands.  It combines the desolate hopelessness of arid barrens with the living, breathing terror a forest at night has to offer.  It reminds me of a great line from a mediocre play I’d seen in the past: “You have to respect nature.  Because nature can kill you!”  So true, especially if you’re an unfortunate character in a creature feature.

“Hypothermia” starts out strong and promising, as it establishes a sparse cast of relative unknowns (save Michael Rooker, ol’ Henry himself) and expertly builds tension between them and their frigid surroundings.  Rooker, always a welcome sight to the genre since his glory days of supporting roles in Oscar bait (“Mississippi Burning”, “JFK”), plays Ray Pelletier, who takes his family on their annual ice fishing excursion.  Why this would be considered a fun activity to anyone other than a third-degree burn victim is a complete mystery to me, but to each his own.  In tow is wife Helen (Blanche Baker), college age son David (Ben Forster), and his reluctant but sporting girlfriend Gina, nicely underplayed by the lovely Amy Chang.  The movie opens with Ray falling through a thin patch  while scouting on the lake, barely being able to pull himself out just as something in the water advances quickly upon his submerged lower half, utilizing the directing cliche I like to refer to as “Monstervision” to see through the murk.  The next morning, the family proceeds onto the obviously unstable ice!  Any rational human being (i.e., not one in a horror flick) would call it a day after Dad almost drowns and enjoy some HBO at the closest hotel, but not this stalwart bunch.  I personally require a cup of cocoa and soothing words from my mommy if I get snow in my shoe, but again, I’m a different breed.

Once lunchtime draws near without so much as a nibble on their lines, the Family Pelletier’s peaceful day is interrupted by the arrival of Steve and son Stevie Cote, portrayed by Danny McBride lookalike Don Wood and Greg Finley.  We can tell these two are jerks out of the gate, given the undeniable facts that they fish from within a cozy, heated trailer, crank their music too loud (though how it could possibly be deemed an inappropriate volume by a group over one hundred yards away is anyone’s guess), and are the first characters in the movie to speak in heavy profanities.  I am all for using another’s wealth and social standing as evidence of douchebaggery, and practice it often in my daily routine, but this is becoming an obvious trend in low-budget films.  The terms “pleasant” and “rich” no longer belong in the same sentence anymore.  In fact, when those of means happen to be the protagonists, they’re often such vile individuals that they serve merely as statistics in the body count.  “Hypothermia” is no exception to this rule of thumb. 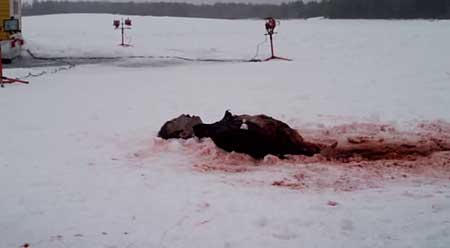 Turns out, the elder Steve, though certainly obnoxious, isn’t so repellent of a guy, and invites the others to the trailer for steaks in lieu of their fruitless day.  Unfortunately, before the festivities are under way, Stevie is pulled down into the hole he is digging (with his electric drill, the pompous rich boy), and is rescued by the others.  Not, however, before he suffers a deep and instantly infected wound on his forearm inflicted by the still unseen beast.  He soon develops a fever and sporadic bouts of Monstervision, which is a red herring plot twist if I’ve ever witnessed one.  Do he and the lake thing suddenly have some sort of psychic connection, or is he transforming into a monster himself?  These questions are never answered or even remotely pursued, making them pointless.  Ray wants to take him to an emergency room for stitches and an examination, but Steve Sr. refuses, declaring that the lad requires only a good night’s rest.  I thought the upper class had health insurance? 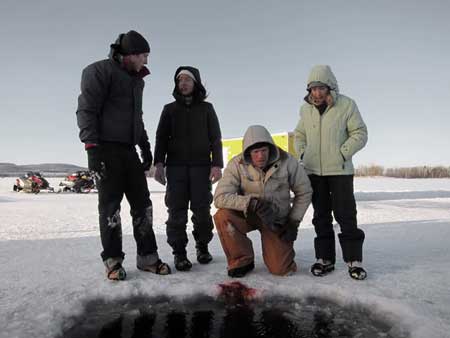 The argument soon becomes moot as the monster returns to finish the job, dragging Stevie off into the night and leaving nought but a thick blood trail.  These are the first glimpses we catch of our slimy villian, and also where “Hypothermia” takes a most adverse deviation.  To use the term “cheesey” to describe the rubber suit worn by the undoubtedly warmest cast member is an insult to the likes of Godzilla, Swamp Thing, and the Creature from the Black Lagoon, a design that is not only reminiscent here, but quite possibly the exact same ensemble with a few tweaks and alterations.  In all honesty, I wouldn’t be shocked if Universal International Pictures had reported their Creature costume stolen mere hours before “Hypothermia” began principal shooting.  It is, beyond a doubt, that inexplicably awful.  Had I believed what I was seeing, I would have laughed out loud. 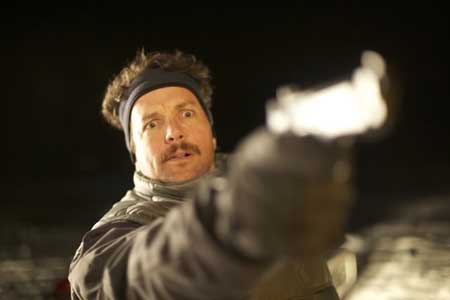 The entire enterprise dissolves into the standard “Who will survive and who will become a late night snack?” fare from that point on.  I will give “Hypothermia” credit for not resorting to jump scares during its descent into silliness, but it still nonetheless loses all semblance of intensity and character drive.  The players, all excellent, must have been so disappointed once they reached page 50 (give or take) of the screenplay.  Director James Felix McKenney, who created a daring low-tech future in 2006’s ambitious “Automatons”, is beginning to look like a former wunderkind instead of a solid filmmaker with each passing endeavor.  He assembles a gifted cast, builds slowly and assuredly against a bleak and beautifully photographed landscape, and then sics a dude in a Halloween costume on everyone.  Don’t even get me started on the finale, which is anticlimatic bordering on inane.  Like my writing career, “Hypothermia” is a shameful waste of potential.