SNEAK PEEK: INSIDE ISSUE #2 OF
THE WALKING DEAD, THE OFFICIAL MAGAZINE 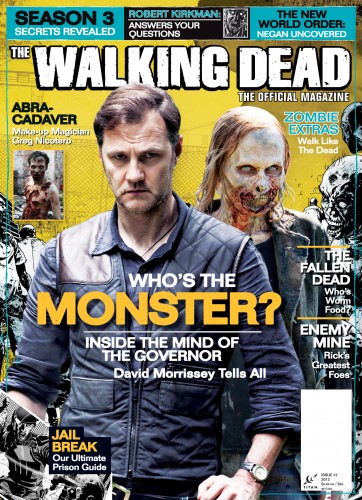 David Morrissey spills the beans on playing The Governor, while Robert Kirkman reveals what to look forward to in the coming weeks

Following the announcement earlier this month that the hotly anticipated first issue of The Walking Dead, The Official Magazine is already one of Diamond’s best selling magazines of all time, Titan Magazines and Skybound reveal what’s inside the upcoming second issue.

Hitting stores on December 18, this 100-page issue dips another toe in the bloody waters of everything The Walking Dead, from the comic to the series and everything in-between: Creator/writer Robert Kirkman answers readers’ questions and reveals what to look forward to in the coming weeks; The Governor himself, David Morrissey, reveals what it’s like to play the villain; we interview make-up/SFX legend and co-executive producer Greg Nicotero; and, in the comics, we profile Rick’s current nemesis, Negan, and pay our respects to those original survivors who are now worm food. We’ll also have all the latest news, reviews and tips for The Walking Dead fans.

This issue comes with a main newsstand cover featuring David Morrissey as ‘The Governor’ and an alternative art cover by The Walking Dead comic artist Charlie Adlard, colored by The Walking Dead colorist Cliff Rathburn. Retailers can order this from the November edition of Diamond PREVIEWS.

Retailers can still order copies of the hit issue #1 from Diamond, who have now extended its ordering deadline due the overwhelming response. Any retailers wishing to order this highly demanded issue, or place a reorder, are urged to do so before the issue #1 release date of October 23.

Fans of the show are urged to join The Walking Dead, The Official Magazine on Twitter and Facebook to keep up to date with exclusive developments and deals, or visit the magazine website and www.Skybound.com, the source for all news on The Walking Dead, Robert Kirkman and all Skybound titles.

The Walking Dead, The Official Magazine issue #2 will be available on newsstands and in comic book stores in the US on December 18, in the UK on December 27 and Australia & New Zealand on Feb 2.

About Robert Kirkman
Robert Kirkman’s success and passionate advocacy for creator-owned comics led him to become the first person invited to become a partner at Image Comics since the company’s inception twenty years ago and he formed his own imprint there, Skybound, in 2010. Kirkman is the creator/writer of the Eisner Award-winning The Walking Dead, long-running Invincible, all-ages Super Dinosaur, The Astounding Wolf-Man, and new title Thief of Thieves, among many others. Kirkman has earned the respect of the comic, writing and television communities and topped the New York Times bestseller list for graphic novels in 2011 and in April 2012, he took the top five spots on both the hardcover and paperback lists. He’s the creator/executive producer and writer of the hit television show, AMC’s The Walking Dead, the highest-rated basic cable drama of all time in the U.S, also an international success in 122 countries and 37 languages. AMC is developing Thief of Thieves as a potential series with Kirkman serving as creator/executive producer and writer. www.Skybound.com is your destination for all news and merchandise for Robert Kirkman, The Walking Dead and all Skybound titles.

Each quarterly 100-page edition also includes the latest revelations from The Walking Dead comic team, including interviews with the creators and features showcasing the creative process behind the art. Plus, The Walking Dead creator and writer/executive producer for the show, Robert Kirkman, reveals the latest news from the set and answers fans’ questions.

Issue #1 will be available on newsstands and in specialty comic book stores in the US from October 23, UK from November 8 and Australia & New Zealand from December 18.

For more information on The Walking Dead, The Official Magazine visit:
titanmagazines.com/t/the-walking-dead/

About Titan Magazines
Titan Magazines is the largest and most experienced publisher of licensed entertainment magazines and comics in the US, Canada, UK, Australia and New Zealand.

About The Walking Dead (TV series)
“The Walking Dead” is the number one drama series in basic cable history for Adults 18-49 and Adults 25-54. Based on the comic book series written by Robert Kirkman, “The Walking Dead” tells the story of the months and years that follow after a zombie apocalypse. It follows a group of survivors, led by police officer Rick Grimes, who travel in search of a safe and secure home. The series, which garnered a 2010 Golden Globe® nomination for Best Television Series – Drama and won the 2011 and 2012 Emmy® Awards for Outstanding Prosthetic Make-Up, stars Andrew Lincoln, Sarah Wayne Callies, Laurie Holden, Norman Reedus, Steven Yeun, Chandler Riggs, Scott Wilson, Lauren Cohan, Danai Gurira and David Morrissey. Season three of “The Walking Dead” is executive produced by showrunner Glen Mazzara, Kirkman, Gale Anne Hurd and David Alpert.