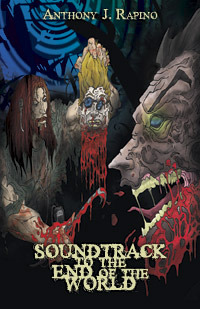 SOUNDTRACK TO THE END OF THE WORLD
Author: Anthony J. Rapino

Judging simply by the title of the book, I had no real clue what I was getting myself into. I knew it was a zombie story but that was all. I have very few zombie books under my belt but a ton of zombie movies so I was expecting what everyone would probably expect; slow moving (or maybe fast), brain eating zombies out to rid of the world of all non-zombies.
Thankfully, that was not what I got.

Anthony J. Rapino delivered a unique twist on both the creation of the zombies as well as the returning of zombies to their human self. To sum it up quickly, “someone”, whether terrorists or the government, are out to send everyone on the out of body experience of their life by broadcasting a special sound wave that allows your soul to separate from your body. Radio, TV, night clubs, just about any source of sound is fair game and you never know where you may be exposed to the noise that will send you off into zombie land. The only way to prevent being turned is with the use of ordinary earplugs. If you are snapped out of your state soon enough the process is reversible but take too long and you will be a zombie forever.

As a bonus to the zombies, once you are one you can turn others into zombies as well. Just your scream alone can do it, no manufactured source of sound is needed at that point. Be quick with the earplugs and your shotgun or be turned.

The story follows two friends, a psychic, a little girl, and the James brothers who band together to find out exactly what is going on. Why are the zombies all walking due North? Who is in charge? Why are some reversible and others not? And why the hell are we being sold as slaves?

Again, not knowing what to expect, I found myself drawn very quickly into the story. I was glad that it was a lazy Sunday afternoon as I was so intrigued, I read the entire book start to finish in one sitting which is a rare feat for me (although at only 264 pages not too impossible for most avid readers).

The story has a ton of humor but a nice difference is that it came from the characters and not humorous or silly events. Also, since these are not your typical zombies there is no excessive gore to take away from the story. Just a band of funny, well dialogued yet frightened survivors trying to figure out what is going on versus run away and hide like everyone else they encounter along the way is. Even the supporting cast of characters are at least memorable and worth a tear or two.

If I had any complaint with the story it would have been with the ending. You read this entire story, with all the twists that come along with it, and right at the end when the climax should build to the finale, it feels like the entire thing ends in barely four pages and then done. No real aftermath, no drawn out ending, nothing spectacular (or satisfying). I would have liked a little more story to the ending and maybe some more explanation on the who and why of it all before you reached the last page.

However that complaint is minor compared to the rest of the book. Soundtrack is a well written story definitely worth a digital read.

Tags Anthony J. Rapino Soundtrack to the End of the World