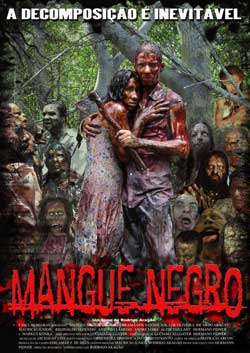 A poor community in the remote state of Espirito Santo, Brazil, ekes an existence by fishing and picking crustaceans from the local tropical mangroves. Their meagre survival gradually becomes threatened by pollution of their waters and the eminent disappearance of the source of their livelihood. Suddenly, from the contaminated muddy dark swamp, zombie-like creatures emerge to attack the community. One by one people are ravaged and killed by the zombie creatures… A frightened timid survivor discovers a swift ability with the machete – but what poor and timid talent as a lover

You may not know it, but Brazilian movie industry goes further than slums and Rio de Janeiro, and has given birth to some remarkable horror movies. Besides Coffin Joe (who has recently made a good intentioned, but overall disappointing comeback with Embodiment of Evil) the country has a new generation of horror dedicated movie makers who, in the last few years, have decided to add some blood and guts in their cinema. In addition to original creations, there’s a small, but quite respectable, tradition in tropical zombie flicks. Petter Baiestorf (also known as Brazilian Jesus Franco) has brought us Zombio in 1999, but it took a while for the massive attack of living dead to arrive. With the release of Era dos Mortos (2007), A Capital dos Mortos (2008) and Beyond the Grave (Porto dos Mortos, 2010) lots of blood has been splattered, and lots of brains have been eaten. But let me tell ya: if you’re going to watch just one zombie movie this year, make it sure it’s Mud Zombies (Mangue Negro, 2008). 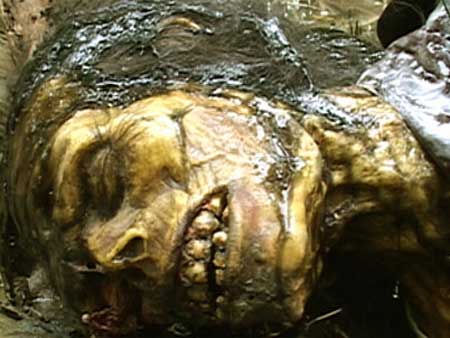 That is not to say that Mud Zombies is the best zombie movie in recent history. But, even if the flick doesn’t delivers everything that it could, it is one those movies that are worthy by what it represents, if not for what it accomplishes. And if you are not too picky, it sure is a beautiful thing to see! Gore galore, great acting, non-stop action, fine humor, excellent effects (by writer/director Rodrigo Aragão himself) and zero pretentiousness. It’s clear from the start that the intention is not to emulate Romero, but more to recreate the tone of Braindead and Evil Dead with a genuine Brazilian touch. In that perspective, they sure get an A+!

The movie takes place in a remote mangrove in Espirito Santo, where the few inhabitants are attacked by a legion of rotten zombies. Luís (Walderrama dos Santos) is the absent minded crab picker who, armed with a hatchet, open his way through the living dead, trying to win the love of Raquel (the beautiful Kika de Oliveira) while chopping off some heads. 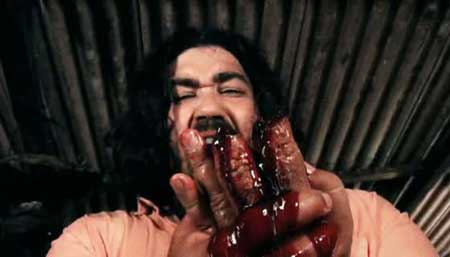 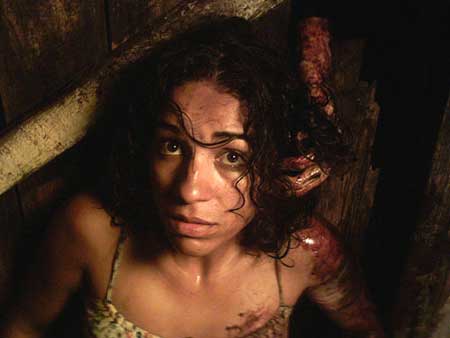 The plot takes a turn when Raquel is bitten by a zombie, and, with the help of an old lady (played by André Lobo – who’s a dude!) and a fisherman (Markus Konká), Luís has to find a special poison that can cure her before it’s too late. This whole subplot almost drags the pacing down, but to our good luck the zombies return for the movie climax, leading to a last scene where the main characters, soaked in blood, still have time to end things up with a smart last line.

The makeup effects are terrific, specially considering that this is a independent production. Aragão’s job with the zombies is amazing. Using animatronics and lots of latex, he makes a work of international standard, but without ever forgetting to present good characters to be mutilated. 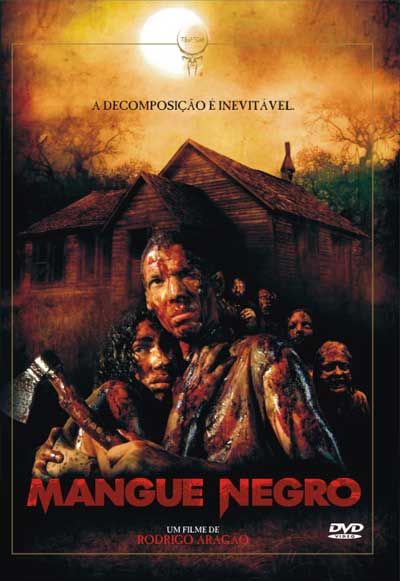 That’s his real secret. If the fake blood is a good sauce, the great characters are the filling that makes the movie special among others of it’s kind. Mud Zombies wouldn’t be half as successful without the amazing cast, specially dos Santos as the foolish and zany crab picker who becomes unlikely hero. His performance easily gets into the hall of fame of clumsy zombie killers, together with Ash, Shaun and Lionel. 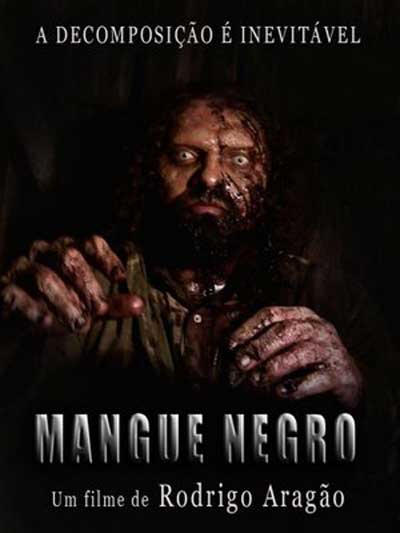 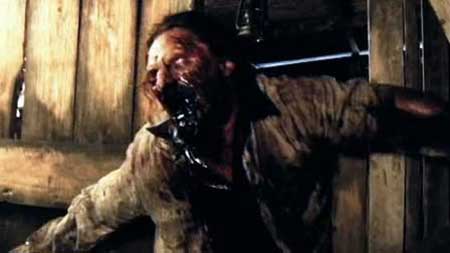 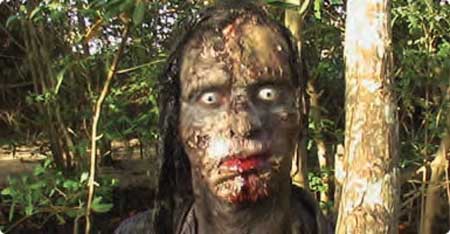 With this movie Aragão started his trilogy of ecologic horror, who continued in 2011 with the wild mix of horror and spaghetti western called Night of the Chupacabras, and is set to conclude with Mar Negro, a sea-monster story. Showing that it’s possible to be independent without being cheap, and being gory without being trash, he sets the new standard to follow. And who knows what can come next?