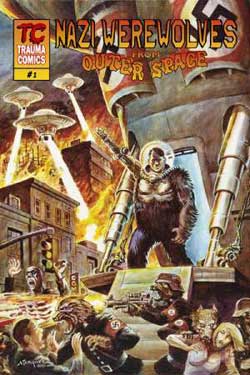 “Adolf Hitler has returned (with a new look!) and he brings Nazi Werewolves From Outer Space to conquer Earth. This debut issue features a young Jack Lynch who must rise to the occasion to save himself, and possibly the world. This is a 24 page, full color book, with no ads, and heavy card stock. As a bonus, original concept sketches of the characters are included. It is action-packed from the first to the last page. If you are a fan of sci-fi/horror, or just want to try something new, then this is the book for you! You will not be disappointed. On sale now at Indy Planet!”

Dying Breath: 3.0 out of 5
When you have a comic book combing Werewolves and Nazis, how can one go wrong? This issue was a fast paced action ride into the realm of Sci-Fi horror as the invaders came from the skies to take over the Earth. The artwork captured the intense pace very well, but there were a few things in terms of proportion and perspective that threw me off a little. I loved Juliette’s style on the Werewolves though, because he was able to give them all a different look/appearance so they weren’t all clones of each other. Like I mentioned the story is fast paced, and for a first issue this both works to an advantage to capture a new audience, but can also take away a little in terms of story build. I have no doubt that future issues will flesh things out more, so for now consider me on board. The dialogue is something you would expect to find from a B-Movie. While it had a rough spot or two there is something brewing here that should play out nicely. For everyone out there who knows the combination of evil you get when you mix Nazis, Werewolves and Aliens than I think you can know what to expect from this book. Overall a fun read that I look forward to seeing more of.

If you would like to buy or know more about Nazi Werewolves from Outer Space #1 you can find it at www.IndyPlanet.com