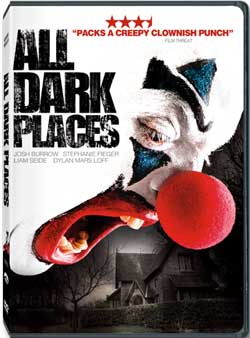 Jamie and Christian are giving their marriage one last shot for the sake of love and their young son, Dylan. But when Christian proves unable to hold up his end, forces both within and outside their relationship will decide their future.

Clowns have always been my thing…especially the wicked ones. But, I had yet to find one that frightened. Even Stephen King’s Pennywise (with exception of his teeth) is somewhat laughable to me. And, All Dark Places (2012 – Clownface Productions), a vivid attempt at being a psychological thriller, proved to be even more limited, falling completely flat in fear. However, on a good note, the clown does have a creep effect, even if it is sporadic. 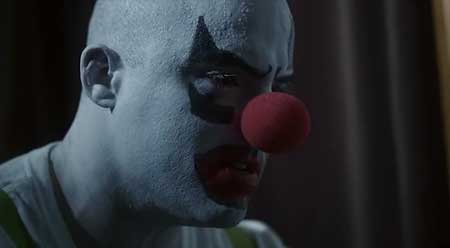 Christian (Joshua Burrow) is a former conniving cokehead con artist wannabe who, along with a previous band mate, secretly drinks heavily, ingests drugs and lives in delusions of grandeur while playing guitar in the basement after his wife Jamie (Stephanie Fieger) and son Dylan (Dylan Mars Loff) retire each night.

But, they are a couple with hidden problems. After a short separation, they have gotten back together to not only try to save their marriage, but to also save their son the hardship of divorce. With the aid of Dr. Spago (Tim Douglas), an odd counseling psychologist that appears to be more of a quack when suggesting that the couple drop acid together in order to grow closer, things begin to change and it appears as though the reconciliation may very well work as Christian avoids his old ways, becoming both a good father and husband. (Coincidently, the couple does take the advice of the quack and explore an acid trip together while Dylan is off visiting grandma one evening). 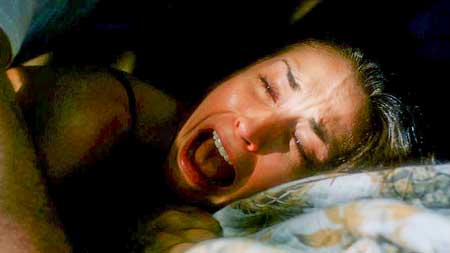 Of course, this reconciliation doesn’t last long as everyone (although the tale never really explains why) seems to become infected with dark psychological thoughts and being haunted by a horrible and vulgar no name clown (Liam Seide). Within this scope, Christian begins to occasionally see him at various places, even giving chase while out jogging. Jaime has a nightmare about him chasing her with a large butcher knife and Dylan (the innocent one who appears to be affected the most) speaks with him almost nightly, as the clown seemingly lives in his bedroom closet.

None-the-less, each begins a slow descent into personal madness (some more reserved than others) and we get to watch the downfall. While it is Christian whom director Nicholas Reiner primarily guides, making and wanting the audience to think it is simply he who is haunted the most by using subtle physical appearance changes, not all is what it seems. 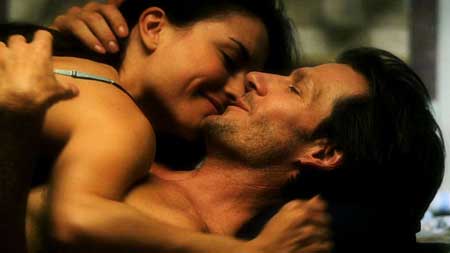 As mentioned earlier, fear, while kudos to writer / director Nicholas Reiner in both attempt and direction, does fall quite short, dragging out a storyline that at most times becomes a real snooze fest. Of course, when the clown appears, whether it be watching from the inside of a mirror, flashing in and out of a dream, or in a number of other places, he does offer a full creep effect, speaking with a vulgar dialect similar to Captain Spalding of House of a Thousand Corpses and The Devil’s Rejects fame with an added touch of loving father.

Otherwise, unless one suffers from coulrophobia (the fear of clowns) the impact never lingers and is yanked away as fast as it came when the film dives back into the boring humdrum of the family’s implied demented lives. And, with exception of a quick snippet between Christian and Jaime discussing a drunk Christian clown episode at Dylan’s birthday party, the origin of this clown is never fully explained and will certainly leave the audience wondering, having more questions than answers, all the way to the somewhat predicable ending.

While the film is made quite well, with complementing camera angles, fairly good acting including believable dialogue, and an enticing soundtrack, this alone doesn’t save the film’s lackluster storyline. So, if it is fear you’re seeking, All Dark Places is certain to be a letdown and might just want to be avoided completely.