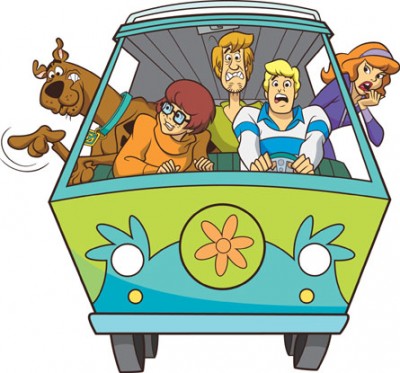 Warner Bros. and WWE Studios (NYSE:WWE) announced they will co-produce a Scooby-Doo animated feature that will find Scooby and the gang solving a mystery at WrestleMania®. The announcement was made today by Jeff Brown, Executive Vice President and General Manager, TV, Family & Animation, Warner Home Video and Michael Luisi, President, WWE Studios.
WWE Superstars and Divas including Triple H®, John Cena®, Kane, The Miz®, Brodus Clay™, Santino Marella®, Sin Cara™ and AJ™ will appear in animated form and lend their voices to the project. WWE Chairman and CEO Vince McMahon® will also lend his voice and appear in animated form.
“We are excited to partner with Warner Bros. on this wonderful animated film,” said WWE Studios President Michael Luisi. “Kids and adults are going to enjoy seeing their favorite WWE Superstars in animated form join forces with an icon like Scooby-Doo to solve a mystery at the biggest pop-culture event of the year – WrestleMania.”
“Warner Bros. is thrilled to get into the ring with WWE Studios to bring fans an unprecedented animated adventure,” said Jeff Brown, Executive Vice President and General Manager, TV, Warner Home Video. “We’re excited to leverage the WWE’s family-friendly brand and passionate fan base and integrate some of the most popular WWE Superstars and Divas within the Scooby-Doo gang.”
When Shaggy and Scooby win tickets to WrestleMania, the entire gang travels in the Mystery Machine to WWE City to attend the epic event. However, when a mysterious ghostly bear appears and threatens to ruin the show, Scooby, Shaggy, Velma, Daphne and Fred work with WWE Superstars to solve the case.