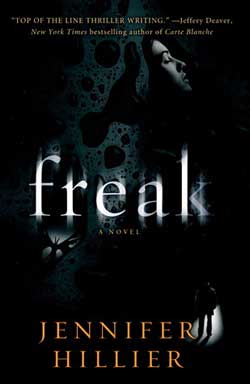 Thriller author Jennifer Hillier’s Freak can be described in a few words: brilliant, intense, fast-paced, terrifying and an edge of your seat thriller. Hillier’s master storytelling continues in her sequel to Creep, which was chosen by Suspense Magazine as one of 2011’s best novels. For only her second novel, she is an extremely talented writer who is a natural at the thriller genre. Freak picks up right where Creep leaves off; however, you don’t necessarily need to read the first one to understand the story of second book in the series. (Although they are so good, I would highly recommend reading both!)

Abby Maddox, the former lover of psychopath Ethan Wolfe, sits in her maximum-security prison cell serving a nine-year sentence for slashing a police officer’s throat in a moment of rage and fury. She has quickly become a celebrity because the high-profiled case has been a major news story. Inevitably, letters from demented fans, lunatics and creeps start pouring in. Bodies of naked young women are turning up dead all around Seattle. Their bodies are carved with the message “FREE ABBY MADDOX.” Does any of the letters from the demented fans hold any clues to the killings? That is what investigators hope to find.

The sequel also finds the return of Sheila Tao, Pugent Sound State University professor and recovering sex addict. Tao had an affair with Wolfe was one of his victims in Creep. After all of the terrifying events that occurred to her in Creep, she is just now starting to put the pieces her life together again and is looking forward to planning her wedding with her fiancé, Morris. However, the horror begins again for her as she is brought in to help with the latest murder victims, as Maddox has directly asked to speak with her.

Former Seattle PD officer and private investigator Jerry Issac also returns to find himself right back in the middle of the investigation. Maddox’s terrifying attack is still very fresh in his mind. It left him with hideous scarring, both physical and mental, and tortured speech since the knife penetrated his voice box. With a copy-cat killer on the loose, he finds himself back in the middle of Maddox’s mind tricks and manipulation. For Issac, it comes down to putting the pieces of the mystery together before he loses someone very close to him.

This is one book that you won’t want to put down. The plot is quickly and thoughtfully laid out, so there are no open questions as to what happened in the first book. The characters are memorable and interesting, which pulls you into the story. Isaac is desperate to find Maddox and help stop the recent killings. He and his former partner, Mike Torrance, work well together as they know each other inside and out. Isaac’s assistant, Danny Mercy, debuts in the second novel, and she does her own part to help Isaac with the investigation. Before she finds out about the latest killings, Tao finally feels like she is turning her life around and both she and her fiancé, Morris, are both likeable characters and you find yourself rooting for them. With her recovery from sex addiction and surviving Morris’ terrifying attack, she is starting to feel some peace in her life. Maddox’s character is definitely the most interesting. She is beautiful, manipulative and will do absolutely anything to get her way. The story is filled with all kinds of unthinkable twists and turns that will both surprise and horrify. The ending will definitely leave you wanting more. Freak is an absolute must-read for any fan of psychological thrillers.

Hillier is a member of International Thriller Writers, Mystery Writers of America, and the International Association of Crime Writers. The critically acclaimed Creep was her debut thriller, and Freak is her second novel. For more information about Jennifer Hillier: www.jenniferhillier.ca.