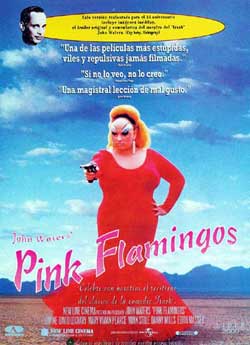 Divine has been proclaimed the “Filthiest person alive” by the local tabloids; don’t worry though she has just taken to hiding in Phoenix Maryland under the alias Babs Johnson. You see there is a problem with Divines plan though, her title reign is about to expire. Connie and Raymond Marble feel they are way filthier, and they have a lot of ways to show it. 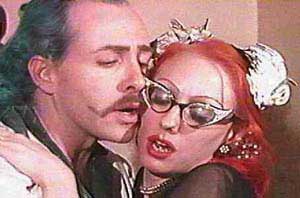 I am one of those genre fans that love to watch the crowd’s reaction when something horrible is happening on screen. I enjoy watching eyes widen and jaws slack open, it’s just as much fun as a jump scene in my opinion. This strange fetish has led me to be banned from many a friends movie night, and has caused more than one female to not return my phone call the next day. 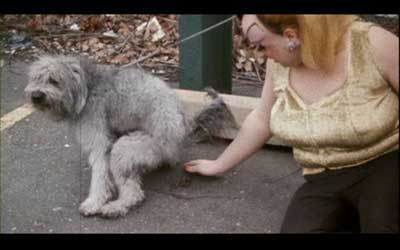 There are many movies out there that feature vile acts of outrageousness, but very few of these films can even hold a candle to John Waters cult classic Pink Flamingos. To truly understand the perverseness of this film you really have to look at the year that it came out 1972 to be exact. To put it mildly this film is offensive today, so imagine how offensive it was when it first hit the screens back in the early 1970’s. The DVD rerelease of the film is even rated NC-17, I realize that might not be saying much in this day of unrated horror classics gracing the shelves at Wal-Mart’s across America. I however would not hold my breath hoping to find a copy of Pink Flamingos at your local Wal-Mart though.

The story behind Pink Flamingos is a pretty simple one. Famous drag queen Divine pretty much plays herself, and she has been dubbed by the media as “the filthiest person alive.” This sudden burst of fame has caused Divine to move to Phoenix Maryland with her egg obsessed mother (who spends most of her time in a play pen); her demented and twisted son Crackers, and her traveling companion Cotton. The four of them live in a trailer, where the yard is decorated with pink flamingos (get it?). 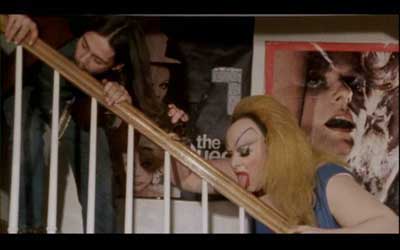 Things seem to be going quite well for Babs and her cohorts though, the mother of course is complaining that she is starving and in need of a visit from the “egg man”. Bab’s however doesn’t have time to deal with her mother; she hasn’t been in love for three whole days and its time for her to go out find some. Crackers of course wants to also catch a ride into town.

During these initial beginning sequences we learn to realize why Divine/Babs holds her title. I’m going to keep it straight with you here, Divines presence on the screen is what makes this film, every time she is on camera she is just on, and there is nothing she won’t do. We of course see scenes involving Divine and Crackers almost running a person off of a road, we also see Divine shoplifting by sticking a raw steak up her skirt and holding it there (later in the film she refers to it as seasoning), we also see her urinating in public while the steak is still in place. 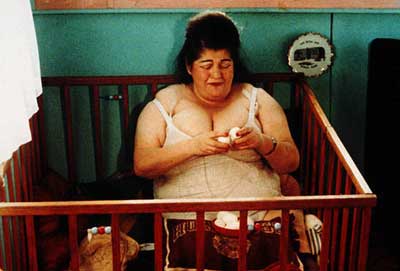 There wouldn’t be much of a movie however if it was just Bab’s and her family so we are introduced to the Marbles. The Marbles truly believe they are the filthiest people on the planet. Before punk came onto the scene with its vibrant hair colors you had Connie and Raymond Marble with their red and blue tinted hair. The Marbles aren’t alone however; they have an assistant named Channing.

The Marbles seem to have their hands in all kinds of nasty business from drugs, to streaking (there are a few funny scenes involving Raymond Marble flashing his genitals at unsuspecting women). The most disturbing thing they do however is run a baby ring. 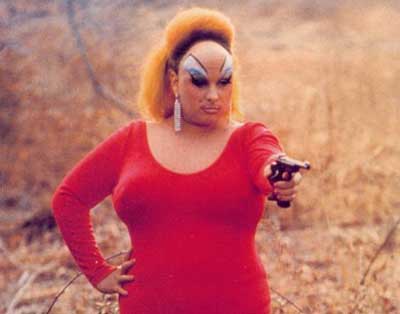 How do they run this baby ring you ask? It’s really simple really, you see the Marbles kidnap women (two at a time) and keep them in their basement. When the women are confined to the basement they force Channing to have sex with them, so that the women will get pregnant. It’s a risky operation and its run fairly dirty. The babies that are born are then turned around and given to lesbian couples interested in adopting children (do I need to remind you this was made in 1972 again?). In one of the most disturbing scenes involving this subplot Channing decides he is tired of having sex with the captured women and instead masturbates in front of the one of the women who is awake, and then sucks his semen up into a needle and injects it into an unconscious woman in an effort to try to artificially inseminate her. 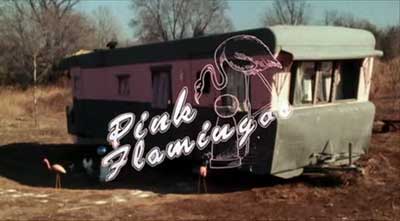 Connie reads the tabloids and follows the press and learns about Divine being called the “filthiest person alive” this of course this leads to the Marbles trying to find out where Divine is hiding, after all Divine is simply a gross out murderess. The Marbles are way more filthy and they intend to prove it, but first they have to find out where this Divine is hiding. Through use of various spies they discover her whereabouts and go about finding a young sexpot to exploit young Crackers to get information. The young sexpots name is Cookie; Cookie of course sets up the date with Crackers and is brought home to meet the family. The next scene is one of the most infamous, mainly due to the harm done to the animal. Crackers has sex with Cookie, while squeezing the life out of a chicken by using him and Cookies bodies. Cotton of course watches this whole show from a window outside. Cookie quickly runs back to her bosses the Marbles and let’s loose all of the information that she has learned. This results in the Marbles doing what any self respecting filthy person would do, they mail Babs’s family a turd, in what probably is one of the funniest scenes in the film. From that moment on Divine/Babs declares war on the Marbles, and she intends to prove to the world that she is indeed the filthiest person in it. 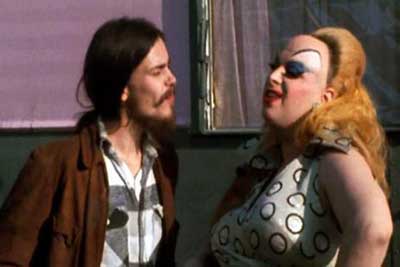 The plot behind Pink Flamingos is pretty simple, and it just gets more and more vulgar as it goes on. There were multiple scenes that while viewing I simply could not believe were able to be released in the early 70’s. Make sure to pay attention to the scene for Divine/Babs’s birthday, just make sure you warn someone before the guy comes on screen lip-syncing to Surfin’ Bird with his anus (yes it shows it). Who could also forget the scene where the police who show up to raid the party are cannibalized?!? 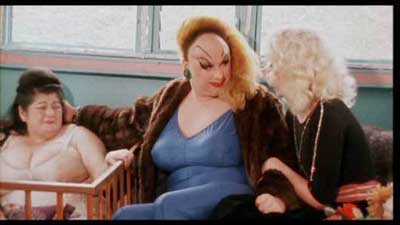 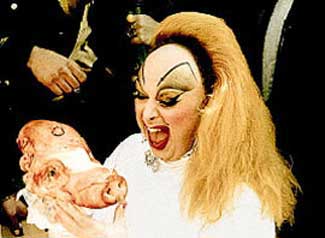 Then there is of course the most infamous scene of all in the film, the scene that most people vision in their head when you merely mention Pink Flamingos. Yes I am talking about the infamous dog walking scene, for those who are virgins to the film I will not ruin the moment for you, but I wish that I could be there to see the look of disgust on your face.

Pink Flamingos isn’t for the easily offended or disgusted, however it is an experience that if you are brave enough to endure you will remember for a long time.